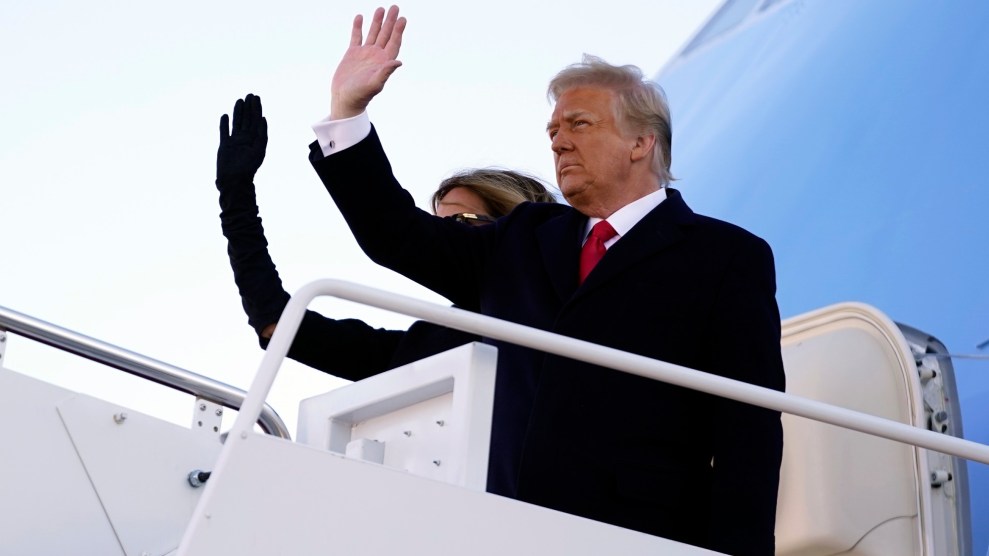 With his final acts before leaving office, President Donald Trump revealed a deep contempt for his supporters—and for the platform he ran on.

At around 1 am Wednesday, his last day in office, Trump undid his most prominent effort to “drain the swamp,” rescinding an order that had required members of his administration to pledge never to take jobs lobbying the US government or lobbying on behalf of foreign states after leaving their posts. His ex-staffers are now free to lobby. And Trump issued 144 last-minute pardons and commutations, many of which effectively endorsed corruption and undermined his claim to support “law and order.”

Trump pardoned Steve Bannon, who was charged with conning some of Trump’s most ardent fans, and he pardoned former lawmakers whose corruption came at the expense of taxpayers. Bannon was indicted last summer on charges that he conspired to defraud hundreds of thousands of people who donated money to privately fund the border wall that Trump had insisted Mexico would pay for. He had pleaded not guilty and was awaiting trial. Bannon, Trump’s former campaign chief, broke with Trump in 2017 and was forced out of a White House job. But he returned to the president’s good graces in part by aggressively pushing unsupported allegations about Joe Biden ahead of the election, and by supporting Trump’s false claims that he would have won a second term but for election fraud.

Trump also pardoned Elliott Broidy, a former top fundraiser for Trump and the Republican National Committee, who pleaded guilty last fall to conspiring to violate lobbying disclosure laws in a secret effort to advance Chinese and Malaysian interests. That push included Broidy pressing the Justice Department to end an investigation into massive embezzlement from a Malaysian state investment fund, in exchange for at least $8 million in payments from a top target of that probe. Broidy told associates he had personally lobbied Trump about the Justice Department case, though he said at a plea hearing that his claim was false. Trump did not pardon people alleged to have worked with Broidy in the lobbying scheme, including Pras Michel—the rapper and former Fugees members—and Nickie Lum Davis, a GOP donor whose contributions to Republicans have been significantly smaller than Broidy’s. Davis pleaded guilty in August to aiding and abetting foreign lobbying violations. Michel has not been charged in the scheme but was indicted in 2019 for campaign finance violations; he pleaded not guilty.

Trump previously pardoned Paul Manafort and Roger Stone, former campaign advisers who had earned Trump’s praise—and strong hints of the clemency to come—when they refused to cooperate with special counsel Robert Mueller’s investigation into Russian interference. Mueller found that Trump’s campaign had sought to benefit from Russian meddling in the election but did not find proof that the campaign had conspired with Russia. Mueller noted that the refusal of Manafort, Stone, and others to come clean with investigators had stymied the probe.

On Tuesday, Trump pardoned Paul Erickson, a marginal Republican figure with a modest role in the Russia investigation—Erickson dated alleged Russian agent Maria Butina and assisted Russian efforts to establish backdoor contact with the Trump campaign. Trump’s description of that pardon said Erickson’s conviction “was based off the Russian collusion hoax.” In fact, Erickson pleaded guilty to defrauding would-be investors in real estate in North Dakota and other ventures by pocketing the funds. The schemes allegedly predated the Russia probe by years. Trump’s pardon essentially declares that Erickson should avoid prosecution for his financial crimes because he was involved in the Russia investigation.

Some of Trump’s pardons seem to endorse public corruption, or at least to side with former lawmakers prosecuted for it by the Justice Department. Trump pardoned former Rep. Randy “Duke” Cunningham, a California Republican who pleaded guilty in 2005 to accepting bribes from defense contractors, and former Rep. Rick Renzi, an Arizona Republican convicted in 2013 on money laundering and other federal charges related to a land swap scheme. Trump also commuted the sentence of former Detroit Mayor Kwame Kilpatrick, a Democrat convicted of public corruption charges in 2013. Kilpatrick reportedly previously sought a commutation from former President Barack Obama.

Trump commuted the prison sentence of Salomon Melgen, a major Democratic donor and Florida eye doctor who was convicted of stealing $73 million from Medicare by billing for unnecessary tests and treatments he gave to elderly patients. Melgen was a close friend and political backer of Sen. Robert Menendez (D-N.J.). Federal prosecutors indicted and tried Menendez in 2017 for accepting gifts and free travel from Melgen in exchange for official acts to help Melgen’s businesses, but they dropped the case after a hung jury resulted in a mistrial.

About an hour before Joe Biden was sworn in as president, Trump gave a pardon to Albert Pirro, the ex-husband of Fox News host and ardent Trump booster Jeanine Pirro. Albert Pirro who was convicted of tax fraud in 2000.

Trump’s personal lawyer Rudy Giuliani, WikiLeaks founder Julian Assange, and NSA whistleblower Edward Snowden did not receive pardons, despite widespread speculation. Nor did Kushner or Trump’s children receive preemptive pardons the president reportedly mulled. And Trump did not attempt the legally dubious step of pardoning himself.

Giuliani, who reportedly is under investigation by federal prosecutors in Manhattan for potentially violating foreign lobbying laws, did not respond to a request for comment. He denies wrongdoing and has told some reporters that he did not need or seek a pardon.

Trump also did not use his power, as some feared, to undo charges against supporters who stormed the US Capitol Building this month, including individuals who asked for pardons and said they acted at Trump’s behest. And Trump leaves office having given clemency to fewer people than any of his recent predecessors.

Freedom for former aides to lobby. Pardons for allies, the rich, and the famous. “Have a good life” to the rest of Americans. That was Trump’s parting message.