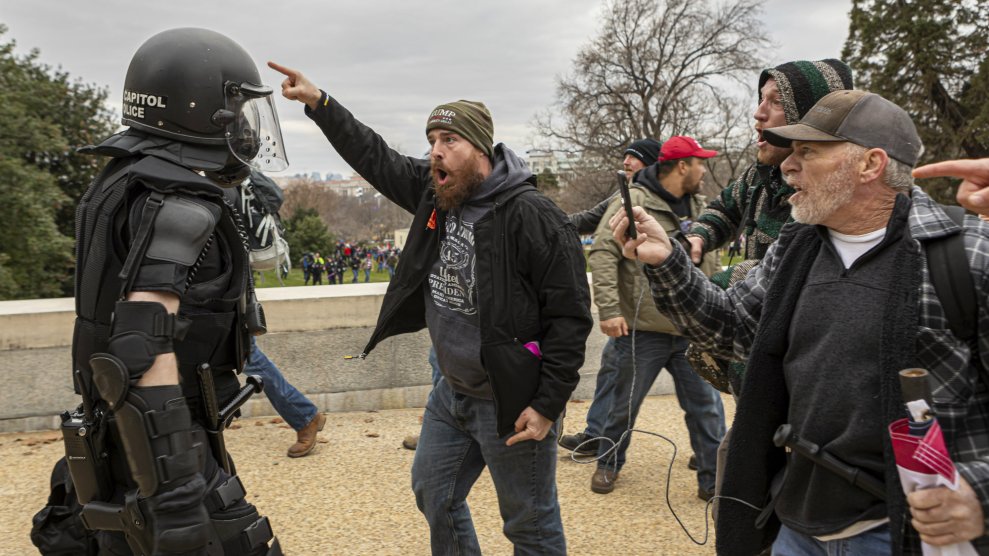 A US Capitol Police officer is among the dead in the aftermath of the violent mob that seized the Capitol on Wednesday. Officer Brian Sicknick, who had been on the force since 2008, was “responding to the riots on Wednesday, January 6, 2021, at the US Capitol and was injured while physically engaging with protesters,” USCP spokesperson said in a statement. The 42-year-old officer’s death brings the current death toll from the rampage to five.

His passing is a grim illustration of a recurring theme among many Trump supporters and the president himself: Blue lives never really mattered at all. Championing them has merely served as another vehicle for asserting white supremacy. When the Black Lives Matter protests exploded in the wake of the Minneapolis  police killing of George Floyd, a Black man, Republicans, conservatives, and far-right extremists condemned the protesters, falsely claiming that the demonstrations were an unjust attack on law enforcement.

Police use of excessive force was essential for maintaining these right-wingers’ cherished value of “law and order,” and “Blue Lives Matter” became their de facto rallying cry. At their own protests, they waved “Thin Blue Line” flags while President Donald Trump made it clear that he and his supporters would always be the party police officers could rely on. Law enforcement returned the favor. In August, the New York City Police union broke a longstanding tradition and endorsed Trump for president. “Most politicians have abandoned us, but we still have one strong voice speaking up in our defense,” Patrick Lynch, the union president, said in a statement accompanying the formal endorsement.

What really matters is supporting police brutality against Black people and BLM protesters. Without those enemies, all bets are off.

But the conservative rhetoric was and always has been a sham. As Officer Sicknick was suffering from the attack that would eventually kill him, the very insurrectionists who created the circumstances for his death flew pro-police flags outside on the Capitol lawn. But make no mistake, Blue Lives Matter has never actually been about supporting law enforcement. It’s been about trafficking in this implicitly racist message: What really matters is supporting police brutality against Black people and BLM protesters. Without those enemies, all bets are off.

Wednesday’s killing is hardly the first time Trump supporters have serenely ignored their own hypocrisy. Last month, Joe Presti, a bar owner from Staten Island, New York, hit a police officer with his car while evading arrest for repeatedly violating coronavirus restrictions. As I wrote in December, conservatives love supporting police until they’re the ones being policed:

A police statement said that they attempted to arrest Presti after observing people inside the bar, but the bar owner got behind the wheel, ran his car into a New York City sheriff’s deputy, and drove 100 yards with that deputy perched on the car like some life-sized hood ornament.

And who could forget the so-called lockdown protesters? Early in the pandemic, when most businesses across the country were closed down and local officials were asking people to stay home, conservative protesters took to the streets to demand the right to get a haircut or eat at Olive Garden. In Michigan, protesters taunted police officers. Last August, in Boise, Idaho, in what now looks like a dress rehearsal for what took place at the US Capitol, armed and unmasked Trump-supporting protesters shattered a door at the state legislature and overwhelmed police to enter a coronavirus hearing. As I wrote in September:

Even though they were carrying weapons and shattered a glass door while protesting, law enforcement officials declined to intervene or arrest any of them. Fearing for her own safety, a Democratic lawmaker left the hearing, but state troopers told local media that they didn’t attempt to arrest any of the protesters because they feared doing so would escalate violence.

No need to ask, really, but what would have happened if most of the people in this mob had been Black?

Perhaps, if the conservative movement had any moral compass, the cognitive dissonance of flying Thin Blue Line flags but engaging in violence against police officers when it suits their own racist agenda, would send the members of the mob at the Capitol into a tailspin. But they were only acting on orders from their leader.

During the insurrection, and before Trump was briefly banned from Twitter, the president offered a half-hearted tweet calling for peace. But the message was more “be nice to law enforcement” than “stop the violence.” It was a tacit recognition that his brand was built on backing the cops.

PLEASE notice how this is "be nice to police" not "go home storming the capitol is bad, actually" https://t.co/bQOxZAphwV

Clearly, his supporters at the Capitol did not seem to have gotten the message.

On Friday, the Department of Justice, US Capitol Police, and the DC’s Metropolitan Police Department announced that it would be investigating Sicknick’s death as a murder. When Trump made his grand return to Twitter, his first message was to his supporters: “They will not be disrespected or treated unfairly in any way, shape or form!!!” But, he said nothing about the police officer they killed. Instead, the “LAW AND ORDER” president who’d spent four years decrying the violence and destruction by some, made it clear that violence and destruction were his real priorities all along.