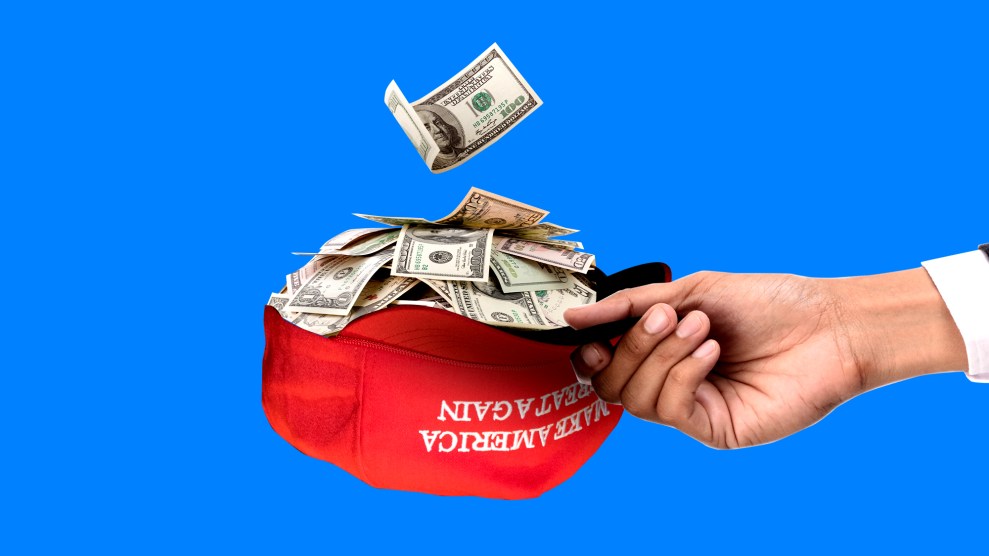 Dozens of major companies, from Amazon to Walmart, have rushed to distance themselves from President Donald Trump following last week’s mob attack on Capitol Hill. Some have done the same with other GOP politicians who behaved despicably by parroting the president’s election fraud lies, and then officially (and opportunistically) taking steps to overturn the results of a overwhelmingly fair and democratic presidential election.

The companies in question appear to have concluded that supporting a twice-impeached president and his minions is not the greatest look for their brands. Most have, at least temporarily, halted political giving to the so-called “Coup Caucus.” But it was the financial support of those same Republicans by corporations and dozens of individual billionaires that enabled this mess in the first place.

The Institute for Policy Studies (IPS) has long been interested in how wealthy donors use their political influence to enrich themselves—a strategy that has worked out rather well during the pandemic. Both parties, of course, have billionaires in their corners, the biggest of whom, reflecting the nation’s partisan divide, now give exclusively (or nearly so) to one side or the other.

On the Republican side, IPS’s Chuck Collins and Omar Ocampo have compiled a list of 63 billionaires, with estimated combined assets of almost $244 billion, who helped bankroll this post-election fiasco by giving generous personal contributions to Trump Victory—the joint fundraising venture set up between the Trump 2020 campaign and the Republican National Committee after the 2018 midterms to secure the reelection of Trump and his congressional loyalists. This group represents just a fraction of America’s estimated 788 billionaires, but its steadfast support has been enough to put—and keep—many a reality-denying scoundrel in office.

Here’s a guide to the Top 10 billionaire Trump Victory donors, plus a few bonus bagmen, based on IPS’s research and data from the Federal Election Commission campaign finance database. All donations below are for the 2020 election cycle, and with a few minor exceptions, all went to Republicans. Figures are rounded and include contributions in the name of the billionaire’s current spouse.

Isaac Perlmutter
Net worth (est.): $5.8 billion
Source of wealth: retired CEO of Marvel Entertainment
Trump Victory: $1.9 million
Overall: $26 million
Fun fact: In August 2018, ProPublica revealed that Perlmutter and two fellow members of Trump’s Mar-a-Lago club were given leave to dictate doings at the Veterans Affairs department, where they “hovered over public servants without any transparency, accountability or oversight.” The three men spoke daily with VA officials “reviewing all manner of policy and personnel decisions.” And VA “officials travelled to Mar-a-Lago at taxpayer expense to hear their views. ‘Everyone has to go down and kiss the ring’ a former administration official said.”

Robert Duggan
Net worth (est.): $2.6 billion
Source of fortune: biotech and investing; former CEO of Pharmacyclics
Trump Victory: $1.6 million
Overall: $4.3 million
Fun fact: Duggan is a devoted Scientologist, and one of the Church of Scientology’s top donors, if not its biggest, with total contributions exceeding $360 million. “I’m not looking for bragging rights,” he told the Tampa Bay Times in 2019. “I read something from [Scientology founder L. Ron Hubbard] every day and I apply it all throughout my life.”

Steve Wynn
Net worth (est.): $3 billion
Source of fortune: casinos; developed the Mirage, the Golden Nugget, and the Bellagio, among others
Trump Victory: $1.5 million
Overall: $15 million
Fun fact: Wynn resigned as a Republican National Committee finance chair in January 2018 after a Wall Street Journal report revealed allegations of sexual harassment against him.

Sheldon Adelson
Net worth (est.): ~$36 billion
Source of fortune: casinos; founded Las Vegas Sands Corp.
Trump Victory: $1.2 million
Overall: $220 million
Fun fact: Although Sheldon died this past week, he and his wife, Miriam, were not merely Donald Trump’s top donors, they led the pack in all federal giving during the 2020 cycle. Sheldon’s heirs certainly won’t starve. Some time back, Bloomberg reported that the Adelsons deployed a series of complex trusts to transfer at least $7.9 billion to them, thereby avoiding $2.8 billion in federal gift and estate taxes.

Daniel Andrew Beal
Net worth (est.): $7.5 billion
Source of fortune: banking; founded Beal Bank
Trump Victory: $1.2 million
Overall: $1.6 million
Fun fact: Beal, a numbers whiz, is known in math circles for sponsoring a prize related to a formula called the Beal Conjecture. If you can prove or disprove it, he will give you $1 million. (Trump did not solve the conjecture, of course, but he managed to get lots of Beal’s cash anyway.)

David Duffield
Net worth (est.): $13.3 billion
Source of fortune: software; cofounded PeopleSoft and Workday
Trump Victory: $1.2 million
Overall: $2 million
Fun fact: In 1994, Duffield and his wife, Cheryl, created a $300 million fund—later named in honor of their late miniature schnauzer—to facilitate the fostering, adoption, and spaying or neutering of cats and dogs. From the eponymous Maddie’s Fund website: “While playing together in the living room one evening, they made her a promise: If they ever had any money, they would use it to help companion animals and the people who love them, so they could experience the same joy they had with Maddie.”

A Few Other Notables

John Paulson
Net worth (est.): $4.2 billion
Source of fortune: Hedge funds
Trump Victory: $831,372
Overall: $2.9 million
Fun fact: The former Trump advisor, who cashed in by betting against subprime mortgages in the run-up to the Great Recession, famously sent an angry letter to his daughters’ upper-crust private school, complaining that their assigned reading amounted to “anti-white indoctrination” and promising to stop his family’s donations.

Robert Wood Johnson IV
Net worth (est.): $2.5 billion
Source of fortune: inheritance (Johnson & Johnson)
Trump Victory: $925,000
Overall: $3.6 million
Fun fact: “Woody” Johnson is Trump’s ambassador to the U.K. and the owner of the Jets football team. Back in 2006, Senate investigators accused Johnson and others of taking part in a tax scam that cheated the Treasury out of some $300 million. (The scheme involved buying up about $2 billion in capital losses that the men then allegedly used to erase taxable gains from selling stock.) Johnson claimed his lawyers told him the scheme was “consistent” with the tax codes, according to the Washington Post, but in the wake of an IRS challenge, he agreed to pay all taxes due, with interest.

Stephen Schwarzman
Net worth (est.): ~$21 billion
Source of fortune: private equity; cofounded the Blackstone Group
Trump Victory: $355,000
Overall: $45 million
Fun fact: In August 2010, after the Obama administration proposed raising the tax rate on carried interest—the IRS allows fund managers to pay far lower taxes on these investment profits managers take as compensation than ordinary workers pay on their wages—Schwarzman was upset. He likened the plan to “a war,” adding: “It’s like when Hitler invaded Poland in 1939.” (He later apologized.)

Ronald Steven Lauder
Net worth (est.): $5.2 billion
Source of fortune: inheritance (Estée Lauder Companies)
Trump Victory: $100,000
Overall: $5.5 million
Fun fact: A 2011 New York Times investigation revealed Lauder’s extensive use of sophisticated tax avoidance schemes, including once-popular tactics that the IRS had come to view as abusive. The Times also noted that, of Lauder’s more than $600 million worth of stock in the family cosmetics business, nearly $400 million was being used as collateral to secure various lines of credit: “Many financial planners consider it imprudent for principal shareholders in a company to borrow against their stock. But it remains a popular way for wealthy taxpayers to get cash out of their holdings without selling and paying taxes.”