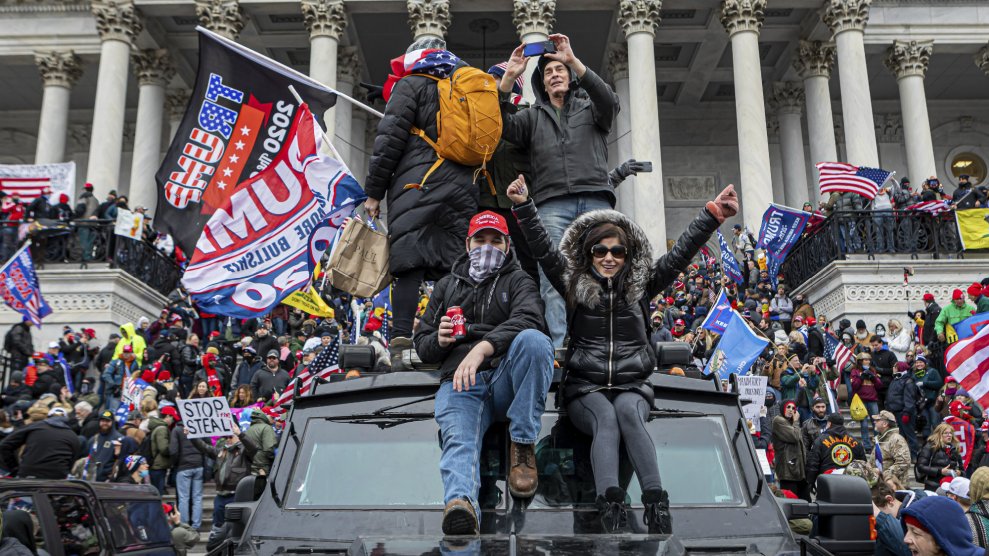 While a joint session of the US Congress was in the process of attempting to certify President-elect Joe Biden’s election win, a violent white mob incited by outgoing President Donald Trump descended upon the Capitol. As some Republican senators lied about the election outcome, their fervent supporters breached security barriers and stormed the building, breaking windows, destroying offices, and stealing items. I haven’t screamed that much at a television since the gassing at Lafayette Square last summer. It was jarring to see footage of lawmakers—many of whom had implicitly and explicitly supported the core beliefs of this mob—hiding, while pro-Trump extremists romped about as if they were on a school field trip.

It’s already been said countless times and yet is still worth repeating: The response to Black people storming the Capitol likely would have ended in mass bloodshed. One need only consider the treatment of Black Lives Matter protesters this summer. When white police officer Derek Chauvin killed George Floyd, a 46-year-old Black man in Minneapolis, by kneeling on his neck for nearly nine minutes, demonstrators in Minneapolis started a protest movement that quickly swept the rest of the country, including Washington, DC. There soon appeared a series of viral videos: police officers in Buffalo, New York, shoving an elderly man; cops using their vehicles to mow down peaceful protesters; and children being tear-gassed. And who can forget the searing image, not far from the scene of the rampage at the Capitol yesterday, of law enforcement gassing peaceful protesters so Trump could cross the street for a photoshoot, during which he held a Bible while standing in front of a historic church.

When it was all said and done, 14,000 people were arrested nationwide and 400 in DC over a three-week period at those racial justice protests.

For reference, there were 14,000+ arrests at the George Floyd protests.

Contrast the scenes of police violence with what unfolded at the Capitol yesterday. At one point, I saw a white woman joyously dancing on the steps as if she were warming up for a jazzercise class as opposed to participating in seditious act. There was footage of a police officer in riot gear helping a woman gingerly walk down the stairs. The insurrectionists took tourist-style pictures and videos of themselves strolling through the building holding Don’t Tread on Me, Thin Blue Line, and Confederate flags.

What a photo by my @Reuters colleagues pic.twitter.com/dvsR3kRv94

It’s always offensive to see white people parading around above the law, flexing their privilege, while the police stand by helplessly. But after the treatment of BLM protesters this summer, seeing Trump supporters in the Capitol, congratulating themselves for their casual federal crimes, I was enraged by law enforcement response. Black people have been killed for having a toy gun, or for selling loose cigarettes, or sleeping in their own beds. But suddenly, police knew how to deescalate and how to nonviolently intervene. It was an astounding display of deference to a racist mob. As the New York Times reported an interaction between a Capitol Police officer and the crowd: “‘You guys just need to go outside,’ he said to a man in a green backpack. Asked why the police were not forcing the mob out, the officer said, ‘We just got to let them do their thing for now.'”

The obvious difference between BLM protesters and the mob that stormed the Capitol is that one is a multiracial coalition while the other is an overwhelmingly white right-wing crowd.

The obvious difference between the two groups—BLM protesters and the mob that stormed the Capitol—is that one is a multiracial coalition while the other is an overwhelmingly white right-wing crowd. This is the variable that determines who will be met with force and who will pose for photos with items looted from the Capitol while “doing their thing.”

The Capitol takeover occurred partly because of police deference but also because they were outnumbered. I watched TV footage of a lone Capitol police officer intermittently waving his baton at a teeming crowd and running away from the mob. This lack of preparedness sheds light on yet another implicitly racist problem. During the George Floyd protests in DC, law enforcement flooded the streets. But they didn’t even bother to prepare for white violence.

Wednesday’s violence was not only a reaction to Trump’s election loss, but rather a violent whitelash, partly in response to a changing world and to what BLM protesters have been demanding all along: An end to the racial order and equal justice for all. The man flying the Confederate flag in the halls of Congress revealed one of the fundamental reasons why a violent mob was treated the way they were. Refusing to accept a loss delivered by a multiracial coalition is, for some people, a shared American experience that plays out repeatedly.

For centuries, violent white mobs have sought to crush multiracial uprisings in order to maintain white supremacy. Consider the Coushatta massacre that occurred during Reconstruction. After the Civil War, Marshall Twitchell, a white Union veteran who had been the captain of a Black regiment during the war, was elected to the Louisiana State Senate. He appointed several members of his family to local positions and was active in Reconstruction and bridging alliances between whites and Blacks in the Republican Party. In 1874, Thomas Floyd, a Black Republican was murdered by members of a white paramilitary organization that was still upset with the outcome of the war that freed Black people from enslavement.

After Floyd was murdered, the white perpetrators falsely accused Twitchell of attempting to incite a “Negro rebellion.” (In today’s parlance, I believe the term would be antifa.) The paramilitary perpetrators arrested six white Republicans and 20 Black people. The rumors of the fictional “Negro rebellion” spread and, within two days, the area was filled with armed whites, ready to fight. When it was all said and done, six white officeholders and at least four Black people were murdered. A few perpetrators were arrested but no one was ever convicted. This was just one episode in the long racist history of how Reconstruction ultimately was demolished and Jim Crow—legal racial segregation—replaced outright enslavement.

Trump has spent his presidency—indeed he seems to have spent his entire adult life—using a racist bullhorn to describe Black people, and this summer to characterize Black protesters. “When the looting starts, the shooting starts,” he tweeted in May. The saying was popularized by the white Miami chief of police in 1967. Trump encouraged police officers to use extreme force and called for lengthy prison sentences for protesters who toppled Confederate monuments. The police took his encouragement seriously. After all, the social hierarchy that had defined America since its founding was being threatened by these demonstrators.

One could draw a straight line of causality from those days to the events on Wednesday. The same people who demanded law and order from Black Lives Matter protesters and decried any type of crime or violence—hadn’t they championed the Blue Lives Matter cause?—had now broken into the Capitol Building. Much of law enforcement’s response included “talking them down” to “taking selfies with the insurrectionists.” Meanwhile, members of the mob took photos in Speaker Nancy Pelosi (D-Calif.) congressional office, engage in an armed stand-off with Capitol police, and forced elected officials to hide in their respective chambers as they tried to ram the doors.

Cops are taking selfies with the terrorists. pic.twitter.com/EjkQ83h1p2

There was, of course, a violent exception the rule. One woman, an insurrectionist, was shot and killed by Capitol Police. It still remains unclear how and why she was killed while thousands of others were able to roam the Capitol, or why literal bloodshed did not end the siege. John Catanzara, head of Chicago’s police union, which had harsh words for protesters last year, sympathized with the mob.

Some of the Trump supporters reportedly reacted with surprise when they were on the receiving end of police violence.

Almost from the moment the mob entered the Capitol, the lackluster police response captured a great deal of attention and a host of alleged reasons have already surfaced. Capitol Police have said they had no idea Trump supporters were planning on storming the Capitol, despite the fact that the perpetrators had been planning such an event for weeks. In a statement, the Capitol Police seemed to argue that because this was criminal behavior and not a protest, they didn’t have a plan. “The USCP had a robust plan established to address anticipated First Amendment activities,” Sund said in a statement. “But make no mistake—these mass riots were not First Amendment activities; they were criminal riotous behavior.”

Despite the violence and chaos of Wednesday, Congress went home the following morning. High-ranking officials in the Democratic party have called for the removal of Trump, but it still seems unlikely that the elected officials who incited the insurrectionists will face any real consequences. And who knows what will happen, in the end, to the Inciter-in-Chief? If history is any indication, failing to hold white supremacists accountable for the violence they inflict, just makes the country more vulnerable to another attack. And it’s often been observed that Trumpism will long outlast Trump—indeed it preceded him by another name.

It is American tradition to kneecap anyone who attempts to dismantle white supremacy. For the thousands of white insurrectionists, scaling the Capitol and flying Confederate symbols nearly 200 years after losing the Civil War, when Trump finally spoke, he did not condemn their actions. Instead of demanding an end to the siege, instead of uttering the requisite “This isn’t who we are” bromides, Trump released a mawkishly sentimental video message. “Go home,” he said in a pathetic, more-in-sadness-than-in-anger non-attempt to slow down the violence he’d encouraged. “We love you.”