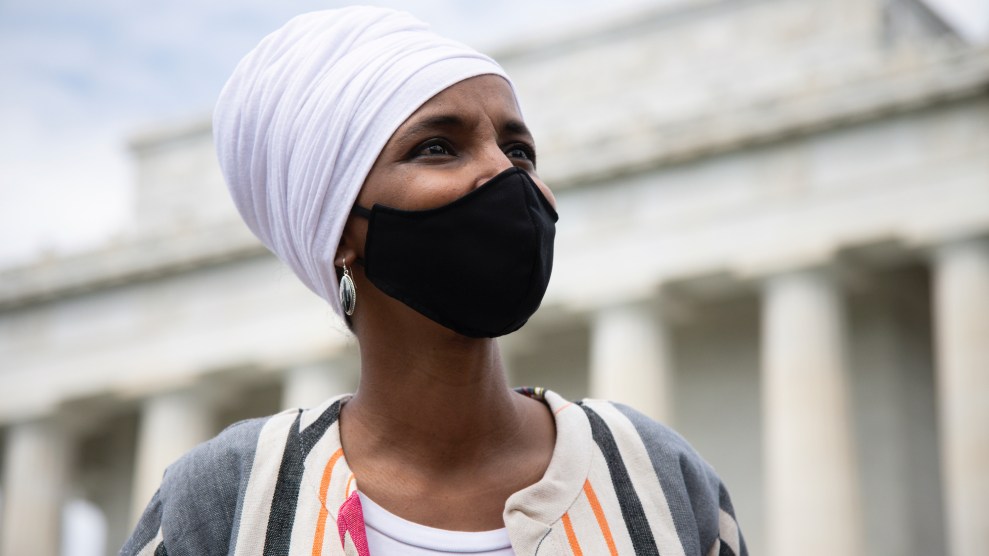 After President Donald Trump incited a violent mob to storm the US Capitol on Wednesday, Democrats in Congress and a Republican governor are calling for Trump to be removed from office before his term expires on January 20.

Rep. Ilhan Omar (D-Minn.) announced she was drawing up articles of impeachment late Wednesday afternoon. “Donald J. Trump should be impeached by the House of Representatives & removed from office by the United States Senate,” she tweeted. “We can’t allow him to remain in office, it’s a matter of preserving our Republic and we need to fulfill our oath.” Over the course of Wednesday evening, at least three dozen House Democrats also announced their support for impeachment. Many of those in favor are, like Omar, members of the party’s left flank, a group that had been quick to call for the president’s impeachment early in his term. But a number of moderate lawmakers—such as Reps. Jennifer Wexton (D-Va.) and Mike Thompson (D-Calif.)—have backed the measure, as well.

Among their Senate colleagues, Sen. Ed Markey (D-Mass.) called for Trump’s impeachment on the Senate floor Wednesday night. Sen. Chuck Schumer (D-N.Y.)—who will soon become Senate majority leader—called upon administration officials to invoke the 25th Amendment, which allows for the removal of a president from office when he or she is deemed unfit to serve. If they do not, Schumer said in a statement Thursday morning, “Congress should reconvene to impeach the president.”

Rep. Katherine Clark (D-Mass.), the assistant speaker of the House and the chamber’s fourth highest-ranking member, called for Trump’s removal, though did not specify by what means. “Donald Trump is a traitor to our country and our Constitution,” she said in a statement. “He must be removed from office and prevented from further endangering our country and our people.” Rep. Jim McGovern (D-Mass.), chair of the House Rules Committee, similarly demanded Trump’s ouster. Rep. Richard Neal (D-Mass.), the chair of the House Ways and Means Committee who has been famously cautious when censuring the president, is among those calling for the 25th Amendment to be invoked.

Rep. Cori Bush (D-Mo.), a newly installed member of the Squad, plans to issue a resolution calling for the expulsion of Republican members of Congress who supported Trump’s efforts to overturn the election results. “I believe the Republican members of Congress who have incited this domestic terror attack through their attempts to overturn the election must face consequences,” she wrote on Twitter. “They have broken their sacred Oath of Office.”

House Speaker Nancy Pelosi has not indicated whether she supports moving forward with any new formal punishment of the president. Congress has adjourned until Joe Biden’s inauguration later this month.

The calls represent an abrupt shift among Democratic lawmakers who seemed eager to move on from Trump’s misdeeds when the new Congress convened earlier this week. News that Trump had pressured Georgia Secretary of State Brad Raffensperger into illegally flipping Georgia’s electoral votes in the president’s favor drew fierce condemnation from Democratic lawmakers, but little in the way of actual punishment. More than 100 lawmakers signed onto Rep. Hank Johnson (D-Ga.) resolution to censure the president, while Rep. Alexandria Ocasio-Cortez (D-N.Y.) called it an “impeachable offense” but alluded to little interest among her colleagues in turning impeachment articles around quickly. When asked about whether Trump should be impeached over the call, Rep. Hakeem Jeffries (D-N.Y.), the chair of the House Democratic caucus, told reporters “We’re not looking backward, we’re looking forward to the inauguration of Joe Biden on January 20th.”

Many Republican lawmakers remain committed to overturning the results of the November election. But a few GOP senators critical of Trump’s attempts have condemned the president’s efforts to stoke his supporters to enact the violence they enacted at the Capitol on Wednesday. Sen. Richard Burr (R-N.C.), said in a statement that Trump “bears responsibility for today’s events by promoting the unfounded conspiracy theories that have led to this point.” Sen. Ben Sasse (R-Neb.) said that the violence “was the inevitable and ugly outcome of the President’s addiction to constantly stoking division.” Sen. Mitt Romney (R-Utah), the only Republican senator to vote for Trump’s impeachment last year, was the first to denounce the president. “This is what the president has caused today, this insurrection,” he told New York Times reporter Jonathan Martin.

None, however, have asked Trump to step down. Vermont Gov. Phil Scott is the only high-ranking Republican calling for Trump to leave office immediately. “The fabric of our democracy and the principles of our republic are under attack by the President,” he tweeted. “Enough is enough.”