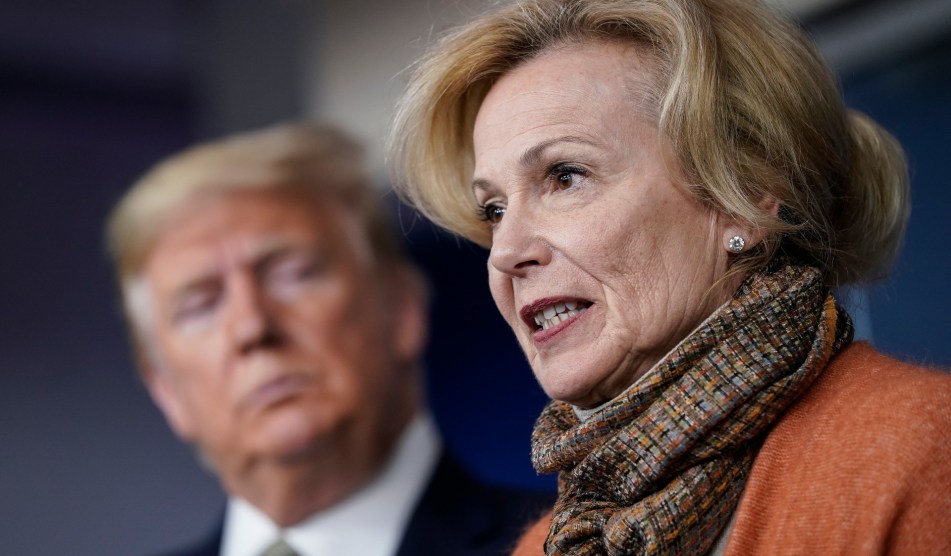 As the pandemic worsened last year, President Donald Trump appeared to be relying on his own stream of unofficial coronavirus data, according to Dr. Deborah Birx, the former White House coronavirus response coordinator. “There was parallel data streams coming into the White House that were not transparently utilized,” Birx said Sunday in an interview with CBS’s “Face the Nation. “I saw the president presenting graphs that I never made. So, I know that someone out there or someone inside was creating a parallel set of data and graphics that were shown to the president.”

Birx, who has announced her imminent retirement from the federal government, said she did not know who was organizing Trump’s data side channel, “but I know what I sent up, and I know that what was in his hands was different than that.” She also mentioned that Trump’s controversial COVID adviser Dr. Scott Atlas “brought in parallel data streams.”

Dr. Deborah Birx on #Covid19 #disinformation inside the #Trump White House: “I saw the president presenting graphs that I never made” she tells @margbrennan

Birx’s revelation is further confirmation from the inside of what was long obvious from the outside: Trump’s coronavirus strategy—which included downplaying risk, pushing unproven treatments, and making false promises—was not based on science or the advice of his own team of the public health experts.

To date, more than 24 million people have contracted coronavirus in the United States and more than 400,000 have died from COVID-19. Experts recently told Mother Jones that if Trump had listened to public health officials and taken steps like enacting mask mandates and boosting the production of personal protective equipment, as President Biden has pledged to do, “we could have dramatically reduced the loss of life.”

Birx was frequently criticized for not publicly challenging Trump’s unscientific rhetoric (like the time he suggested injecting disinfectant), and after she warned of a dangerous “new phase” of the pandemic last August, he tweeted that her comments were “pathetic.” Yet Birx told CBS’s Margaret Brennan that she had worked behind the scenes to make the situation the “least terrible it could be” and to minimize the damage being done by the president. She said her colleagues were part of the effort: “There was a coalition of four of us at the beginning, from [FDA head] Steve Hahn to [CDC head] Bob Redfield to myself to Tony Fauci, making it clear that we would make sure that we could get the information out to the public in one way or the other.”

Birx said that Vice President Mike Pence, who headed the White House’s coronavirus task force, was aware of that she was contradicting Trump’s public statements when she communicated with directly with state governors. Brennan clarified, “[Pence] knew that you were telling the governors privately to do things that the president publicly was making light of. When he was saying, ‘You don’t really need to wear a mask,’ or pushing to reopen the economy faster than your guidelines would allow? Mike Pence knew that?”

“He knew what I was doing,” Birx said.

Birx on messaging #maskup in the face of a defiant president with the private support of @Mike_Pence @margbrennan: Why is that a covert operation?

Birx: "Because if this isn't working and you're not going to get that to work, you have to find another solution" pic.twitter.com/hCOEuUyUHL

When asked what her biggest mistake was in helping leading Trump administration’s coronavirus response, Birx said she could have been “more outspoken,” especially on the issue of coronavirus testing. “I didn’t know all the consequences of all these issues,” she said.