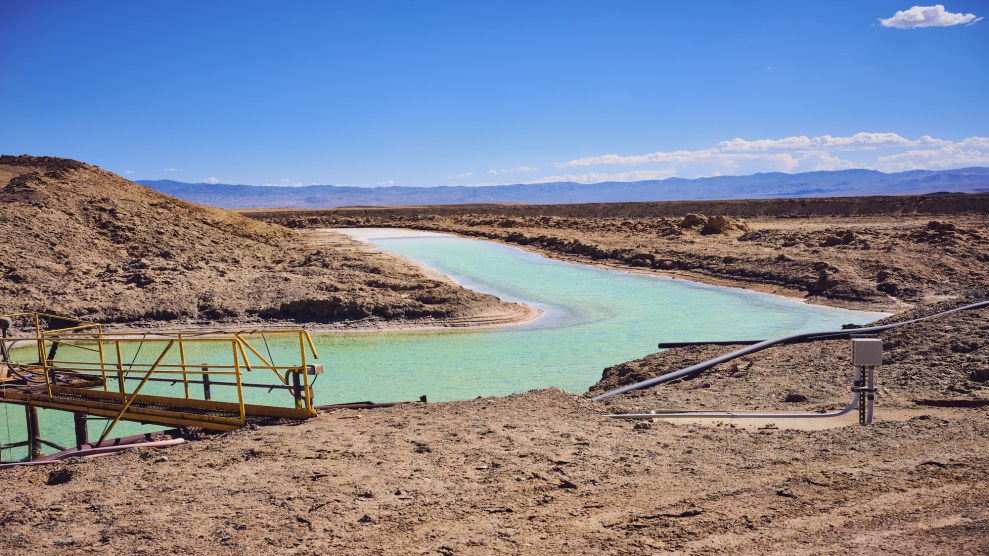 But on the same day, in the Senate confirmation hearing for Energy Secretary nominee Jennifer Granholm, a more complex side of the clean energy revolution was under discussion: mining. Granholm repeatedly said that she supports ramping up U.S. mining to help meet the demand for raw materials required to make the batteries that power electric vehicles and store renewable electricity.

“We are missing a massive opportunity for our own security, but also for a market for our trading partners who may want to have access to minerals that are produced in a responsible way,” Granholm, the former Michigan governor, told the Senate Committee on Energy and Natural Resources. “We know we can mine in a responsible way.”

At one point, Sen. John Barrasso (R-Wyo.) pressed Granholm for a commitment that she would follow the law passed in December to set up a $75 million strategic uranium reserve, which would boost domestic mining of uranium.

“I will certainly act upon the instructions of Congress,” Granholm said.

But the bigger question, which the Republicans who asked about mining ignored, is how and to what extent the Department of Energy might go about encouraging the mining of materials needed for green technology. Minerals such as cobalt, nickel, lithium and rare earths are scarcely mined in the U.S. now, and the protections for the workers and communities where they’re produced are weak.

Cobalt production fell 52% from 2015 to 2019 as imports for consumption increased, U.S. Geological Survey data show. Production of nickel—a metal that makes up 65% of some electric car batteries—was roughly halved. Lithium, a main component in the lithium-ion batteries that now dominate the market, is virtually all imported.

The majority of the world’s available cobalt is sourced from the Democratic Republic of Congo, where labor abuses are rampant and sparsely regulated pollution is now causing birth defects in children. In Indonesia, the world’s largest producer of nickel, companies working on battery parts proposed dumping toxic waste from processing facilities into waters where the planet’s most biodiverse coral reefs are located. Lithium produced in Chile sucks up vast sums of water in the country’s desert regions, while China’s processing of Australia’s hard-rock version is a major source of toxic pollution.

Yet it’s China’s near-monopoly on rare-earths production—controlling roughly 80% of a global supply chain needed for everything from car batteries to iPhones—that has animated much of the chatter on Capitol Hill.

Then-President Donald Trump signed a series of executive orders to boost domestic production of minerals and rare earths, including one in October declaring the need for U.S.-mined rare-earth elements a national emergency. He also signed agreements with Australia and Canada to cooperate on mining. In November, the Department of Defense announced a new deal to turn California’s Mountain Pass mine—the only rare-earths site in North America—into a flagship of the United States’ new “domestic industrial base.”

While the fact that the overwhelming majority of the mining industry’s campaign contributions go to GOP candidates almost certainly played some part in making domestic mining a key Republican concern, the U.S. push to create entire clean-energy supply chains within its borders is part of a global shift. Between the U.S.-China trade war that started in 2018 and the disruptions caused by the coronavirus pandemic, policymakers in North America, the European Union and China all seem eager to boost their own mining industries.

“We don’t want to be under the thumb of China or other countries.”

“There’s this trend globally of states and firms seeing EV [electric vehicle] and battery supply chains through the lens of dominance and security, and arguing that they need to, as much as possible, onshore everything from critical materials to manufacturing to end-of-life recycling,” said Thea Riofrancos, a researcher on clean-energy supply chains and political scientist at Providence College. “The U.S. is part of this geopolitical dynamic.”

Granholm said as much during her confirmation hearing.

“We don’t want to be under the thumb of China or other countries that may have in it their geopolitical strategic interest to corner the market for minerals,” Granholm said.

She added, “I think these minerals can be mined in a responsible way, in a way that respects the environment.”

That would be news to many environmentalists and community advocates in the places where companies have sought to start new mining.

In California’s Panamint Valley, on the edge of Death Valley National Park, the nonprofit Center for Biological Diversity said an Australian company’s exploratory drilling of lithium wells raised a “tricky question” of where the harms of mining hit.

“We shouldn’t export the sacrifices to Bolivia and Argentina,” Lisa Belenky, a senior attorney at the center, told the Los Angeles Times. “We also think that Panamint Valley is not the right place for it.”

In a letter to congressional leaders, dozens of environmental groups and academics condemned provisions to boost mining in last summer’s COVID-19 relief bill, calling it “irresponsible to talk about weakening standards and increasing domestic mining when our national treasures are being divvied up in backroom deals, without public input.”

“The best way to ensure a reliable supply of these critical minerals is to maintain our alliances with nations that source these minerals, while promoting public and private sector investment in research, conservation, recycling, and substitution,” the letter argued. “Ultimately, securing our supply of critical minerals has little to do with domestic mining.”

“This is not a ‘clean transition,’ It’s a transition from one dirty industrial energy source to another.”

This month, less than a week before Trump left office, the Bureau of Land Management approved the nation’s second-ever lithium mine, in an ecologically sensitive stretch of Nevada highlands. Two activists, Max Wilbert and Will Falk, are now camped at the site, hoping to block bulldozers from arriving.

“This is not a ‘clean transition,'” Wilbert wrote in an op-ed for the Sierra Nevada Ally. “It’s a transition from one dirty industrial energy source to another.”

When asked about China on Wednesday, Granholm took a less hawkish tone than other Biden Cabinet picks, including Secretary of State Antony Blinken. But she compared existing U.S. policies for competing with China over clean-energy supply chains to “bringing a knife to a gunfight.”

“Do you see possibilities of us working with countries like China?” Sen. Bernie Sanders (I-Vt.) asked at one point.