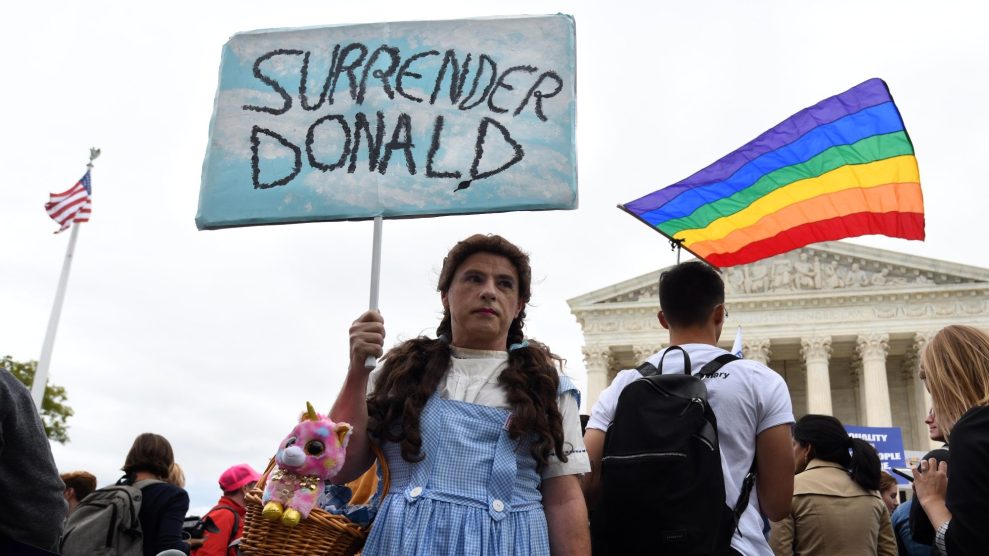 Protesters rally outside the Supreme Court ahead of its October 2019 ruling on LGBTQ workplace protections.(Carol Guzy/Zuma)

In the final hours of the Trump administration—three days before the former president left the White House for his Florida estate—Acting Attorney General John Daukas took a parting shot at transgender Americans. Daukas fired off a memo on Bostock v. Clayton, the landmark 2020 Supreme Court ruling extending federal employment protections to queer and trans people. The Justice Department shouldn’t enforce those rules in sex-segregated institutions like sports and bathrooms, he wrote, and employers who didn’t want to hire queer or trans workers just had to deny them on religious grounds.

The Daukas memo capped the last chapter in the administration’s four-year assault on trans rights. On the day of Trump’s victory in 2016, Trans Lifeline, a trans-run mental health hotline, was flooded with over 600 calls. The LGBTQ advocacy group GLAAD (Gay and Lesbian Alliance Against Defamation) has documented 181 instances of the Trump administration targeting queer and trans people in every sphere of public life—in education, the military, health care, and even for people without shelter.

The stage was set in 2017, when Trump revoked Obama-era guidance to let trans students use their chosen bathroom and barred trans Americans—with a tweetstorm—from the armed forces. It culminated in 2020, when the administration axed protections against anti-trans discrimination in health care and permitted single-sex homeless shelters to ban trans people—even issuing guidance on how to identify trans women by their appearance. Each time the administration announced new anti-trans plans, Trans Lifeline says, calls to the crisis line surged.

Mara Keisling, the executive director of the National Center for Transgender Equality, says that it will be more challenging for future presidents to do what Trump did, but his administration set a disturbing precedent for “letting the extremists run wild.”

“The Trump administration didn’t follow the rules. They didn’t put competent people in jobs. They ignored public comment,” she said. “They just did things illegally, and some other administration doing that might get away with it.”

Many aspects of Trump’s anti-trans legacy will long outlive his orders, tweets, and memos—and advocates say that Biden has a steep hill to climb if he hopes to undo the Trump administration’s lasting, often invisible, harms to the trans community.

In his first week as president, Joe Biden signed a sweeping executive order to reinforce Bostock’s anti-discrimination ruling and effectively rescind the eleventh-hour DOJ memo. Biden also reversed Trump’s ban on trans people serving in the military. New Defense Secretary Lloyd Austin has pledged that trans recruits will be able to serve openly, and that the military will cover all medically necessary transition care. Shannon Minter, the legal director of the National Center for Lesbian Rights, told the Washington Post that the reversal “marks the end of the most serious threat to the legal equality of transgender people in our nation’s history.”

Throughout the Trump administration, advocacy organizations reported spikes in anti-LGBTQ hate crimes. In 2020, at least 44 trans and gender nonconforming people were murdered, the majority of whom were Black and Latinx trans women—making it the deadliest year on record for trans women, according to the Human Rights Campaign.

But rather than expand legal protections, the Trump Departments of Justice and Education pushed through a spate of anti-trans rules and announcements, often under the guise of protecting women, children, and religious freedoms. The consequences for the 1.4 million trans people in the United States have been severe. Sasha Buchert, an attorney with LGBTQ legal advocates Lambda Legal, provided counsel in Karnoski v. Trump, one of several federal lawsuits against Trump’s trans military ban. Buchert says the Trump administration has caused “irreparable harm to trans folks” in ways that are often challenging to quantify. The numbers of trans people who were were deterred or turned away from job opportunities, denied access to health care, or felt they couldn’t file an asylum or employment claim will likely never be known.

For the last four years, Buchert says, Trump officials have been “sending the message to employers and health care providers that they can feel free to discriminate.”

Many of Trump’s anti-trans policies sprang from the religious right, which has long leveraged claims of “religious liberty” to justify anti-LGBTQ crusades—and to block access to abortion and same-sex adoption. Keisling says the Trump administration essentially “handed the keys” of federal civil rights enforcement to right-wing groups like the Heritage Foundation and the Alliance Defending Freedom (ADF)—an SPLC-designated extremist hate group—boosting their power and reach even with Trump out of office. (Noted trans rights opponent Roger Severino, Trump’s civil rights czar at the Department of Health and Human Services, directed Heritage’s DeVos Center for Religion and Civil Society.) Now, expelled from the White House, conservatives are redoubling those attacks at the state level.

In 2019, Heritage and ADF’s prominence in the White House helped them peddle a wave of anti-trans bills to state legislatures. In the final year of his presidency, Trump drummed up support for similar legislation: In May 2020, his Department of Education threatened to withhold federal funding from states like Connecticut, which allowed trans athletes to compete in sports that align with their gender identity. The next month, Trump’s DOJ released a document backing Idaho’s newly passed Fairness in Women’s Sports Act, which banned trans women from competitive sports.

Advocacy organizations like the ACLU and Lambda Legal have threatened to sue if any of the state bills pass. But Keisling and Buchert point to the conservative judiciary Trump appointed—particularly the three Supreme Court seats he filled—as potentially major hurdles. According to Lambda Legal, 40 percent of Trump-appointed circuit court judges have a documented history of anti-LGBTQ hostility.

Most importantly, Buchert says, there needs to be statutory legislation that sets clear protections for trans people under the law, shielding their rights from the whiplash of changing presidential administrations. “I think that executive orders and the back and forth of regulations are unfortunately vulnerable to that kind of seesawing,” she says. That seesaw effect—from Obama to Trump, and now from Trump to Biden—makes it impossible for trans communities to count on the government for health care, economic opportunity, or basic freedom of movement.

Beyond striking down judicial barriers stacked against LGBTQ people, Keisling hopes that the Biden-Harris administration will engage community members to address immediate threats to trans life and liberation, and the pervasive, complex violence against trans people, particularly Black and brown trans women. Though Biden has demonstrated deep support for the LGBTQ community, some are wary of Vice President Kamala Harris’s prosecutorial record and support for SESTA/FOSTA, federal laws that opponents say target trans sex workers for prosecution.

“I would love to see an initiative that really dug into it and tried to create some economic opportunities that try to eliminate some of the criminalization trans women,” Keisling says, “particularly low-income, Black trans women, get caught up in the legal system for like survival crimes, just trying to make a living.”

Above all, Keisling notes, the Biden administration needs to establish trust between trans people and government—and assuage the fears the last administration stoked among trans youth—by surpassing and solidifying the protections Obama laid down.

For many young trans people, says Keisling, “This is the first administration they’ve noticed. They don’t really remember the Obama administration. They saw the president of the United States, the federal government coming after them. That’s got to have a lasting impact.”