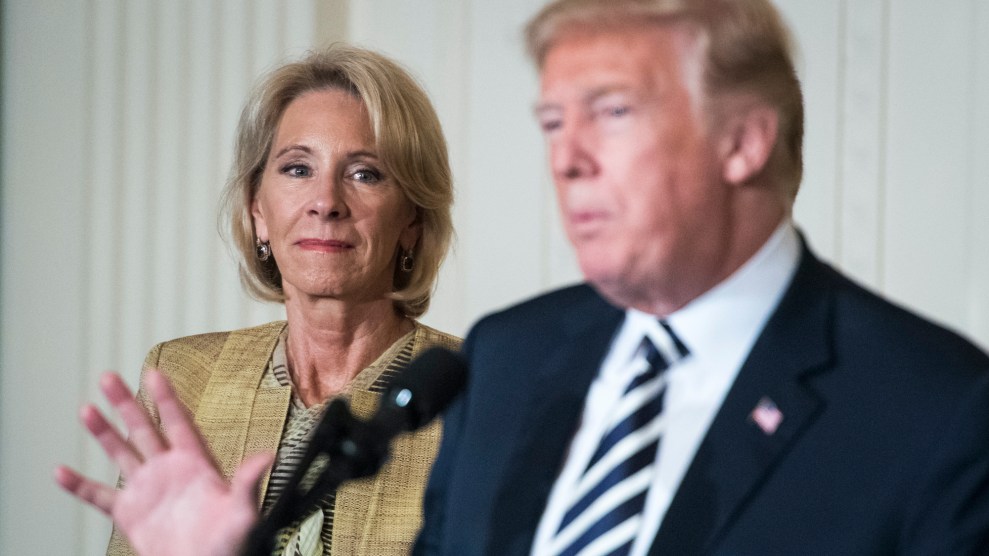 Education Secretary Betsy DeVos resigned from her Cabinet position on Thursday night, writing in a letter to President Donald Trump that the actions of the mob that overran the US Capitol on Wednesday were, in her view, “unconscionable.” “There is no mistaking the impact your rhetoric had on the situation,” DeVos wrote, “and it is the inflection point for me.”

But for some survivor activists who have spent much of the last four years fighting DeVos’ changes to federal rules for how schools must respond to sexual violence, her resignation in the wake of the violence at the Capitol seemed darkly ironic. Newly seated Rep. Cori Bush (D-Missouri), who campaigned openly as a victim of domestic abuse and sexual assault, called DeVos’ resignation “cowardly.”

It’s cowardly to resign in lieu of your moral responsibility to invoke the 25th Amendment.

You're trying to save face, but if you actually cared about stopping violence, you wouldn’t have dismantled Title IX protections for sexual assault survivors.

We won't forget that. https://t.co/xKFPvoEiG0

Survivor activists interviewed by Mother Jones uniformly argued that DeVos should have remained in the Cabinet until President-elect Joe Biden is inaugurated so she could participate in any potential effort to remove Trump from office using the 25th Amendment. (Cabinet secretaries have reportedly discussed invoking the 25th Amendment following Trump’s incitement of the Capitol mob. Such a move would require the cooperation of Vice President Mike Pence, who has said he opposes it.)

“I think, honestly, she’s just being a coward,” says Venkayla Haynes, an Atlanta-based organizer and advocate for survivors of sexual violence. “If she was so against stopping violence, and not wanting violent acts to happen, she should have done that while she was Secretary of Education.” Haynes, whose advocacy focuses on the needs of black and LGBTQ survivors and those with disabilities, pointed not only to DeVos’ changes to federal Title IX regulations on campus sexual violence and harassment, but also to attacks on transgender students’ rights, her cuts to programs for students with disabilities, and her support for guns in classrooms.

“All of these violent things you did during your time as Secretary of Education, and now you want to take a stand against Donald Trump?” Haynes demands. “Someone who has been accused of sexual violence himself, someone who has made racist and ignorant remarks? Now this is the time, 13 days out?”

Sage Carson, manager of Know Your IX, a group that advocates for the rights of student survivors, also accused DeVos of hypocrisy. “It seems laughable in the darkest way that DeVos resigned from the Trump administration because the violence was too much when she has used her role in the Department of Education to continuously commit violence against students, to make schools less safe,” Carson says.

DeVos leaving the administration because the violence was “too much” is laughable considering how much continued violence her Title IX rule forces survivors to experience.

For Wagatwe Wanjuki, a Los Angeles-based antirape activist, DeVos’ resignation prompts a feeling of regret for student survivors who were not helped by their schools as a result of DeVos’ campus sexual assault policy. “Title IX was huge, not just in rolling back protections,” Wanjuki says. “Discouraging survivors from reporting, emboldening universities to betray students. There’s a lot of trauma, moments where we could have intervened, that are now gone. My heart goes out to those students, because it almost feels like a roll of the dice—just because they went to school, or it happened, during her tenure.”

Biden has promised to reverse DeVos’ revamped rules for how schools must respond to sexual harassment and violence, which went into effect in August. But it could take years to rescind and replace the regulations.

“For us, she will always be known as the unqualified United States Secretary of Education, a rapist enabler, and a coward,” says Kenyora Parham, executive director of End Rape on Campus. “We will never forget what she has done.” The National Women’s Law Center‘s Shiwali Patel, who represents survivors and advocacy groups in a pending lawsuit against DeVos, tweeted that the resignation would not change DeVos’ legacy.

It’s a lot too late, Betsy DeVos, to save face from the damage and harm you caused to students as Secretary of Education. You can leave your position 2 weeks early, but we won’t forget the terrible things you did. #ByeBetsy

The feelings of frustration and scorn for DeVos are mixed with some joy. After years of resistance, Parham adds, “we are happy to see her go. If anything, we will now have to continue to clean up the very mess that she has created.” Tarana Burke, the founder of the MeToo movement, celebrated the news as Haynes joined other survivor advocates tweeting “BYE” to DeVos.