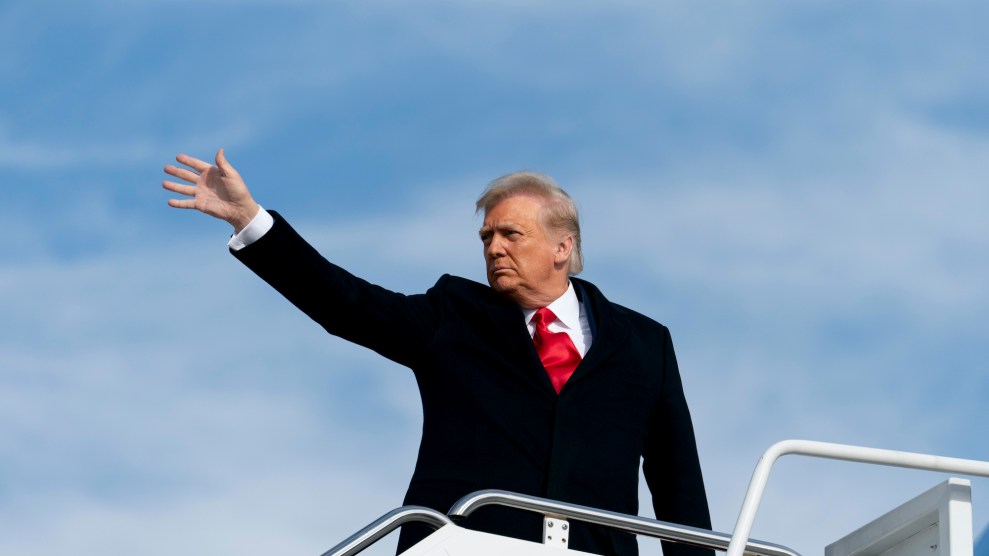 Donald Trump is reportedly considering another run for president in 2024, even contemplating a plan to counter-program Joe Biden’s inauguration with a big campaign rally in Florida. It’s not clear whether Trump—who is still dispensing baseless claims that the election was rigged against him and marred by rampant fraud—is serious about embarking on a presidential campaign or just desperate to remain in the political spotlight. But should Trump make his presidential intentions official—as opposed to merely hinting at them—that would be “profoundly stupid,” in the words of one campaign finance attorney who spoke to Mother Jones. That’s because declaring a presidential bid will trigger a slew of election laws prescribing how Trump can raise and spend money. It would also force Trump to continue filing annual financial disclosures containing information about his business deals, loans, and personal wealth that Trump may not be eager to reveal.

Trump has been submitting those public disclosures since 2015, but he’ll be free of that obligation next month, if he’s no longer a candidate or a president. And the timing couldn’t be better for Trump, especially if he hopes to maintain the perception that he is a wealthy and successful businessman. The last public snapshot of Trump’s finances covered 2019. It showed a business empire that is in decline—with key properties treading water—and that has nearly a half-billion dollars in debt coming due over the next four years and no obvious way to cover these loans. And that was before the pandemic in 2020 caused revenues at Trump’s resorts and golf clubs to plummet.

But if Trump does declare his candidacy next year, he’ll be on the hook for a new filing that will reflect how poorly his business fared in 2020 and reveal what is likely a grim cash situation. He will have to repeat this process every year until through 2024 (if he remains a candidate). That kind of exposure wouldn’t help Trump’s 2024 hopes, since the reports would reveal Trump’s post-presidency wheeling and dealing as he tries to shore up his business. These effort probably will include new overseas deals that could raise corruption and conflict-of-interest concerns.

According to several campaign finance experts, there are other reasons why Trump should wait to announce a presidential run if intends to enter the race. Shortly after the election, he formed Save America PAC, a leadership political action committee that has received the bulk of the $207.5 million he has raised since the election. Leadership PACs are helpful for politicians who are looking to maintain a sort of slush fund that can be used to lay the groundwork for a political campaign by, say, bankrolling travel for appearances in Iowa and New Hampshire, keeping political operatives on the payroll, and making donations to political candidates who can be allies. In other words, a perfect tool for a candidate considering a presidential run.

But there is a hitch. “The only restriction on money in a leadership PAC—it can’t be used to campaign for an office,” says campaign finance attorney Brett Kappel. “You could use it to buy a suit, or pay your legal bills. He could put his kids on the payroll of the leadership PAC. He could put anyone on the payroll of the leadership PAC as long as they’re doing work for the PAC.” Trump could even put himself on the payroll, Kappel adds. But all those perks go away if Trump declares himself an official candidate. So if Trump were to declare himself a candidate, the hundreds of millions he has raised for his Save America PAC cannot be used for any expense directly related to his 2024 presidential campaign. If he wants to open a presidential campaign office, if he wants to hold rallies as a presidential candidate, if he wants to buy ads for his bid to retake the White House—none of that can be funded by this money.

Not only is it easier to spend money with a leadership PAC, there are fewer fundraising restrictions, says Paul S. Ryan, a campaign finance attorney and vice president of policy and litigation at watchdog group Common Cause. “Candidates need to be raising the money under a much lower contribution limit—$2,800 per election, per donor, for the 2024 primary, versus the Save America PAC which can raise $5,000 per calendar year per donor,” Ryan says.

So why would Trump forgo that money and flexibility? “It’s not clear whether he understands this,” Ryan says. “It’s hard to imagine he would have gone through that trouble of raising money into this new slush fund if he understood that launching a 2024 campaign meant it would be off limits to him.”

For decades, candidates have worked industriously to avoid triggering the launch of a presidential campaign before they’re fully ready. Ryan cites Ronald Reagan, who after an unsuccessful presidential bid in 1976, converted his presidential campaign committee into a PAC to support a variety of candidates and spent four years drumming up support and denying he was running for office. Early in the 2016 campaign, shortly before Trump got into the race, Jeb Bush, Scott Walker, and Rand Paul each barnstormed across early voting states with the assistance of super-PACs or leadership PACs, paving the way for their campaigns for months while coyly (or not so coyly) denying they were actually running.

Trump, you might have noticed, is not great at being coy, and it wouldn’t take much to make his candidacy official in the eyes of the law. Ryan explains that Federal Election Commission rules dictate that if you raise or spend more than $5,000 as part of an effort to obtain an office, and you declare your intention to run, that makes you a candidate. At that point, you have to file papers for your campaign and begin complying with requirements—such as filing personal financial disclosures—and lose access to fundraising vehicles like your leadership PAC.

“It would be profoundly stupid for him to do that,” Kappel says of Trump entering the race prematurely. He speculated that Trump has probably been advised as much. Then again, Trump has not necessarily been known to heed his advisers. As Kappel notes, “He probably also got advice to not obstruct justice.”