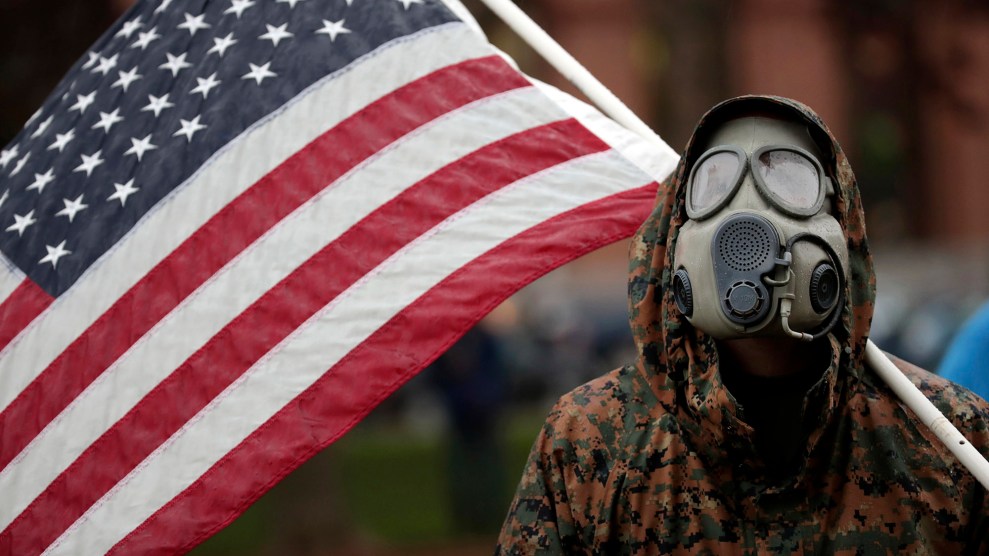 A person in a gas mask protests Gov. Gretchen Whitmer’s pandemic policies at the Michigan State Capitol in May 2020Paul Sancya/AP

In the waning days of his presidency, Donald Trump is engaged in a deliberate campaign of terrorism aimed at Americans who oppose him politically. That description of his actions is neither a metaphor nor hyperbole—it is the assessment of veteran national security experts, whose view of the political violence being stoked by the outgoing president is echoed by law enforcement and political leaders. As Trump has pushed a litany of lies and conspiracy theories claiming that the 2020 election was “stolen” from him through “massive fraud,” he has stirred his most extreme supporters to menace public officials, election workers, and his Democratic and Republican critics alike. Over the past four years, numerous perpetrators of threats and violence have directly invoked the president and his rhetoric, and recent gatherings by far-right groups in support of Trump’s efforts to reverse his election defeat have led to beatings, stabbings and a shooting.

Trump is using a tactic known as “stochastic terrorism,” says Juliette Kayyem, a national security expert and former assistant secretary at the Department of Homeland Security. It’s a method of political incitement that provokes random acts of extremist violence, in which the instigator uses rhetoric ambiguous enough to give himself and his allies plausible deniability for any resulting bloodshed. Violent threats or attacks linked to the rhetoric usually generate muted denials and equivocal denunciations, or claims to have been “joking,” as Trump and those speaking on his behalf have routinely hidden behind.

Previously discussed in obscurity among counterterrorism specialists and national security wonks, the concept of stochastic terrorism first drew wider attention in 2018 when Kayyem cited it in reference to Cesar Sayoc, a fervent Trump supporter who sent mail bombs to CNN and nearly a dozen Democratic figures, including Barack Obama, Joe Biden, and Kamala Harris. Since then—and particularly since Trump’s defeat in November—the president’s willingness to encourage violence for political purposes has become only more evident, according to Kayyem. She says Trump’s behavior should be called out for what it is: “He is promoting terrorism.”

Among national security experts, Kayyem is not alone in this view. “It really matters that the president of the United States is an arsonist of radicalization,” said Kori Schake, who served in leadership posts at the National Security Council and State Department under President George W. Bush. “It will really help when that’s no longer the case,” she added, speaking in a recent online panel discussion about the danger fueled by Trump and his enablers.

“We are stuck parsing Trump’s words…Meanwhile his supporters know EXACTLY what he means.”

Elizabeth Neumann, who until early 2020 served as a DHS assistant secretary focused on counterterrorism and threat prevention, asserted in a Washington Post op-ed before the election that the president has been fomenting violence. “Language from campaign materials and Trump’s extemporaneous speeches at rallies have been used as justification for acts of violence,” she wrote, emphasizing that Trump “has repeatedly been confronted with this fact.” His “inconsistent and muddied” denouncements of violence and white supremacists, she said, only exacerbated the problem: “Extremists thrive on this mixed messaging, interpreting it as coded support.”

Trump has long pursued a campaign of incitement with impunity, unchallenged by Republican leaders in Congress and met with tepid press coverage. “Until recently mainstream media were unwilling to say explicitly that Trump was lying,” Kayyem notes. “In the same way, there is a reluctance to identify the kind of violence that Trump is propagating, maybe because it seems too close to calling him a terrorist. You can call him whatever you want, but the tactics he’s using are clearly a form of terrorism.”

Trump’s nods and winks to far-right extremists began with his 2016 campaign and came to a head in August 2017 when he suggested that the torch-wielding white supremacists who marched in Charlottesville, Virginia, included some “very fine people.” His demagoguery as president was initially focused on “the other,” whether it was his attempt to ban Muslims from entering the United States or his incendiary rhetoric about Mexican “rapists,” migrant caravans, and “shithole” countries. He also attacked the news media as “the enemy of the people,” sparking violent threats and plots against journalists. “What’s happened now is that he has clearly turned it against Americans,” Kayyem says. “He knows exactly what he’s doing. He is focused on American political leadership that is not behind him.”

The danger escalated in the spring when Trump urged supporters to “LIBERATE MICHIGAN!” in response to public health restrictions ordered by the state’s Democratic governor, Gretchen Whitmer, for battling the coronavirus pandemic. Trump targeted the governors of Virginia and Minnesota with the same message and sided with armed protesters in Michigan while tweeting criticism of Whitmer: “These are very good people, but they are angry. They want their lives back again, safely!” By early October, the FBI and state authorities announced they had arrested 13 people plotting violent attacks in Michigan and elsewhere, including plans to storm the Capitol and kidnap and execute Whitmer. Far-right extremists also allegedly targeted Gov. Ralph Northam of Virginia, whom Trump had blasted as “crazy” for his pandemic policies and for supposedly planning to take away Virginians’ guns. When pressed in a fall presidential debate to denounce the violent far-right group known as the Proud Boys, Trump infamously responded that they should “stand back and stand by.”

Trump’s post-election incitement has manifested in new and alarming ways. By early December, after the president unleashed a wave of false claims attacking the election results in battleground states including Michigan, a group of armed Trump supporters gathered outside the home of Michigan Secretary of State Jocelyn Benson as she and her young son were putting up Christmas decorations. They chanted “Stop the steal” and shouted “You’re a felon and must turn yourself in immediately.” Less prominent officials and election workers around the country have been harassed for doing their jobs processing votes, menaced with nooses and death threats, and stalked online or at their homes. On December 14, state electors faced with “credible threats” in Michigan and Arizona were compelled to take extraordinary security measures—including locking down buildings and meeting at an undisclosed location—as they convened to certify Biden’s presidential victory.

Kayyem reiterated in a series of tweets how Trump had perfected the technique of provoking random but predictable violence. “We are stuck parsing Trump’s words, forced into textualist debates about what he meant by ‘Liberate Michigan’ or ‘Stand Back and Stand By,'” she wrote. “Meanwhile his supporters know EXACTLY what he means.”

“The level of concern is about as high as I’ve ever seen it,” a senior federal law enforcement official told me in early December. “Threatening activity based in this kind of rhetoric or anger is always there, but that said, it has been a very active year and it’s kept us and our [state and local] counterparts very busy.” The official, who spoke on condition of anonymity, declined to offer any specific assessment of the president’s role in provoking violence, but acknowledged in broader terms that the post-election conspiracy mongering led by Trump “is undoubtedly big fuel on the fire.”

“This is a really dangerous and cynical attempt to whip up a base for what comes next.”

The president’s tactics have been imitated by his operatives and political allies. Recent comments from Trump campaign lawyer Joseph DiGenova were a textbook example: After the president fired DHS cybersecurity director Chris Krebs, who had described the 2020 elections as the most secure in history, DiGenova said in an interview that Krebs should be “taken out at dawn and shot.” DiGenova later claimed his comments “were sarcastic and made in jest.” As electors in Arizona prepared to certify Biden’s win, state Sen.-elect Wendy Rogers, a backer of Trump’s false claims about the election, tweeted: “Buy more ammo.” When Arizona Democrats criticized Rogers for using incendiary language on such a consequential day, she tweeted repeatedly that she was simply cheerleading for Second Amendment rights. “She knows exactly what she’s doing & wants plausible deniability,” responded Rep. Jennifer Longdon, an assistant Democratic leader in the Arizona House. Longdon’s tweet described Rogers’ own as a “clarion call to lone wolf extremists.”

Longdon, a gun violence survivor, knows well the danger of fringe actors who go on the attack over a political cause, including those who threatened, stalked, and assaulted her over her work on gun safety. Trump’s allies, she says, “have ramped this up to a level that’s beyond irresponsible.” If violence follows, Rogers and others “will just shrug their shoulders and walk away from it. But someone is hearing that call, and that call is coming from someone they consider to be a responsible voice of leadership.” Longdon added that the targeting of conservative Republican state officeholders who deemed Arizona’s election results fair and credible was telling. “This is a really dangerous and cynical attempt to whip up a base for what comes next,” she says. “At what point does this become sedition?”

Both Kayyem and the federal law enforcement official I spoke with suggested that recent commentary about the possibility of a brewing “civil war” has been overblown. They said that fringe elements who would act violently remain small in number. Kayyem also sees the coming change at the White House as pivotal. “We’ve gotten pretty immune to the sort of everyday racism of the current president and how he has nurtured it from the top,” she says. “But I think Biden will be able in his way to shame that, and a lot of it will start to go away. There will still be a threat of violence, but it’s not existential. I think we’ll see that when nonracists control the levers of law enforcement and communications, that these fringe groups will find themselves adrift and more isolated again.”