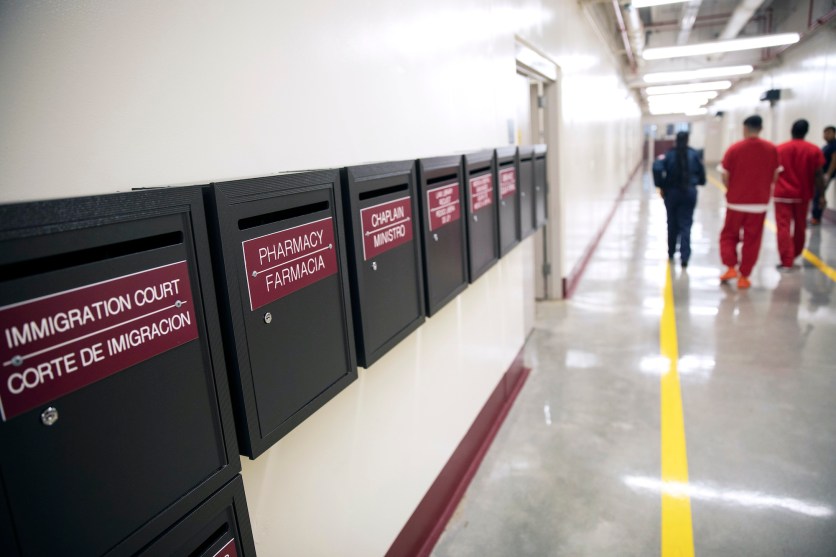 This month, the Executive Office for Immigration Review (EOIR), a Department of Justice division that oversees immigration courts and judges, issued its latest update to its previous report, “Myths vs Facts About Immigration Proceedings.” The 10-page document attempts to debunk what they describe as 29 myths about asylum claims, legal representation, video hearings, and the performance and decisions by immigration judges. What it appears to have accomplished instead, according to immigration lawyers and advocates, is to further underscore the reality of how politicized and flawed the immigration system is—and has been throughout the Trump administration.

Last week the @DOJ_EOIR quietly updated its list of "Myths vs. Fact." I haven't factchecked the new one, but it's much longer and at first glance appears to even more misleading than the previous one. https://t.co/uDwIFsQuuf

As Hoppock notes, the factsheet itself is not entirely new: It expands on a previous iteration of the document from May 2019 that presented 18 statements about immigration as “myths” and then provided their corresponding “facts.” According to EOIR, for instance, the perception that a wide discrepancy exists among different courts in the rates of granting asylum is a myth, and 52 out of 69 courts have a grant rate of 19 percent or lower. Yet, the disparities are well-documented and have been compiled in data from the office itself.

Practicing lawyers, advocates, and even retired judges have challenged many of the supposed misconceptions, sometimes pointing to a disconnect between myth and fact, or the failure to capture the whole picture. When the list was first released, the Washington Post fact-checked four of the 18 claims concluding that, in some cases, EOIR officials were cherry-picking data, used questionable information to dispute common claims, and told only part of the story. Aaron Reichlin-Melnick, a policy counsel at the non-partisan American Immigration Council. characterized some of the “myths” as straw men and the “facts” as opinions.

With this new and expanded version, EOIR continues to argue that immigration judges are unbiased and impartial adjudicators not “swayed by partisan interests or public clamor.” It also still claims that the DOJ’s Legal Orientation Program (LOP), which provides basic legal information to detained immigrants, costs taxpayers money and results in longer stays in detention.

“If people know and assert their rights, the court may need to hold more hearings—which will make the case take longer. If they give up, not knowing how to defend themselves, it will go faster,” Michael Kagan, a law professor and director of the immigration clinic at the University of Nevada, Las Vegas, says. “This statement suggests that EOIR thinks its job is to help DHS deport people faster, rather than to make sure that people in detention know their rights and get a fair hearing.”

Kagan also noted ways in which EOIR is “basically lying with statistics.” To oppose the “myth” that immigration judges have seldom approved asylum cases in recent years, it argued that between 2017 and 2020, judges granted 57,000 applications—an average of more than 14,000 grants per year and the highest four-year total in the office’s history. But, according to Kagan, the reasoning ignores the significant increase in denials, plus the aggregate data only reflects a higher number of decisions made, not a higher grant rate.

“They’re saying, you can trust us to decide incredibly high stakes cases fairly and yet, they’re engaging in rhetoric, distortion, and cherry picking of data as if they’re a politician running for office,” he says. “And maybe we shouldn’t trust them with people’s lives.”

Others have already started pointing out the statistical and logical fallacies in they document from @DOJ_EOIR. It is a corrosion of government for what should be a neutral, expert agency to put out rhetorical documents in guise of reliable information. https://t.co/gX0pY1tjQK

In July of this year, Hoppock described the 2019 list as the “most politically slanted and repeatedly false publication by the agency to date.” He and other critics are now saying the updated document is even worse, describing it as more “explicitly propagandistic,” misleading, and filled with disingenuous or misconstrued arguments and “statistical and logical fallacies.”

In a May 2019 letter to James McHenry, the director of EOIR, former immigration judges and members of the Board of Immigration Appeals said the previous memo presented “imagined myths” and “wildly inaccurate and misleading information” as facts, equating it to “political pandering, at the expense of public faith in the immigration courts” and propaganda. The letter further criticized the list for implying that asylum seekers are deceitful and have invalid claims, and that legal representation makes no difference in the outcome of cases. “Such statements indicate a bias which is absolutely unacceptable and, frankly, shocking,” the letter stated.

“Such statements indicate a bias which is absolutely unacceptable and, frankly, shocking.”

In a statement debunking several of the myths that EOIR claimed it had debunked, the National Association of Immigration Judges (NAIJ) offered its own criticism. (The Federal Labor Relations Authority recently moved to decertify the organization, which was founded in 1971, on the grounds that immigration judges are management officials and, therefore, not granted union representation.) The NAIJ found at least eight key assertions made in the previous DOJ document that either mischaracterized or misrepresented facts. One of the discredited myths that still appears on the updated document states that most asylum seekers with representation are granted protection, an assertion the NAIJ said misses the point: numerous studies have shown that asylum seekers who have access to legal counsel have better chances at winning their cases than those who don’t.

“I would not use the term ‘fact sheet’ to describe this document,” Ashley Tabaddor, president of NAIJ, said in a statement at the time. During a January congressional hearing on the state of judicial independence and due process in immigration courts, Tabaddor referred to the “Myths and Facts” memo again, saying that “issuing blatantly one-sided political talking points” harmed the public perception of judges. “Why are taxpayer’s dollars being spent on such campaign-like tasks?” she asked. “Perhaps most importantly, how can such statements be squared with the primary duty of any court to remain impartial?”

Some of the assertions in the December document are apparent attempts to justify or respond to recent criticism that the independence of immigration courts has been further compromised by the Trump administration’s practice of hiring judges who have backgrounds in law enforcement and promoting others with extremely high asylum denial rates to the Board of Immigration Appeals. “There is nothing unusual or inappropriate about the elevation of a trial-level judge to an appellate judge position,” the document notes, emphasizing that referring to judges’ past employment to predict their “views on particular issues is both misguided and likely inaccurate.” It also rebuts reports about documented inaccuracies in the data on asylum and other types of cases released by the office. Further, it disputes that video hearings are unreliable and violate due process, even though an internal study found that judges had a hard time assessing body language cues and recommended limited use of the technology.

Reichlin-Melnick tweeted that the new “Myths and Facts” sheet appearing at the end of the Trump administration is “a stunning admission of the agency’s failures.” He suggested that it makes an even stronger case for the need for an independent court system free from interference from the executive branch.

“It’s unclear why EOIR is releasing this in the last week of the year, but it may be to defend themselves against well-earned criticism of their midnight policy changes before the Biden administration takes over,” he wrote in an email. “In the waning days of the Trump administration EOIR has abandoned all pretense of independence from ICE and worked tirelessly to transform the courts into an assembly line for deportation. This document, which debunks a series of straw men and contains multiple falsehoods, seems designed to justify some of these draconian changes.”