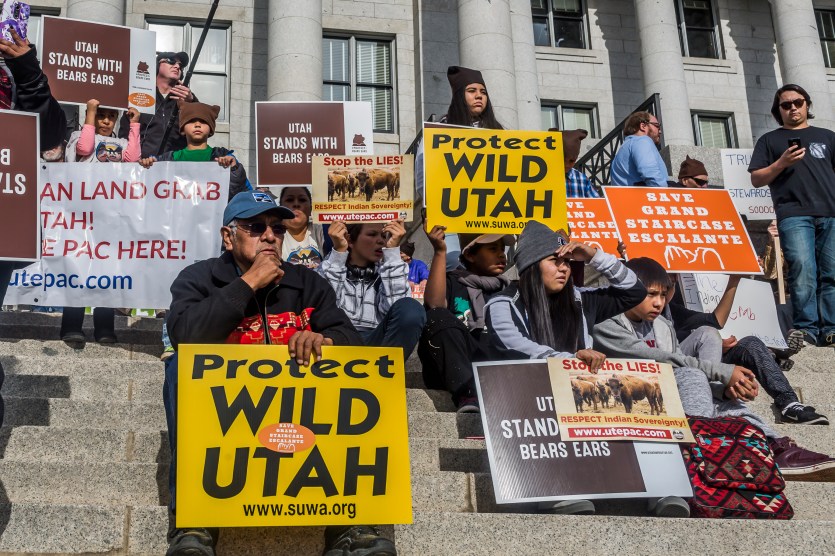 This story was originally published by High Country News

Over the span of his administration, many leadership positions in the Bureau of Indian Affairs and the Interior Department were left empty or filled by appointees never vetted by Congress. The annual White House Tribal Nations Conference, held by President Barack Obama for eight years, ceased. Trump’s three Supreme Court justices include one with a solid understanding of federal Indian law and the U.S government’s responsibility to tribes, as well as one whose judicial perspectives are actively harmful.

In the first year of his administration, Trump made his priorities clear with a series of memos and executive orders repealing protections for land and wildlife. His “America First” energy plan expedited controversial projects like the Dakota Access and Keystone XL pipelines, which faced monumental, sustained opposition by Native nations and their allies. He reduced the newly established Bears Ears National Monument by 85%, a monument whose creation had been Indigenous-led and centered. “Trump took the position against Native people first thing in office,” said Matt Campbell, staff attorney at the Native American Rights Fund and enrolled member of the Native Village of Gambell. “So, I think that set the tone early on for the relationship.”

“The total onslaught of federal rule rollbacks under environmental laws was like nothing we’ve ever seen. It was dizzying.”

Trump’s policy directives also reduced environmental protections. Federal laws like the National Environmental Policy Act, Clean Water Act and Endangered Species Act enable tribes to give input on large-scale projects on their ancestral lands. Under Trump, these were weakened. “The total onslaught of federal rule rollbacks under environmental laws was like nothing we’ve ever seen. It was dizzying,” said Gussie Lord (Oneida Nation of Wisconsin), managing attorney of tribal partnerships at Earthjustice. “It resulted in not only a weakening of substantive environmental protection, but was also a real attack on public participation and access to information.”

And then, the pandemic: As Senate aides told the Huffington Post, tribal nations were not initially included in the first COVID-19 relief package. Even when $10 billion was allocated to tribal nations, distribution was held up for months, withholding critical aid for personal protective equipment, financial aid and testing. “This administration’s record is one of repeated failures for Native communities,” said Sen. Tom Udall, vice chairman of the Senate Committee on Indian Affairs, in a statement. “The truth is the White House is actively undermining Tribal sovereignty across the country and mishandling a once-in-a-century pandemic that is disproportionately hurting Native communities.”

The ramifications are still being felt in the current wave of COVID-19 infections and deaths. Nationwide, thousands are dying daily. The Navajo Nation, which saw a devastating rise in COVID cases and deaths in the summer, has begun to see the numbers go up again, according to reporting by the Navajo Times. Meanwhile, the CARES Act funding deadline of Dec. 30 looms.

Many of the decisions over the last four years will have a lasting impact on Indian Country no matter how quickly the new Biden/Harris administration works to reverse them:

The Trump administration’s actions have not slowed in its final months, as its agencies continue to fast-track politically fraught projects. In November, the U.S. Forest Service decided to repeal protections on the Tongass National Forest that kept new logging, mining and hydroelectric dams to a minimum. None of the Southeastern Alaska Native tribes involved supported such a move, and by the end all 11 had resigned from participating in the Forest Service process.

Meanwhile, the U.S. Fish and Wildlife Service decided to open the Arctic National Wildlife Refuge to oil and gas leasing, despite opposition from Alaska Native tribes and the Gwich’in Steering Committee. In Arizona, the San Carlos Apache Tribe has rejected a U.S. Forest Service land swap that would allow copper mining in an area called Chi’chil Bildagoteel, or Oak Flat, which has important religious and cultural sites. Even though the Forest Service on Dec. 1 moved the final decision date from April 2021 to Dec. 30, the agency said it “does not reflect an acceleration.”

Some of this could be undone by incoming President Joe Biden, or by Congress. Other decisions made by officials in an “acting” capacity could be invalidated. But precious time has already been lost when it comes to addressing the climate crisis, and the lives that were lost in the worst public health crisis in a generation cannot be regained. On Nov. 8, less than a week after Election Day, the National Congress for American Indians held its annual meeting, this year focused on truth and reconciliation and the incoming administration. “We demand a reconciliation back to those basic foundational principles upon which this country was built — principles like justice, like equality, like liberty, like the freedom to just live as our ancestors have lived from when time began,” NCAI President Fawn Sharp (Quinault) said. “Only then can we begin a healing process as a country and as a nation.”