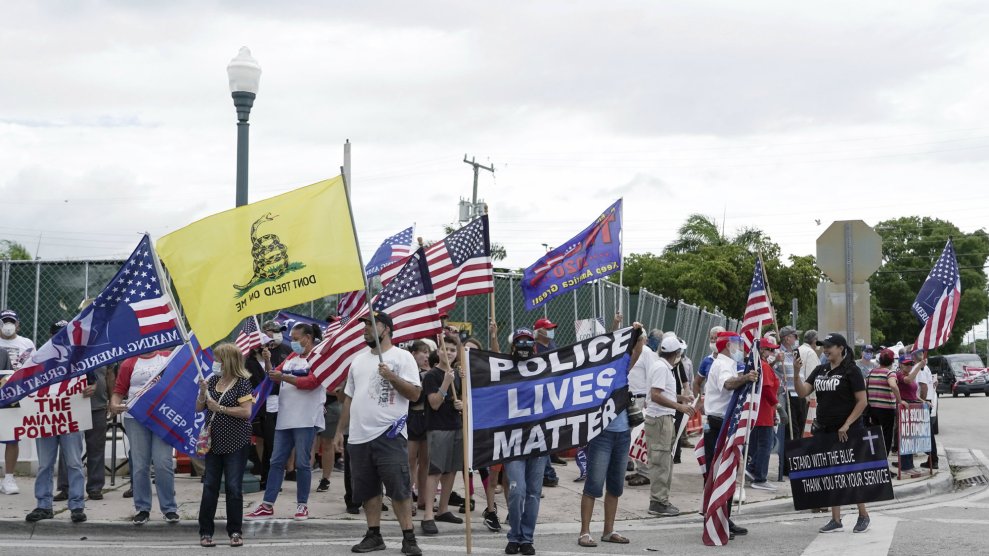 Last weekend, Danny Presti, who owns Mac’s Public House in Staten Island, New York, hit a police officer with his car while evading arrest for having flagrantly violated coronavirus restrictions—specifically the one about serving unmasked customers indoors. A police statement said that they attempted to arrest Presti after observing people inside the bar, but the bar owner got behind the wheel, ran his car into a New York City sheriff’s deputy, and drove 100 yards with that deputy perched on the car like some life-sized hood ornament. Before this encounter, Presti already had become a right-wing hero after publicly defying New York Gov. Andrew Cuomo order that bars and restaurants in areas with a high concentration of infections cease serving customers indoors. Instead he declared his bar an “autonomous zone” and encouraged people to come drink and eat at the establishment.

As Media Matters for America reported, Presti’s opposition to science and to social distancing guidelines (especially those handed down by a Democrat) earned him several days of glowing praise from Sean Hannity, who has made an impressive living by fueling culture wars that keep white conservatives enraged and engaged. A key part of the Hannity’s reliable playbook is defending the police from what he and other conservatives consider threats both to their lives and to their crucial authority in maintaining the social order.

But that changed with this most recent incident of, well, harming a police officer. All of a sudden, Fox News and Hannity doubled down on their support for Presti. As Presti sat looking concerned, Hannity explained that his guest was the real victim in all this. Hannity said that Presti was simply unaware that the people who were approaching him were cops trying to arrest him. He was similarly oblivious to the fact that the person who jumped on the hood of his car was a  law enforcement official. (He could not explain why he continued to drive with someone on the hood of the car.) Hannity also said Presti was getting killed (presumably financially) by restrictions.

Now it was time to talk to his guest. “Do people even understand that your heart, life, and soul is involved in this, sir?” he asked. Presti replied that the reason he “started all this” was to bring attention to the fact that small businesses need assistance. Hannity even compared the bar owner to Eric Garner, a 44-year-old Black man who was killed by a white New York police officer  who put him in a chokehold while trying to arrest him for selling loose, untaxed cigarettes. “It reminds me of…you know what was wrong with the Eric Garner case,” Hannity said. “Why are they arresting a guy over a loosey cigarette to begin with?” (No need to elaborate on what Hannity said about the Eric Garner case when it was unfolding. For that, take a look at Media Matters.)

The Staten Island bar attack, subsequent arrest of Presti, and Hannity’s framing of the two can be seen as a microcosm of the extreme right’s muddled sense of the role of government in American lives.

This might be just business as usual during the polarized and troubling last weeks of the Trump administration, but the Staten Island bar attack, subsequent arrest of Presti, and Hannity’s framing of the two can be seen as a microcosm of the extreme right’s muddled sense of the role of government in American lives. Basically, it appears that for them, the most legitimate role of government in the public sphere is to maintain existing and inequitable racial and social hierarchies. When it suits their purposes, conservatives  heap praise on government officials like the police, in their work to keep that racial order intact. But once anything falls outside of that realm—enforcing public health restrictions during a pandemic, for instance—their cries of tyrannical government overreach soon follow. As this year’s racial justice movement and public health crisis collided, the conservative commentariat had to do some contortions to keep their messaging straight: Anyone defying public health orders is a patriot and anyone questioning the conduct of law enforcement officials is a traitor. Make sense?

The brazen hypocrisy of asserting that police violence is justified because law enforcement is indisputably right, but government orders to wear a mask or restrict indoor crowds is a grave blow to our freedoms is obvious. Let’s look back at when the Black Lives Matter protests really took off this summer after George Floyd was killed by a white police officer in Minneapolis, Minnesota. At that same time many governors and mayors were also trying to get their constituents to wear masks, avoid crowds, and socially distance. Faced with these two competing narratives, conservatives could barely contain themselves. There was so much going on! First liberals—with the help of Antifa, of course—were waging a war on cops. Then, they were trying to curtail our God-given right to congregate at your nearest restaurant and spread disease to beleaguered service workers.

Meanwhile, how dare they demonstrate and create a superspreader event, the hypocrites! “Now that rioters and looters are gathering in large numbers, the media no longer cares about social distancing, because the media sympathizes with them,” William Jacobson, a Cornell University law professor and right-wing pundit told Fox News in June. (Just to be clear, the demonstrations were not superspreader events,  especially compared to, say, a Rose Garden ceremony.)

The racial justice demonstrations and the mask wearing debates and Danny Presti all reveal that the Hannitys of the world, for all their high mindedness and passionate conviction, don’t actually believe in anything. They are the ultimate cynics. All of the indignation from conservative TV hosts, wily elected officials, and even your obnoxious relative who posts crudely designed political memes on Facebook, often turn out to be just empty rhetoric masquerading as principle. At rallies to support the president’s attempt to overturn his election loss, Trump supporters flew Christopher Gadsden’s Don’t Tread On Me flag, but you can also find them waving the Thin Blue Line flag in a show of support for law enforcement. They’re demanding freedom from government intrusion except when that intrusion happens to be law enforcement bearing down on protesters, in which case it’s fine. It’s not fine, however, when law enforcement tells them to follow the law, like wearing a mask. The end result is an incoherent mix of the- government-better-not-try-to-tell-me-what-to-do, but they-better-tell-those- marginalized-people-what-to-do. Don’t tread on me, tread on those other people instead.

In fact, this line of reasoning is not new to the Trump era. Policing and punishing the poor, while fattening the pockets of the wealthy and well-connected is one of the enduring legacies of the presidency of Ronald Reagan. His family, impoverished by the Great Depression, benefited from Franklin D. Roosevelt’s New Deal program, but as president, Reagan slashed the social safety net, filled up military and law enforcement coffers, and lavished tax breaks on the wealthy. He openly scoffed at the notion that government should help people. “The nine most terrifying words in the English language are: I’m from the government, and I’m here to help,” he memorably said during a 1986 speech. (Democratic President Bill Clinton followed suit and was also cautious about the role of government during his years in the White House.)

Today one would be hard pressed to find any conservative who thinks government should be involved in the lives of citizens by actively providing generous support to those in need. So, today, as Congress is stalled in the process of providing meaningful coronavirus relief, with millions unemployed, up to 40 million facing eviction at the end of the year, and 54 million people going hungry, bar owners like Danny Presti don’t see our national crisis as the result of an incompetent and racist government, but rather as direct assault on all their cherished so-called freedoms. He’s all about the Reagan myth of pulling ourselves up by our bootstraps, a myth we’ve been conditioned to accept in lieu of public services.

In a just world, the conservative cohort, who have spent a good part of this hellacious year appointing themselves as backers of law enforcement, responding to chants of Black Lives Matter with “blue lives matter,” flying Thin Blue line flags, and castigating protesters as the real enemy, would have reacted to what Presti did with outrage, framing it as an attack on the protectors of public safety. But clearly they didn’t. And in not doing so, they are communicating something fundamental about their priorities: police lives only matter when it’s convenient for their narrative.

How is Presti, who tried to evade arrest and hit a police officer with his car, a victim of police brutality? It all makes sense once you consider that conservatives don’t support the police as much as they support the unspoken contract that policing is for other people, especially people of color. And one need only imagine what would have happened had Presti been a Black man doing exactly the same thing. Once cops violate that unspoken contract, they become mere government officials who have no right to tread on their liberty. “I have nothing but the utmost respect for the NYPD and law enforcement,” Presti said at a news conference after being released without bail. “I think when the investigation is complete you’re going to find out that I did nothing wrong.”