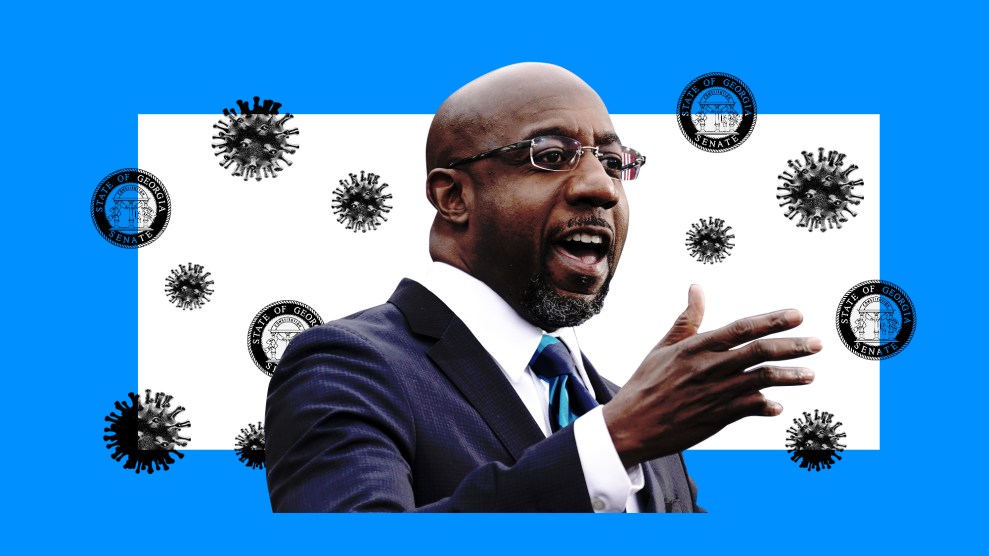 The 26-year-old political organizer is explaining what it has been like this past year in Albany, Georgia. As we speak, it is clear the small city in the state’s southwest has, as they say, been through it. “It was like, I walked by that person, I just talked to that person, and all of a sudden,” she adds, “they’re not here anymore, for this reason that we don’t totally understand.” In early March, spring deluges caused flooding; shortly after, Albany experienced a massive COVID-19 outbreak after a funeral became one of the first super-spreader events in the country, hitting the local Black community particularly hard.

“It was like, I walked by that person, I just talked to that person, and all of a sudden, they’re not here anymore.”

This devastation is providing something of a messy backdrop for two incredibly tight—and incredibly important—runoff elections in just a few weeks, and it’s proving to be both an impediment and a motivator for people who are desperate for change but are also navigating the repercussions of 2020. “We say voting is life or death, and then it became really clear,” Farooqi says. “There are people not here right now, that would be here, if we had leadership that cared.”

I went to Albany this past weekend, joining a stop on the campaign trail for the Reverend Raphael Warnock. To win the tight race against Republican Sen. Kelly Loeffler on January 5—as control of the US Senate hangs in the balance—the Warnock campaign knows it must drum up high levels of support in places like Albany, which is in a county that went overwhelmingly for Biden but is still a far cry from the blue stronghold of Atlanta.

From Friday through Sunday, the campaign made a loop through the state, visiting places you’ve heard of and several you almost certainly haven’t—from Athens, home to the University of Georgia, to a Missionary Baptist church on the outskirts of Augusta, the state’s second-largest and second-oldest city, to smaller places like Warner Robins and Waycross (called that because it’s “waaaaaaaay ‘cross Georgia,” Warnock likes to joke).

Albany sits somewhere in the middle—a small city with a population around 70,000. When I arrived at a hotel near the spot where a Warnock would be later on Saturday, I came across a very large, very unhappy man at the check-in counter. He was white, unmasked, and he was berating the woman behind the counter, who was Black, for some misunderstanding regarding his reservation. He was swearing at her, insisting that his room be located on the first floor, though the type of room he had booked did not exist on the first floor. “What do you mean ‘type’? You mean because I’m white?'” he replied, his voice rising. “No sir,” she said, “I mean your type of room—king, queen, double.” Eventually, he left in a huff, but she never lost her composure or professionalism.

Going from that lobby exchange to the rally across the street felt a little like stepping from one dimension into another. The back parking lot of the civic center, a geometric building in a generic brown brick, quickly became a sea of cars, and it was loud—drivers honking their horns in enthusiasm for Warnock and his message, locals in masks greeting each other by bumping elbows and passing around signs and T-shirts. While the crowd was diverse, it was a mostly Black space, and the joy there was undeniable—that it was coming from a place that has endured such significant pain and heartache made it all the more infectious, even for us outsiders.

“It shocked my conscience when I heard that Albany, Georgia, had become a hot spot for COVID-19,” Warnock told rally goers. “By the way, you all remain vigilant now. Remain distant even as we come together. We’re going to get through this together.”

Warnock’s message was primarily one of hope and unity, and he placed special emphasis on issues like health care and education—driving home that above all, he believes in the possibility of a Georgia that makes the American Dream accessible to all. It’s a message that carries special weight in more rural parts of the South that have traditionally been forgotten, shoved to the bottom of their states to largely fend for themselves and their citizens. So, for Farooqi and others I spoke with, it is meaningful that Warnock is spending time in places like Albany; locals repeatedly made a point to tell me that national Democrats have refused to invest time or energy, let alone money, in their hometown. “It’s comforting to me that they know that Albany is a force and that…if you get southwest Georgia, you will win Georgia,” Farooqi says.

Warnock has in fact been intentional in his outreach to rural voters and Georgians who live outside of Atlanta. As I wrote in a profile of the Democrat in October:

Warnock…is similarly focused on these ideas and building wide appeal on health care—rural health care in particular. Beyond the failed coronavirus response, the campaign has been zeroing in on how the state’s decision not to expand Medicaid has led to a crisis and widespread loss of life, specifically among rural Georgians. Warnock is prone to mention his 2014 arrest at the governor’s office, where he was protesting the decision, as extra credibility: “My running for Senate is an effort to get escorted again by the Capitol Police, this time not to the central booking but to my new office as a US Senate senator, where I can do the work that I’ve been talking about all these years.”

Bobby Fuse, a lauded veteran of the civil rights movement in Georgia and a political consultant, told me that he feels this work has paid off and Warnock has been able to genuinely connect with voters in the rural parts of the state. “Somewhere there’s a myth that [Democrats] can win statewide election with the larger cities and Atlanta and not have to worry about rural Georgia, suburban Georgia,” Fuse, who lives in Americus in southern Georgia, tells me.

“It’s comforting to me that they know that Albany is a force and that…if you get southwest Georgia, you will win Georgia.”

“You’ll notice that Trump, I think he came to Atlanta maybe once in his term as president,” Fuse adds. “Every other time Trump comes to Georgia, he’s come to Rome in North Georgia; Perry, Warner Robbins in middle Georgia; or to Valdosta in south Georgia.” Many of these are spots Warnock has taken care to visit.

Still, Democratic progress wouldn’t be possible without the network of passionate progressives in Albany, and in many similar Southern cities, who are committed to organizing and working toward greater equality. Many are young—like Farooqi, who moved to Georgia from the DC area after Donald Trump won the presidential election to work on Jon Ossoff’s 2017 run for a House special election. She wanted to go where she could make a difference, where there was a need; she’s been in southwest Georgia ever since, and she’s fallen in love with it. “I will ride and die for the rural South for the rest of my life,” she told me, laughing.

To an extent, local organizers say it’s been a nice change to have national attention focused on their state. But it is admittedly chaotic, and often the vast resources flowing in don’t trickle down to the places where Farooqi and her friend, Kiana Jackson, an organizer with Black Voters Matter, actually do their work. “We’ve always known that Georgia is, at its heart, ready for progress, we’re ready to be different,” Jackson tells me. “And the only reason why we haven’t been able to sooner is because of the massive amounts of effort that are being placed to suppress the vote of people of color and of young people…we’re just happy that the nation is starting to see what we’ve seen our entire lives.”

Still, Farooqi says, “if you’re not willing to really roll up your sleeves, and like get on your knees and get down with people and with the community, don’t come—don’t come, parachute in, and leave.” Because her work and Jackson’s work and the work of other rural Georgian organizers does not end after January 5.

In the meantime, Farooqi, Jackson, and others will continue voter education efforts in Albany and surrounding areas, helping voters navigate the runoff process while the pandemic continues to grow. As Warnock noted in his remarks there, “I know there is a lot of darkness in this moment, but the preacher dropped by Albany who just happens to be running for Senate to say hold on because the light shines in the darkness overcometh thee not.”