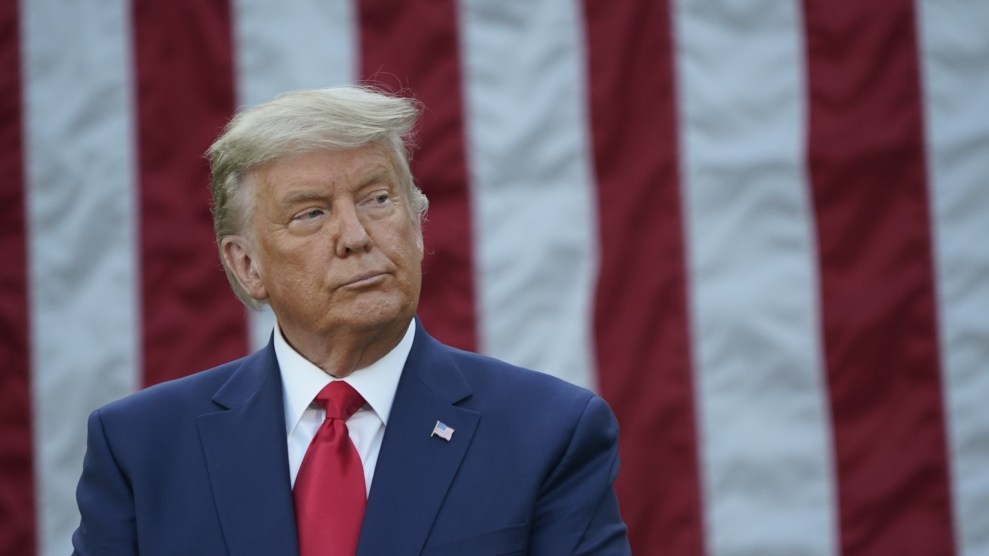 President Donald Trump delivers an update on his administration's COVID-19 response at the White House on November 13, 2020.Chris Kleponis/CNP via ZUMA Wire

The Trump administration’s ongoing refusal to recognize Joe Biden as the election’s legitimate winner and initiate the transition process is endangering the nation’s ability to fight the coronavirus. That was the message delivered Sunday by doctors serving on Biden’s pandemic task force, by Biden’s incoming chief of staff, and even by a Republican governor.

“There is a lot of information that needs to be transmitted,” Atul Gawande, a surgeon and Harvard Medical School professor named to Biden’s team, said on ABC’s This Week. “It can’t wait until the last minute.”

Gawande said that “it is in the national interest” for Biden’s team of experts to have access to the latest coronavirus threat assessments. He added that knowing vaccine distribution plans and the status of mask and gloves supplies would also be crucial for Biden’s planning.

Ron Klain, who was recently named Biden’s White House chief of staff, told NBC’s Chuck Todd that the transition team has had no contact with Anthony Fauci or any of members of the Trump administration’s coronavirus task force.

The key information Biden’s team wants is the status of vaccine distribution plans, Klain added. For now, Biden’s team must rely on the private sector for insights—Klain said Biden is scheduled to meet this week with drug companies such as Pzifer about the status of their vaccine development.

Even Asa Hutchinson, the Republican governor of Arkansas, expressed concerns about the Trump administration’s unwillingness to work with the incoming president. “We want to make sure there is a smooth transition, especially when it comes to the vaccine distribution [and] the coronavirus” so “everybody understands what we’re doing there and what the plan is for the future,” he told Todd.

As his first act as president-elect, Biden appointed an advisory board of doctors and scientists to help him navigate the pandemic, which has reached staggering rates of infection over the last week. Under federal law, the General Services Administration is supposed to provide the president-elect’s transition team—including advisers such as these—with office space, funding to support transition efforts, and, crucially, access to federal agencies and their staff, as well as to daily briefings. The point, of course, is to assure that power is transferred in an orderly manner—something that is even more important during a national health crisis.

But as Trump continues to reject the election’s outcome, GSA administrator Emily Murphy, a Trump appointee, has refused to issue the “letter of ascertainment” that would grant Biden’s transition access to those resources. “We can’t until we get that GSA ascertainment,” Klain said Sunday.

Biden will not take office until January 20, and, as Klain noted, “there’s not much Joe Biden can do right now to change” the nation’s response to the pandemic. But Biden’s medical advisers are recommending measures that scientists have long prescribed, such mask-wearing. Michael Osterholm, an infectious disease expert at the University of Minnesota who was named to Biden’s task force, told Todd that “if we don’t take basic steps like stop swapping air” with people, hospitals will soon reach their breaking point. Biden has called for a nationwide mask mandate.

As the holidays and attendant travel approach, Osterholm called for a nationwide, standardized response on safety measures. Gawande said the advisors are “not in support of a nationwide lockdown” because targeted measures at the local level—including mask-wearing, widespread testing, and capacity restrictions—are sufficient when properly implemented.