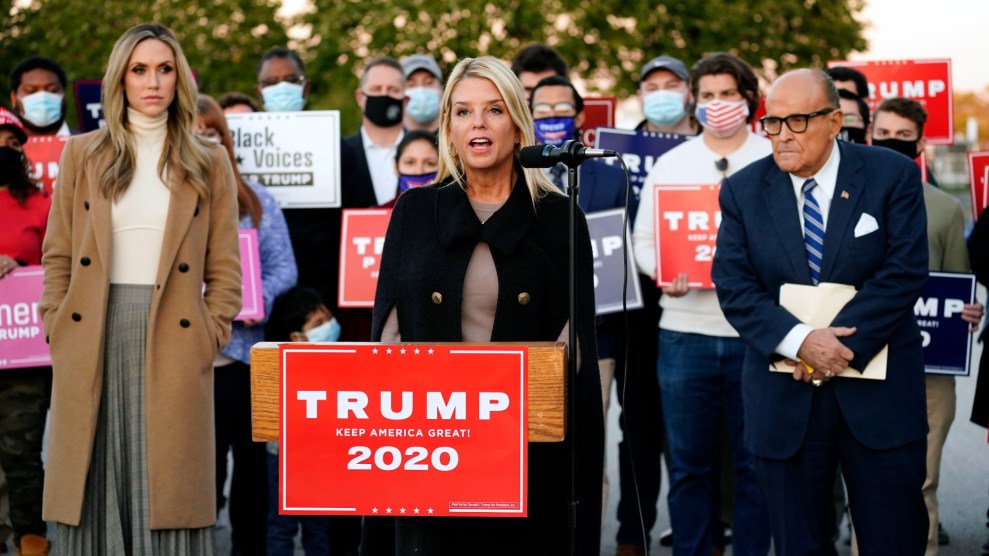 Former Florida Attorney General Pam Bondi, speaks during a news conference on challenging vote counting in Pennsylvania, Wednesday on Nov. 4, 2020, in Philadelphia. At left is Lara Trump, daughter-in-law of President Trump and at right is Rudy Giuliani, a lawyer for President Trump.Matt Slocum/AP

The ragtag legal team that President Donald Trump has dispatched in a long-shot bid to disrupt vote-counting across the country includes several lobbyists who represent domestic and foreign interests. While there’s no reason to think their lobbying efforts are directly related to their work for Trump’s legal team, it’s worth considering the swampy day jobs of the well-heeled lawyers scrambling to disenfranchise their fellow Americans.

Former GOP Rep. John Sweeney, who is assisting the Trump team’s efforts, is registered to lobby for multiple Russian entities. Former Florida Attorney General Pam Bondi, who is involved in the Trump team’s effort to challenge the vote-counting process in Pennsylvania, works for a leading Trump-connected lobbying shop and is a registered foreign agent for Qatar. Corey Lewandowski, the one-time 2016 Trump campaign boss, works for a firm whose lobbyists represent foreign and domestic clients with interests in Washington. Lewandowski has said her personally does not do lobbying work.

And then there’s Rudy Giuliani, the co-head of Trump’s legal assault. Giuliani reportedly faces a federal investigation into whether he violated lobbying laws by failing to register as foreign agent in connection with his activities in Ukraine last year. Giuliani, who is not a registered lobbyist, denies wrongdoing and has suggested that billionaire philanthropist George Soros is behind the probe.

Speaking at a news conference in Philadelphia on Wednesday, Giuliani said that Sweeney, who was on hand for the event, is working with Trump’s lawyers, “going around the country collecting” information on alleged abnormalities in vote counting. It’s not clear exactly what that entails. Giuliani didn’t elaborate, and Sweeney immediately hung up when Mother Jones called him.

But it’s worth noting that Sweeney is registered with the Justice Department as an agent for Vnesheconombank, a Kremlin-controlled investment bank that the United States sanctioned in 2014 as part of the US response to Russia’s invasion of Crimea. (The bank, known as VEB, played a part in the Trump-Russia scandal due to a December 13, 2016, meeting between the bank’s former chairman and Jared Kushner. Special counsel Robert Mueller’s report noted that Kushner and the bank chairman made contradictory claims about the meeting’s purpose.) Sweeney’s DOJ registration states that he was hired to help the bank avoid new sanctions. Sweeney’s contract with the bank pays him about $750,000 per year.

Sweeney is also a registered lobbyist for the Nord Stream 2 pipeline, a project by Russia’s state-run gas giant, Gazprom, to move natural gas from Russia to Germany. Congress has passed legislation aimed at blocking the effort. In addition, Sweeney has represented Igor Kolomoisky, a politically powerful Ukrainian tycoon who previously controlled a Ukrainian bank seized by that country’s government in 2016 due to a lack of capital and financial improprieties. The US Justice Department in August announced that it is seeking to seize US property that Kolomoisky allegedly bought in the United States with money stolen from the bank. Kolomoisky’s lawyers deny the allegations.

Bondi, who has appeared at press conferences in Philadelphia this week to fault local ballot-counting procedures, works for a Ballard Partners, which has become one of Washington’s top lobbying shops by touting its ties to Trump. The firm’s founder, Brian Ballard, is a longtime Florida Republican operative who once worked as a lobbyist for Trump’s business interests in that state. Bondi is registered with the Justice Department as an agent for Qatar’s government. She is also among a slew of Washington operatives who have lobbied for KGL Investment Co., a Kuwaiti company whose CEO—Marsha Lazareva, a Russian citizen—was arrested in 2017 by Kuwaiti officials for allegedly embezzling public funds. Lazera, who is imprisoned, continues to dispute the charges. Bondi also appears to have had a chummy relationship with Lev Parnas, a Giuliani associate and a key figure in Trump’s Ukraine scandal, who is under indictment for fraud and campaign finance violations, and who helped steer foreign lobbying business to Ballard in 2017. Ballard Partners and Bondi did not respond to inquiries Thursday.

Democratic members of the House Judiciary Committee last year accused Lewandowski of selling access to Trump and the White House by offering his services to foreign and domestic clients as a consultant. Lewandowski since 2017 has maintained ties to lobbying firms, while saying that he himself is not a lobbyist. He previously worked for a firm, Avenue Associates, that lobbies for Qatar. Last year, Lewandowski joined a firm, Turnberry Solutions, that is named for a golf course Trump owns in Scotland. Lobbyists for the firm, through a legally separate corporation, have represented a pro-Russian Serbian separatist party in Bosnia.

Giuliani himself has spent nearly two decades doing work for foreign parties. At times he acts as a lawyer, helping clients with legal issues in the United States. At other times, he acts as a consultant, offering security advice to cities and states around the world. Prosecutors in the Southern District of New York, an office Giuliani once ran, are reportedly looking into whether he violated the Foreign Agents Registration Act. The probe has reportedly focused on Giuliani negotiating to be paid hundreds of thousands of dollars to represent Ukraine’s top prosecutor while helping that prosecutor pursue an agenda in Washington that included the firing of the former US ambassador to Ukraine. Giuliani has said he was never actually paid by the prosecutor.

Senate Democrats have also asked the Justice Department to look into whether Giuliani is violating foreign lobbying laws by doing work for foreign interests without registering with the DOJ. This includes Giuliani’s prior paid work for a Ukrainian-Russian oligarch investigated by Mueller; Giuliani’s acceptance of a payment to write a letter attacking an anti-corruption effort in Romania; and his receipt of payments from Mujahedin-e-Khalq, a radical Iranian opposition group, while promoting its calls for the US to adopt a policy aimed at overthrowing Iran’s rulers. Giuliani has claimed he has no obligation to register under FARA because he does not do work that involves promoting foreign interests within the United States. He has also never registered as a lobbyist.

These connections by Trump’s legal advisers presumably have no direct bearing on their bid to help invalidate the president’s likely electoral defeat. But the kind of team Trump has assembled says something about the task they are engaged in.