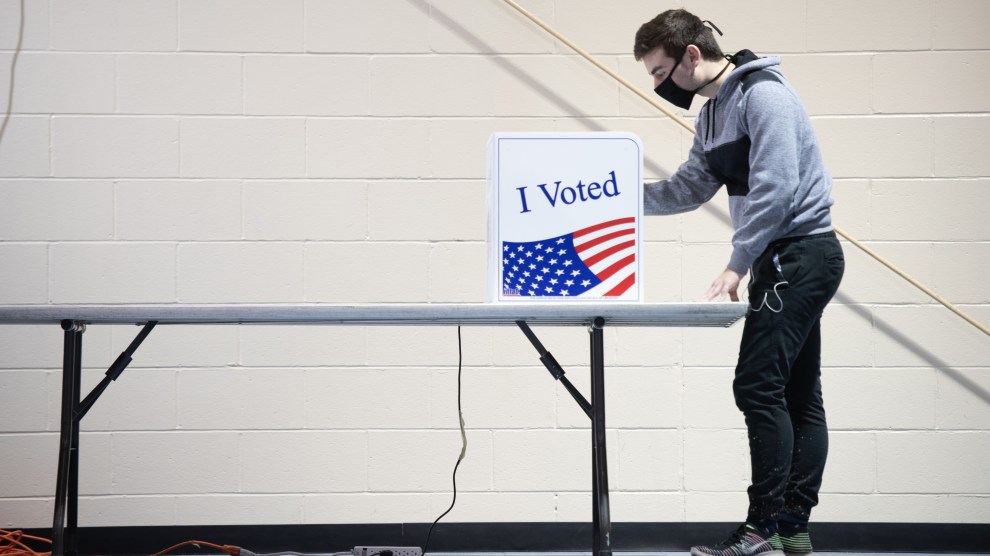 On Thursday, Donald Trump posted a tweet falsely claiming a computerized voting system vendor had switched or deleted millions of his votes. The unfounded allegation appears to have originally been concocted by an anonymous poster on a pro-Trump forum, illustrating a common chain of right-wing disinformation: A baseless conspiracy theory is posted anonymously, a right-wing blogger cites it, a conservative news outlet picks it up, and, next, the president of the United States spreads it as supposed fact.

In this instance, Trump sourced his information to a “report” from One America News Network, a right-wing cable network with a penchant for pumping out propaganda and completely made-up conspiracy theories. In doing so, Trump helped them boost another one.

There’s no reason to believe the claims.

The segment featured an OAN anchor saying an “unaudited analysis of data obtained from Edison Research” showed that “states using Dominion voting systems may have switched as many 435,000 votes from President Trump to Joe Biden” and that “the author also finds another 2.7 million votes for Trump were deleted by Dominion, including almost 1 million in Pennsylvania alone.” OAN added that “analysts say the theft and threat and destruction of votes are attributed to so-called glitches in Dominion software.”

The terms OAN used—“unaudited analysis,” “analyst,” and “author”—may have been selected to make the claim seem legitimate. They also obscure exactly who made it. But the numbers, supposed findings, and rhetoric are nearly identical to a Tuesday post on Gateway Pundit, a right-wing site that regularly publishes falsehoods and hoaxes.

Unlike OAN, Gateway Pundit decided to cite the “analyst” and link to their “research.” As it turns out, it’s an anonymous poster on TheDonald, a pro-Trump web forum. Gateway Pundit admitted that it didn’t verify the poster’s work, calling the analysis “unaudited”—a term of art indicating that the information was found from a random person on the internet.

The anonymous forum poster alleges that the supposed irregularities took place on Dominion voting machines and that the company worked to steal the election from Trump. The New York Times has debunked this, reporting how Dominion software neither caused widespread voting problems nor affected the final counts. Trump’s own Department of Homeland Security released a statement late on Thursday saying there “is no evidence that any voting system deleted or lost votes, changed votes, or was in any way compromised.”

There’s no reason to believe the claims on TheDonald. In attempt to demonstrate alleged irregularities, the poster makes sweeping conclusions about how certain number patterns in the Edison set he claims to draw from prove fraud. They even admit to making mistakes in their work, at one point writing that 2,324 Trump votes disappeared, before editing the post to note they went to third-party candidate Jo Jorgensen.

While anonymous posters can and do find useful data or information that can be verified to form the basis of valuable reporting, here, both OANN and Gateway Pundit openly admit having done no such work to corroborate the data they cite from a forum with a history of posting disinformation along with racist and Islamophobic content.

The anonymous poster’s track record does not inspire journalistic confidence, but includes posts like “IF BIDEN WINS GOODBYE WHITE PEOPLE,” along with others boosting the conspiracy theory that Biden is a pedophile.

The flow of disinformation from a random post on a forum to the president’s feed is part of a growing and ever-quickening trend. Earlier in Trump’s administration, claims from little-known right-wing forums would trickle up to the mainstream right-wing press, where they could be posted by Trump himself, but the process often took longer. Over the last several months, message-board conspiracy theories have reached Trump’s Twitter feed in a matter of days. Today, the pace shows no sign of relenting.