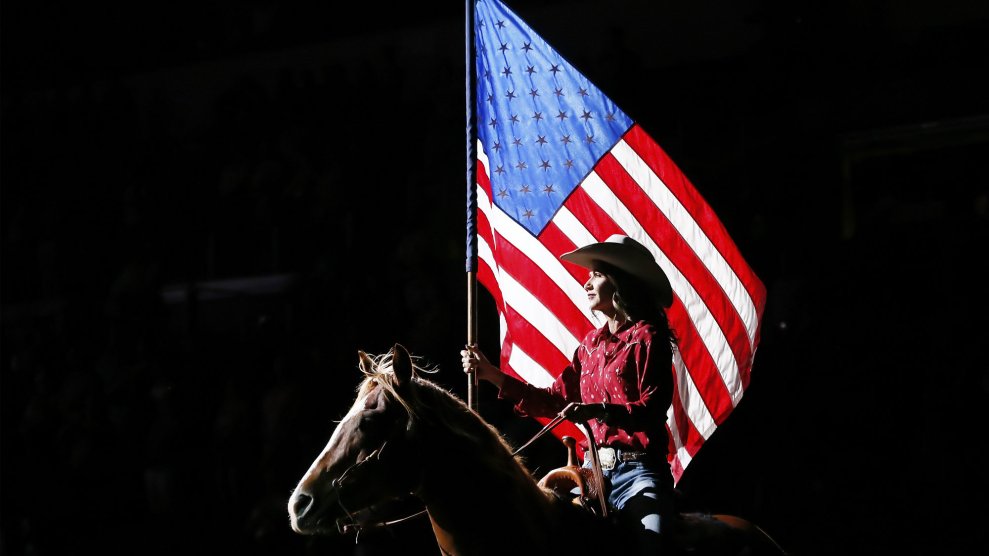 In the spring, when the coronavirus outbreak was concentrated mostly in the liberal Northeast—with a particularly vicious assault on New York City—conservatives balked at the idea of economic aid and mandatory mask-wearing. President Donald Trump didn’t even believe that the city was running low on personal protective equipment for its beleaguered health care workers. Why should the rest of the country be forced to live by so-called New York rules, was the question that some conservative intellectuals posed as they distilled the resentment of the Republican masses. It was frustrating to watch, since clearly the virulence of the virus meant that no region would be spared. And yet, I found some solace when I imagined that once the virus appeared in the states mostly run by Republicans, red state leaders and their constituents would realize the error of their ways and quickly dial back their indifference to mandatory public health in orders to save lives.

Fast forward eight months. More than 250,000 people have died, daily infection rates are the highest on the planet, and the possibility of Republicans taking the gravity of the science seriously seems like a drug-induced dream.

The second wave that every public health expert told us would come crashing down in the fall and winter, overwhelming our hospitals and killing thousands of people each week, has arrived. And yet, despite the dire straits that the entire country is in, and will be in for the foreseeable future, many Republican elected leaders across the country have followed their presidential role model and completely abdicated responsibility.

Since the beginning of the pandemic, there has been a clear way to combat the rate of infection as the world awaits a vaccine: Pay business owners and workers to stay home, make mask wearing mandatory, and restrict activities that are known superspreader events. But the so-called most powerful country in the world (declining fast) made an inhumane political calculation. What’s a couple of hundred thousand deaths in the name of keeping the economy and the Republican party robust? Of course, this has led to a predictable outcome: The United States is now at the intersection of economic calamity and mass death. But as infections skyrocket and the bodies pile up, it appears that the Republican Party has gone from being indifferent to the suffering and death to actually embracing it.

Trump has been stunningly indifferent to the death toll and instead has engaged in a bender of baseless claims of voter fraud while blocking president-elect Joe Biden from getting a running start on a comprehensive, scientifically-based, public health response and vaccine distribution plan. Meanwhile, Trump’s counterparts on the state-level have behaved just as badly. On Wednesday, the White House offered Republicans a deadly playbook. After the Senate adjourned for the Thanksgiving recess without passing legislation for desperately needed economic aid (Enjoy your vacation! We’ll just be over here dying!), Stephen Moore, one of Trump’s economic advisers parroted the same line from the spring, implying that all this suffering and death is simply a blue state problem; everything is just fine in red states.

WH economic adviser Stephen Moore on stimulus: "I don't see Republicans budging on the blue state bailout, and the economy is doing fine — much better than anyone expected. We think the economy is strong because Trump didn't go along with a deal"

Dear reader, everything is not fine in the red states.

According to the New York Times, the top five states with the worst outbreaks are run by Republicans. In North Dakota, the situation is especially dire. Approximately one out of 1,000 resident has died from the coronavirus. Infections spiraled out of control and Republican Gov. Doug Burgum finally implemented a mask mandate, eight months into the public health crisis. By the time he took action, there were only 18 ICU hospital beds available in the entire state and nearly 800 people had died.

Gov. Kristi Noem, who could certainly medal in the best Trump-like response olympics, has downplayed the seriousness of the threat.

The virus is also out of control in South Dakota. Gov. Kristi Noem, who could certainly medal in the best Trump-like response olympics, has downplayed the seriousness of the threat, denied that masks work despite the mounting scientific evidence, and has essentially abandoned South Dakotans to fend for themselves. So far, more than 700 deaths have been reported there. The state, which is home to just 885,000 people, has the highest test positivity rate in the country at 60 percent. In Michigan, which is led by Democratic Gov. Gretchen Whitmire, some Republicans in the state legislature proposed impeaching her for the crime of…implementing coronavirus restrictions. (When they’re not busy protesting life-saving measures, the Michigan Republicans can be found at the White House, trying to help Trump overturn the will of the voters in their own state.)

Texas Gov. Greg Abbott infamously opened up his state much earlier than public health officials advised and tried to ban cities from implementing their own mask mandates before relenting and ordering a statewide mandate in July. Even as infection numbers trended in a dangerous direction, Abbott resisted another a lockdown. This strategy has led to disastrous results. In El Paso, Texas, the situation has become so dire that local officials hired inmates from the county jail at $2 an hour to help move bodies from overflowing morgues. Hospitals are so choked with patients that health care workers are rationing care and sending patients to other facilities. In an effort to slow the spread, city officials implemented a shut-down order. But a group of restaurants and the State of Texas took the city to court, where the order was thrown out. Texas’ attorney general, Ken Paxton, who is being investigated for a litany of white collar crimes, praised the decision saying it’s “important that we do not shutdown the economy ever again.”

I commend the 8th Court of Appeals for stopping El Paso Co. Judge Samaniego’s shutdown order – pending the final decision on the merits. It is important that we do not shutdown the economy ever again, & this decision allows small businesses to continue to operate & pay employees.

Their economic policies with generous tax cuts to the wealthy have yet to make prosperity trickle down to the masses, but the selfish antics of the GOP have certainly reached the wider public. With Thanksgiving right around the corner, public health officials and some elected officials are warning people to stay home and avoid large indoor gatherings—lest dinner turns into a superspreader event. But because the GOP has weaponized every facet of American life into a cudgel for their ridiculous culture wars, there was a revolt among conservatives. Why? you may reasonably ask. Because being told to stay home is an infringement on one of the time-honored traditions of Thanksgiving: the right to spread disease. After all, the Pilgrims also shared their germs with unsuspecting Native people at the very first Thanksgiving.

Every patriot should throw massive Thanksgiving celebrations. Make them fine and arrest all of us. The totalitarianism ends now.

How dare the government take away the right to accidentally kill grandma while eating flavorless potatoes with 25 of family members? Sensible people will skip big celebrations, but conservatives are planning giant indoor celebrations that will certainly lead to more death, with the collateral benefit of owning the libs. One looks in vain for a single responsible Republican leader with enough sway, not to mention courage to distance him or herself from Trump, to convince these people that their lives and the lives of their loved ones are worth more than sticking it to liberals.

While the Democratic Party has had its public fumbles (California Gov. Newsom had to apologize for attending an indoor dinner at a high-end restaurant) and have sowed confusion with restrictions, the Republican Party’s inaction shows the level of disdain for the people who didn’t vote for them— and even those who did. (The virus is shockingly non-partisan.) Despite their outward messaging of being the party of freedom, of a strong economy, and ardent pro-life policies, their dereliction of duty has revealed them as the party of mass death. After a quarter million lives lost—and many more to come—their debased version of freedom is akin to a pitch from a crooked salesperson: For the low, low price of your life, you too can be free.