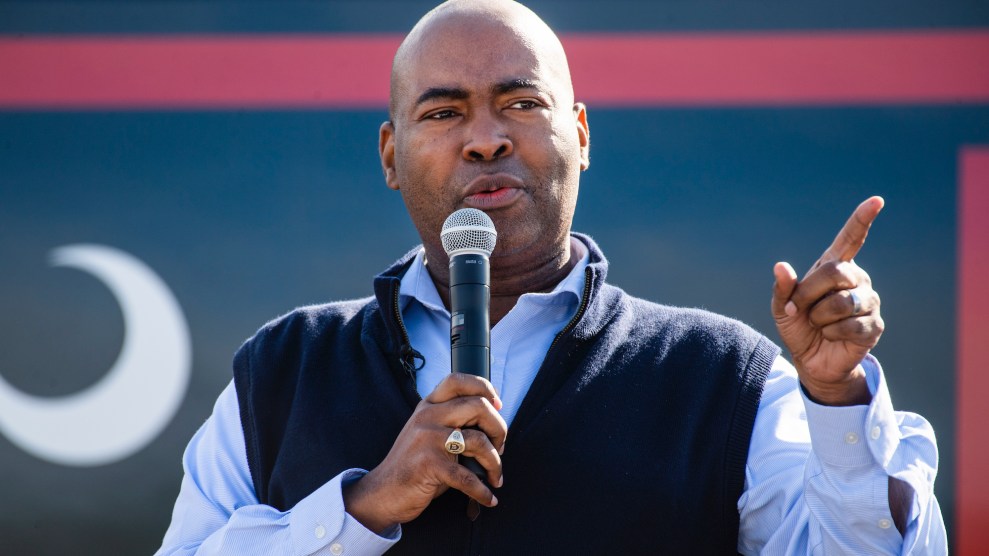 Nearly a year ago, Jaime Harrison told me he was going to go “everywhere” in South Carolina in his challenge to Republican Sen. Lindsey Graham. That was the advice Stacey Abrams, the former Georgia gubernatorial candidate, had given him, and it’s a strategy he himself had preached as an associate chair of Democratic National Committee tasked with overseeing the party’s strategy in the South. “You can win in the South, but you have to invest,” Harrison told me back then. “You have such large pockets of African American voters, and the big thing is you have to persuade them that an election is important enough for them to come out and vote.”

That was the base layer of Harrison’s grand theory of how Democrats could win in the region, one that admittedly sounded rosy against the backdrop of a deep-red state and a race against one of the most recognizable GOP senators in the country. Long before Harrison was the Democratic It Kid he’s become, I traveled down to South Carolina to see that shoe-leather hypothesis in action. Over two days and 400 miles, I watched Harrison hold events at four of the state’s historically Black colleges, most of which were attended by only a handful of students and faculty. On the walks to and from the car, he’d stop the custodians, the secretaries, and the students rushing to class to introduce himself and ask them about their day. “You can’t give up on anybody,” Harrison told me, another Abrams-ism she’d passed along.

“You can win in the South, but you have to invest,” Harrison told me.

“Everywhere,” of course, didn’t happen. Harrison had been a third of the way through a 46-county tour when the coronavirus pandemic forced him off the trail in March. But the bet Harrison made about the viability of a Democrat in South Carolina just might come to pass. In the weeks leading up to Election Day, race watchers began to rate Harrison’s challenge to Graham a toss-up, a massive shift from a year ago when Harrison’s challenge barely registered on their radars. Win or lose, Harrison hopes he’s proven what he told me he was setting out to do at this time last year: “Getting people to believe” that the Democratic spirit “is alive and well in the South.”

When I caught up with Harrison at the end of October, he sounded a lot like the rest of us. “I’m tired,” he told me. “November 3 can’t come soon enough.” The campaign had reached its final crescendo, but Harrison was still balancing school and childcare duties for his 6- and 1-year-old with his wife, who’s teaching 200 students between two classes at the University of South Carolina’s law school. The largely virtual existence had spared him the “whole-body experience” of campaigning in the South, but that was supposed to be his way in. “You’re eating, you’re fellowshipping, you’re connecting with people, telling stories, and to not be able to do that is difficult,” Harrison says. “And running against a guy who has 95 percent name ID, and your name ID is less than 20 is, you know, even more difficult.”

Money, of course, has helped make up the difference. The flow of it may have had less to do with Harrison than who he was up against. Though Graham once enjoyed a reputation for being a reasonable (albeit staunch) conservative, 2020 has been one long opportunity for the three-term senator to show his fealty to Trump, to whom he’s taken, in the words of one Republican operative to Rolling Stone, like a “pilot fish” who “hovers about a larger predator, like a shark, living off its detritus.” Graham has defended his president against an impeachment vote, shuttled a late-breaking conservative SCOTUS nominee through the confirmation process, and toed Trump’s line on COVID-19, refusing tests, masks, and relief bills at every turn.

Harrison, meanwhile, followed in his wake like an ActBlue ShamWow, absorbing liberals’ frustrations in dollars and cents. The Democrat has raised a whopping $109 million; $57 million of it flowed in from July through September alone, shattering the record for the highest quarterly fundraising total of any US Senate candidate. The mammoth amount allowed Harrison to get advertisements up on television as soon as it became unsafe for him to campaign in person. “It was important for folks to get to know who I was,” he says.

“Harrison is from the state, he has relationships here, he’s able to talk about growing up in Orangeburg and how he shares some of the values that are important to all South Carolinians.”

But for all the ways national attention has powered the race, Harrison tries not to let his own attention veer too far beyond state lines. He wouldn’t take the bait, for example, when I asked him whether he thought Sen. Dianne Feinstein’s (D-Calif.) embrace of Graham, both literally and figuratively‚ at the conclusion of Amy Coney Barrett’s Supreme Court confirmation had hurt his case. “That’s water under the bridge for me,” Harrison tells me. “I try to leave the Washington, DC, stuff—there are enough pundits to talk about that.” He pivoted back to Graham’s failure to deliver for his state: How was it that Graham was able to rush through a Supreme Court justice but couldn’t pass a COVID-19 relief bill with the same urgency?

It’s a worthwhile strategy in a state that will almost certainly support Donald Trump on Tuesday. Most polls—which have given a slight edge to Graham—show a number of Trump-Harrison voters, a phenomenon explained by the “leeriness” around supporting a Democrat for nationwide office but a willingness to back a homegrown one for a lower seat, says Gibbs Knotts, a professor of political science at the College of Charleston. “Harrison is from the state, he has relationships here, he’s able to talk about growing up in Orangeburg and how he shares some of the values that are important to all South Carolinians,” Knotts says. “Though he has a Democratic label, he’s not running commercials about being a Democrat.”

There are an awful lot of commercials: Harrison spent $34 million of his massive third-quarter haul on TV alone, while another $8 million went to digital and $2.2 million to radio ads that specifically targeted Black voters. But he’s also been able to fund one of the most robust ground operation state Democrats have ever seen. That’s one reason why, in addition to Harrison’s tight race, South Carolina Democrats also have a shot to flip the state senate.

When it comes to assessing his own odds, Harrison has been willing to venture into punditry. The polls have taken on, in his words, a “sort of schizophrenic” quality. “They’re all within the margin or error, or [are] close to the margin, or under sample Black voters or whatever,” he tells me. “It’s gonna be close, and it’s about turnout.”

Win or lose, Harrison believes his run has proven what he set out to do. “At least in the short term, [it] dramatically changed the trajectory of Democrats running in South Carolina, and I hope it means running in the South in general,” he says. “This perception that we should just give up on the region, I hope we have dispelled that.”