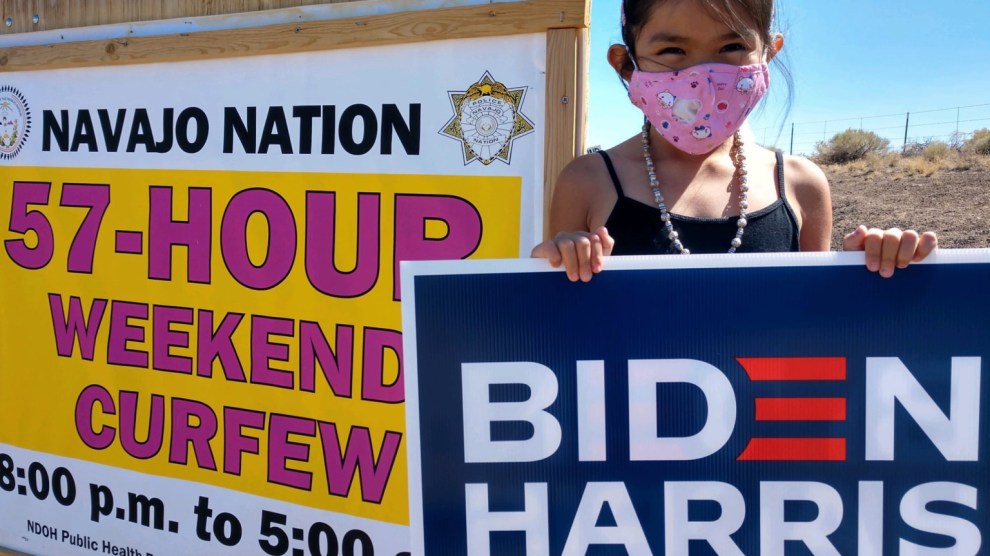 In early March, Jaynie Parrish was living in Washington, DC, managing social media for Emily’s List, a pro-choice political action committee, when she learned that COVID-19 was tearing through her homeland, the Navajo Nation. She “freaked out” hearing that the virus had already killed ten people there; in less than three months, hundreds more would die as the reservation’s case rate surpassed that of any US state. Parrish felt she needed to do something. So when a Navajo leader invited her to spearhead an Indigenous voting project, she quit her job and moved home to Arizona.

As campaign director for the Northeast Arizona Native Democrats, a coalition of Democratic groups from heavily Native counties, Parrish led a grassroots team in running a ground game like none their region had seen. Their goal was to unite Navajo, Apache, Hopi, and other Indigenous voters into a bloc that could help turn the state blue for the first time in 24 years. Native leaders have long argued that Democratic campaigns fail to treat their communities as a group with the voting power to tip the scales in state and national elections. This year, the devastation the pandemic has brought to Arizona’s Native communities, thanks largely to the president’s negligence, was yet another reason to believe reservation voters might not choose Trump. COVID-19 “was in our face day-to-day,” says Parrish, recalling one teammate showing up to canvass three days after losing a relative to the virus.

Their efforts paid off: Navajo precincts went 60 to 90 percent for president-elect Joe Biden, and neighboring tribes voted similarly. Six percent of Arizonans are Indigenous, and the Navajo alone comprise about 67,000 registered voters—six times the number of votes by which Biden won the state. Yet these results were no thanks to the Biden campaign; like the Latinx organizers that pounded the pavement to register and mobilize their own communities, the Navajo and other tribes helped flip Arizona for a party that’s largely taken them for granted.

“It was a constant pull, with us saying, ‘you need to do this.’ They didn’t always listen,” says Parrish of her group’s efforts to get national campaigns involved. The Native coalition would’ve loved to have “Biden money,” or funds from Democratic Senate candidate Mark Kelly (who also won his race thanks in part to Native voters). But for most of the race, neither campaign chipped in, says Parrish. “Everything was on our own. No one else was going to do it.”

They ended up winning financial support from liberal groups in other states. Parrish and Eric Kramer, a non-Native ally who chairs the Navajo County Democrats, wrote articles for the Daily Kos about how Indigenous voters could flip Arizona; that online community raised $300,000, while supporters of Crooked Media and Swing Left San Francisco helped bring the grand total to $450,000—most of it raised without Democratic establishment support.

The coalition was thus able to hire an army of local Indigenous organizers, many of whom had coordinated mutual aid on reservations in the pandemic’s early days, to reach the Navajo, Hopi, White Mountain Apache, San Carlos Apache, and others. As these reservations lifted lockdown orders, organizers and volunteers went door-to-door registering voters at a distance. They tabled outside of stores and led “car parades,” covering the massive expanse of the northeastern desert by driving through neighborhoods with PA systems, reminding voters of deadlines and promoting Democratic candidates.

Democratic Rep. Tom O’Halleran, whose constituents include the Navajo, Hopi, and more Indigenous people than any other congressional district in the country, participated in car parades, while Mark Kelly ran radio ads in the Navajo language, which Parrish says helped reach the many older voters who don’t speak English. But besides Dr. Jill Biden visiting Navajo Nation in 2019 and speaking virtually with the reservation’s first lady in August, Parrish can’t recall any surrogates from Biden’s camp coming to the region.

Meanwhile, Navajo, Hopi, and Apache voters struggled to even get Biden-Harris campaign signs. “That was an indicator of the campaign’s need to invest more,” says Parrish, who watched the signs proliferate across other parts of Arizona. Her team bought materials and invited community members to make their own colorful signs, some in Indigenous languages. The campaign finally sent signs, along with money for radio ads, in the final weeks of the race.

Even with limited star power and resources, the Northeast Arizona Native Democrats had massive success in the five counties they canvassed, registering over 21,000 new voters and expanding turnout by about 48,000 votes—a 30 percent increase over 2016. Precinct data from ABC15 Arizona shows that Indigenous communities in other parts of the state also voted solidly blue; the Tohono O’odham Nation, whose lands and sacred sites are being decimated by Trump’s border wall, went over 90 percent for Biden.

With a lot of talk about Native voting in Arizona. I thought I would share 2 maps. The left is a map showcasing all 22 tribes in the state. The right an updated 2020 voting results maps by precinct. This give you an idea of how Indigenous communities voted in the 2020 election. pic.twitter.com/scrWENDVO2

Despite the progress, Parrish sees a lot of missed opportunities. Personal visits could’ve turned Arizona more solidly blue, she says. That kind of strategy paid off for Trump, who won North Carolina after visiting the state 11 times between late July and early November; his last-minute rally in Lumberton helped win Robeson County, where 40 percent of the population belongs to the Lumbee Tribe. Robeson narrowly went for Trump in 2016 after going twice for Obama; this year it chose Trump by a whopping 18 points.

Having worked in DC and on national campaigns, Parrish thinks the main reason Native voters get overlooked (even as their numbers swell) is a lack of non-white representation among decision-makers. Her coalition is thus looking to get Natives elected to Democratic county boards and statewide offices in Arizona. “There’s no reason we can’t have a dozen Native people in our legislature like they have in Montana, or Washington, or New Mexico, places where they’ve built strong turnout programs,” she says.

But grassroots leaders can only do so much from the ground up. Parrish’s team hopes that what happened in Arizona will pique the interest of campaigns, and that national Democrats will start asking Native organizers what they need to engage people in the party year-round, not just during elections. That starts with soliciting communities’ input on policies that affect them. “We’d love for them to catch up with us, especially since we delivered the win,” says Parrish. “But we’re gonna keep doing our work and holding their feet to the fire, because we’ll still be here regardless.”