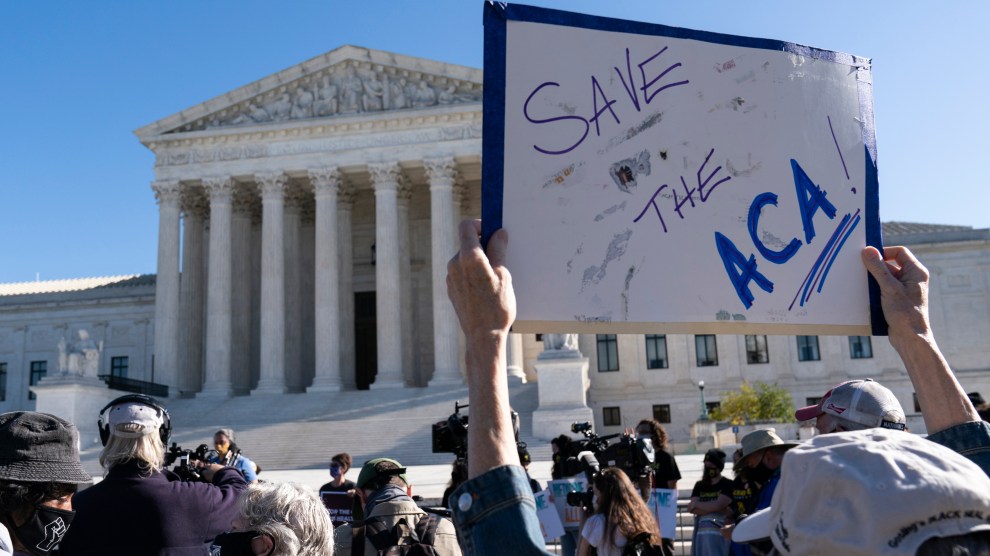 The Supreme Court heard oral arguments Tuesday morning in the Trump-backed lawsuit that threatens to undo the entirety of the Affordable Care Act—but even the court’s conservative justices seemed skeptical of tossing out the whole law.

The case hinges on whether the essential eradication of the individual mandate—the part of the law that requires people to pay a penalty for lacking insurance, which was set to $0 as a part of tax cuts passed by Congress in 2017—invalidates the rest of the ACA. And while the case is far from decided, conservative justices, including Chief Justice John Roberts and Brett Kavanaugh, suggested that they believed that the individual mandate could be excised from the ACA without tarnishing the rest of the law.

As the New York Times reports:

But at least five justices, including two members of the court’s conservative majority, indicated that they were not inclined to strike down the balance of the law. In legal terms, they said the mandate was severable from the rest of the law.

“It does seem fairly clear that the proper remedy would be to sever the mandate provision and leave the rest of the law in place,” said Justice Brett M. Kavanaugh.

Chief Justice John G. Roberts Jr. made a similar point. “Congress left the rest of the law intact when it lowered the penalty to zero,” he said.

That’s right: The lawsuit is so weak that it appears, at least on their questioning during oral arguments, that even the court’s most conservative justices think it’s a legally dubious. Other conservatives on the court also asked questions about the standing of the Republican state attorneys general who brought the case as plaintiffs, leaving open the possibility that a larger majority of the court could reject the case on issues of standing without ruling on the merits (questions from the three liberal justices all indicated skepticism of the case). Of course questions during oral arguments are not always indicative of how a Supreme Court justice will vote on a final ruling, so the fate of the entire ACA remains in limbo until the court offers its final decision.

But the general tone of Tuesday’s arguments bodes well for the millions of Americans who rely on the ACA or expanded Medicaid for their coverage, or who benefit from provisions like those that protect people with pre-existing conditions or allow young adults to stay on their parents’ plans until age 26.

A ruling on the case isn’t expected until sometime in 2021.