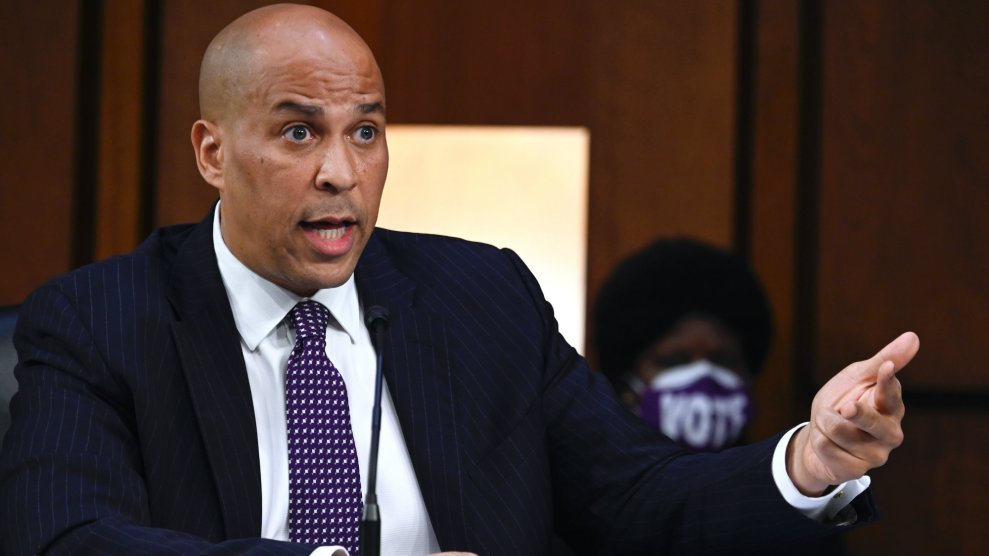 Over the summer, the name Sen. Cory Booker (D-N.J.) was deployed by President Donald Trump to be the handy shorthand for hordes of Black people and poor people invading the suburbs. With his poll numbers dropping, especially among white women who live in the suburbs, Trump tried to appeal to their fragile sensibilities by scaring them with racist tropes.

“So you have this beautiful community in the suburbs, including women, right? Women. They want security,” Trump said on Fox News in August. He claimed that he ended a program that had attempted to increase mixed-income housing in certain communities through zoning laws, but that Biden would bring it back—turbocharged. “And you know who’s going to be in charge of it?” he paused for the punch line. “Cory Booker! That’s going to be nice.” The message was implicit: Nice white ladies, beware. A Black man is coming.

Since then, the line has been a staple at countless Trump rallies, as the president continues to assume that fomenting baseless fears can be his most successful get-out-the-vote motivator.

It seems obvious that Trump wishes he were running against anyone but an old white guy. None of the attacks he used in 2016 against Hillary Clinton and Barack Obama are sticking to Biden, so the president has been forced to invent “the most frightening Black man in America” as a way of keeping his mostly white base in a constant state of panic. Who’s afraid of the scary Black moderate?

It seems obvious that Trump wishes he were running against anyone but an old white guy.

Booker first made a name for himself on the national stage as Mayor of Newark, New Jersey. In December 2010, he went viral during a blizzard in the area after live tweeting his romp around the city digging residents out of the snow. Meanwhile, Trump was mostly tweeting about his NBC reality show The Apprentice. In October 2013, Booker won a special election for the US Senate, and Trump had become a leading proponent of the racist lie that Barack Obama was secretly born in Kenya. The two lives of these men never intersected.

But now it’s 2020 and we are in unusual times. Cory Booker gained even more name recognition after launching a presidential bid in 2019. Just to be clear, the vegan senator is not a radical.

Despite Trump painting him as a nefarious agent of the far left, Booker’s record reveals that he is not even the most liberal member of the US Senate. Indeed some of his positions on key issues are even GOP-friendly. As Newark mayor, Booker was a prominent backer of charter schools and oversaw their expansion in the city. He also oversaw a “zero tolerance” crime strategy that critics say led to discriminatory policing, a sharp contrast from the reformer space in which most Democrats operate today. But it’s not just his record as mayor that illustrates his moderate bonafides. Last year, Booker reached across the aisle and co-wrote legislation with Sen. Tim Scott (R-S.C.) on opportunity zones, a program that incentivizes developers with to build in low-income communities. Trump routinely touts it as one of his many, many great accomplishments for Black people.

Other Republicans have followed Trump’s lead in going after Booker. Madison Cawthorn, a Republican running for a House seat in North Carolina, came under fire last week when his website attacked his opponent for working for “non-white males, like Cory Booker, who aims to ruin white males.” In August, Cawthorn was criticized after he posted pictures of a visit to Hitler’s vacation retreat on social media saying it had been on bucket list for awhile and “did not disappoint.”

Per @Timodc, congressional hopeful Madison Cawthorn's campaign is attacking a local reporter (who is a retired Pulitzer winner) for his "work for non-white males, like Cory Booker, who aims to ruin white males." https://t.co/JVv9YuFpB1 pic.twitter.com/90tOBZlqCy

Fortunately for Trump, Biden chose Sen. Kamala Harris (D-Calif.) as his running mate. Finally, he’d get to do some fear-mongering about a Black candidate—plus, she’s a woman! First, he encouraged birther lies about Harris. Then, with the help of the conservative media apparatus, Trump criticized Harris as being a “socialist” who was simply waiting in the wings before putting into place her secret plot to transform the Biden agenda into a far left takeover of America.

In a recent 60 Minutes interview on CBS, Harris laughed when the anchor Norah McDonnell asked her if she was a socialist. And that’s because no matter how badly Republicans want the vice presidential candidate to be hellbent on a socialist takeover of the United States, the facts don’t add up. Before becoming a senator, Harris was California’s attorney general and before that San Francisco’s district attorney—otherwise known as the top cop. This does not deter the Trump campaign from using Kamala-is-a-Cop as a smear. But wait? Doesn’t Trump love law enforcement? Aren’t the people who dispense “law and order” good? Apparently not that depends on race and gender—not to mention political affiliation.

Trump has been unable to articulate his specific plans for a second term even though the multiple crises he faces, public health and economic to name just two, demand immediate action. Instead, he just spends his time trying to smear Booker with a bizarre accusation that he will ruin the cherished American suburbs. But he’s not running against Booker and unless there is some kind of seismic shift in the political world in the next few days, Biden will receive New Jersey’s 14 electoral votes next week. So, why the continued fixation on the moderate Senator from New Jersey? We already know the answer. Cory Booker is Black. And as far as Trump is concerned, running against Blackness is sure to be a winning approach.