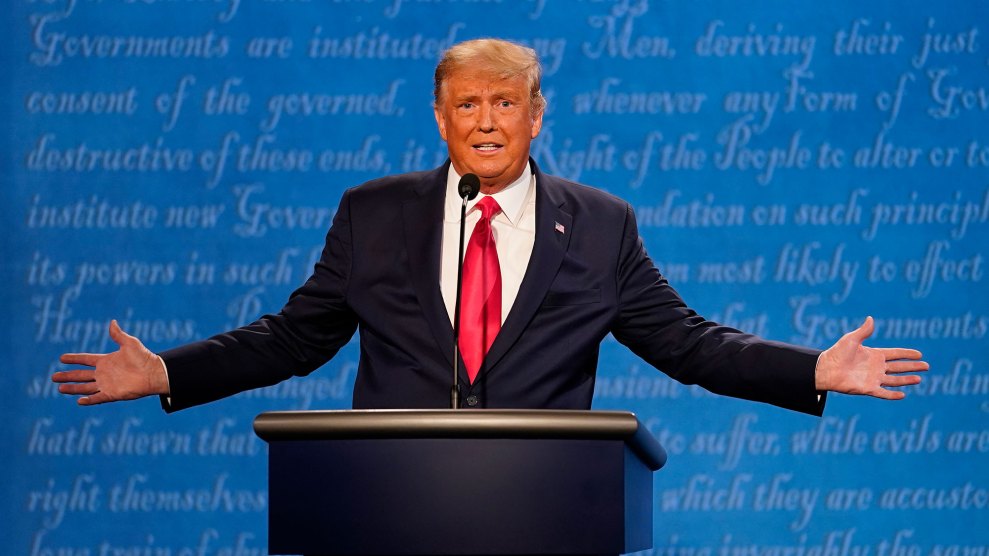 During Thursday night’s debate, President Donald Trump repeated one of his most disgusting lies: The Obama administration, he claimed, created family separation, and his administration ended it. “They did it,” Trump said. “We changed the policy.” There is not even a sliver of truth to that.

Former Vice President Joe Biden responded forcefully, and accurately. “They separated them at the border to make it a disincentive to come to begin with,” Biden said. “Coyotes didn’t bring them over. Their parents were with them. They got separated from their parents. And it makes us a laughingstock. And it violates every notion of who we are as a nation.”

Wow. Donald Trump just said that only immigrants "with the lowest IQ" come back for court hearings under 'catch and release' #Debates2020 pic.twitter.com/GP0jfDcd4H

The Obama administration did not separate families to deter people from coming to the United States. In the spring of 2018, after a similar pilot program the year before, Trump’s Justice and Homeland Security Departments launched a “zero-tolerance” policy across the US-Mexico border. Under zero tolerance, parents were prosecuted for the misdemeanor offense of crossing the border without authorization. That led to parents being separated from their kids, who could not be in jails while their parents awaited trial.

This was not an accidental byproduct. It was the point. “We need to take away children,” then-Attorney General Jeff Sessions told Justice Department prosecutors. Following a massive public backlash, the Trump administration abandoned the policy less than two months after it began.

The total number of families separated by the Trump administration will likely never be known, since it did not initially keep track of separations. The government has since said that about 5,500 children were taken from their parents under its watch.

Not surprisingly, Trump managed to fit in more lies during the immigration segment of the debate. He claimed, for example, that less than 1 percent of immigrants show up for their court dates. “Only the really—I hate to say this—but those with the lowest IQ, they might come back,” Trump claimed.

Recent data from the Transactional Records Access Clearinghouse, a research center at Syracuse University, showed that about 99 percent of asylum seekers show up for their court dates. Data from Trump’s own Justice Department showed that about 75 percent of people showed for up their immigration court hearings in 2018.

On Wednesday, lawyers in the family separation case brought by the American Civil Liberties Union said that the parents of 545 children still haven’t been found. About two-thirds of those parents were deported to Central America without their children. Typically, their kids would have been released from government custody to live with relatives in the United States, although some likely ended up living with foster families.