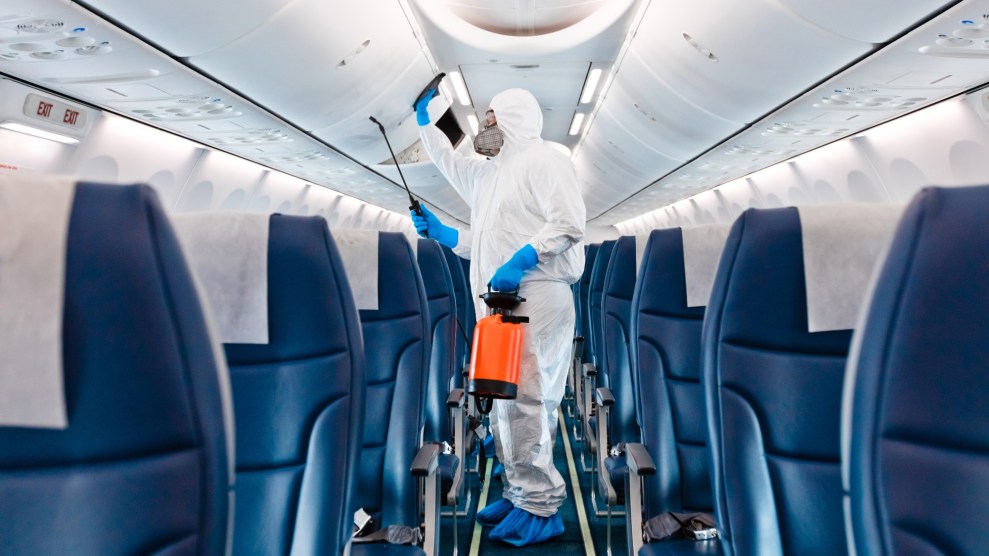 In the spring, Congress created a program to save aviation worker jobs. Then the Trump administration undermined that program by granting hundreds of millions of dollars in relief to aviation companies for jobs they’d already largely eliminated, according to a House report released Friday.

As a result, thousands of workers at airline caterers and other contractors are out of work while their employers received public funds that were supposed to be passed to workers. What’s more, at least two companies that received hundreds of millions in taxpayer funds restored full pay to management, the report found.

The report follows a monthslong investigation that the House Select Subcommittee on the Coronavirus Crisis launched in July, citing ProPublica reporting on the program.

The $32 billion Payroll Support Program, part of the sweeping CARES Act to rescue the economy from the ravages of the coronavirus crisis, was designed so that money would pass through companies to workers in the hard-hit aviation industry. The federal government gave grants and some loans to airlines and their contractors, who were then meant to keep workers on their payrolls. The amount each company received would be based on six months worth of payroll from last year. In exchange, the companies had to agree not to conduct any layoffs until October, about six months after the CARES Act was passed.

But ProPublica found that the companies laid off workers throughout the spring and then took the money intended to preserve the jobs they had already cut. The Treasury Department, charged with implementing the law, offered no incentive for the companies to rehire their workers.

“Treasury’s implementation of the Payroll Support Program undermined the program’s job preservation purpose,” the subcommittee wrote. “Treasury permitted aviation contractors to lay off tens of thousands of workers through the worst months of the pandemic and still receive full payroll support calculated based on pre-pandemic workforce numbers—the same amount they would have received if they had not laid off a single worker.”

In response to the report, a Treasury spokesperson wrote that “the Payroll Support Program has supported hundreds of thousands of aviation industry jobs, kept workers employed and connected to their healthcare, and played a critical role in preserving the U.S. airline industry. Implementation focused first on the largest employers to help stabilize an industry in crisis and support as many jobs as possible for as long as possible.”

In the case of one contractor, Swissport U.S.A., the subcommittee uncovered correspondence in which a company executive instructed managers to “urgently” verify the employment status of a group of workers prior to finalizing the company’s Payroll Support agreement, and to let them go if they weren’t needed.

“CARES is now imminent, and we need to ensure that we don’t incur unnecessary costs once the ink is on the paper,” the executive wrote, referring to the workers, weeks before the company received $170 million from the program.

Swissport did not respond to a request for comment.

The subcommittee also took to task two airline catering companies that ProPublica wrote about in July, Gate Gourmet and Flying Food Group, for taking advantage of the program.

The report found that the companies drastically reduced their payroll ahead of applying for the relief funds, and continued to do so while their applications were pending. But once the agreements were finalized, neither restored employment to pre-pandemic levels. In fact, the subcommittee found that Flying Food Group, which received $85 million through the program, had not rehired a single worker out of the thousands it laid off or furloughed since the pandemic hit.

Meanwhile, both companies have since restored cuts that had been made to management pay. Both expect the money they received from the Payroll Support Program to subsidize their payroll expenses well into next year, according to the report.

Rep. James Clyburn, D-S.C., who chairs the select subcommittee, has called for aviation companies to halt any additional layoffs until they have spent the remainder of the funds they received.

However, since the Sept. 30 deadline for halting layoffs under the CARES Act expired, Flying Food and Gate Gourmet have already initiated hundreds of additional layoffs at airports across the country, according to official layoff notices issued by the companies in recent weeks.