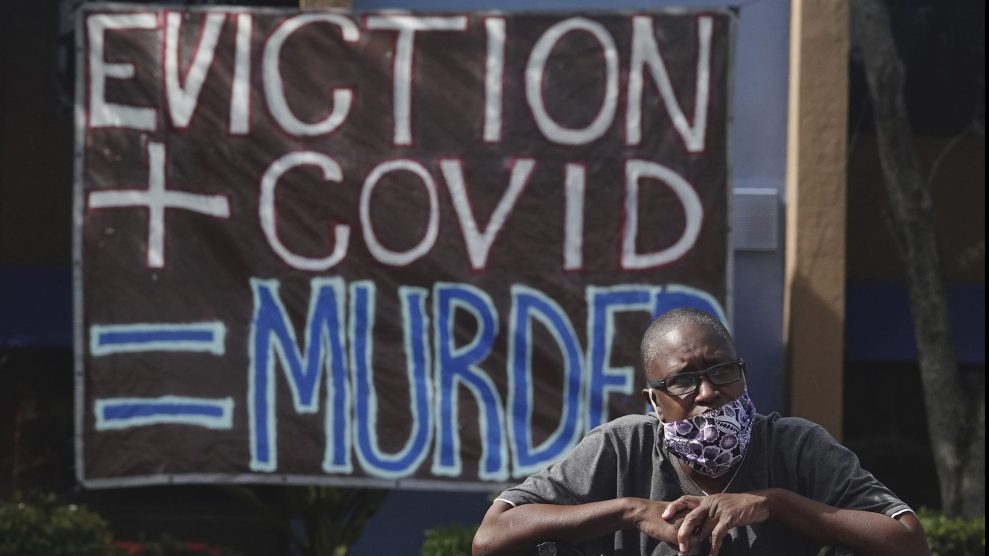 Last month, the Centers for Disease Control and Prevention established a national moratorium on evictions until the end of the year, as a way to protect tenants who have been hit by financial hardship as a result of the coronavirus pandemic shutdowns. But a county in Missouri has already violated the order by allowing eviction proceedings to continue, according to an ACLU lawsuit filed on Wednesday.

On September 4, the same day that the CDC order went into effect, Jackson County, Missouri, which includes half of Kansas City and a population of 700,000 people, filed its own administrative order. Ostensibly, the county order interpreted and implemented the national moratorium, but, in fact, it “directly conflicts with and interferes with the CDC moratorium,” says Linda Morris, the ACLU lawyer who filed the suit on behalf of KC Tenants, a Jackson County tenants’ rights group. The lawsuit was filed against Jackson County’s 16th Judicial Circuit Court, which filed the administrative order.

The CDC order allows tenants to declare that they’re not able to pay rent, so they would then be able to defer rent payments until 2021. The Jackson County administrative order establishes a framework for continued evictions while the CDC order is in place. “It explicitly permits landlords to file and pursue eviction actions,” Morris says. The order also creates a system of “eviction-plus” hearings, where landlords may challenge tenants who claim they can’t pay, Morris says, “by demanding all sorts of personal and financial records.” The ACLU claims that instead of enforcing the CDC order, the terms in the administrative order actually violates it.

“It explicitly permits landlords to file and pursue eviction actions.”

For millions of US residents, the CDC evictions moratorium couldn’t have come soon enough. Similar efforts to prevent tens of millions of people from losing their housing were contained within the CARES Act, an emergency bill passed by Congress last March to curb the most immediate and dire economic consequences of the pandemic. But those protections effectively expired on August 25, putting 13 million households at risk of eviction by year’s end. Then the CDC stepped in, noting that evictions could jeopardize efforts to contain the spread of the virus. The tenants’ rights community hailed the CDC order as providing a necessary safeguard, but some worried that it fell short. Conditional protections required a written declaration from tenants, for instance, and those who didn’t meet certain income requirements still could be evicted.

The Missouri administrative order is exactly what tenant activists most feared. “Every tenant deserves the right to safe, accessible housing, “said Tara Raghuveer, director of KC Tenants, in a press release. “The Jackson County courts are allowing landlords to strip tenants of that right by evicting them in the middle of a pandemic and economic crisis. It’s inhumane and unconstitutional.”

The county order allowed landlords to file a “verification” to the court stating that a tenant who has not paid rent doesn’t meet the conditions for protection outlined by the order. Once a verification is filed, the property owner may begin to “recover possession of any residential property for the nonpayment of rent,” the order says. If the tenant has already filed their declaration form—claiming they can’t pay rent—the county’s administrative order moves the process to court, where an evidentiary hearing can “challenge the accuracy or veracity of any statements in the Declaration Form,” according to the order.

The ACLU argues that Jackson County’s order violates the CDC’s demands, and that the evidential hearings violate civil liberties. “These evidentiary proceedings will allow landlords or property owners to harass or retaliate against tenants who seek protection under the Moratorium, thereby discouraging tenants from exercising their federal rights,” the complaint claims. In fact, according to KC Tenants, 284 evictions have been filed in the county since the CDC and county orders went into effect.

Even if the US District Court for the Western District of Missouri—where the ACLU submitted its case—ultimately rules against Jackson County, damage will already have been done. According to Morris and KC Tenants, landlords have been requesting evidentiary hearings in almost every pending eviction case. What’s more, those facing eviction rarely have legal representation when defending themselves in court. In Houston’s Harris County, several hours south, only three percent of tenants have an attorney present for proceedings.

Those tenants who are ultimately spared from being evicted often suffer downstream consequences. Even if the tenant is exonerated, the eviction filing is still visible to future landlords. “The perfect parallel is arrest and eviction,” says Morris. If someone is accused of wrongdoing and vindicates him or herself, the initial accusation can continue to raise questions. As a result, Morris notes, “These eviction filings are really denying access to housing for years to come.”