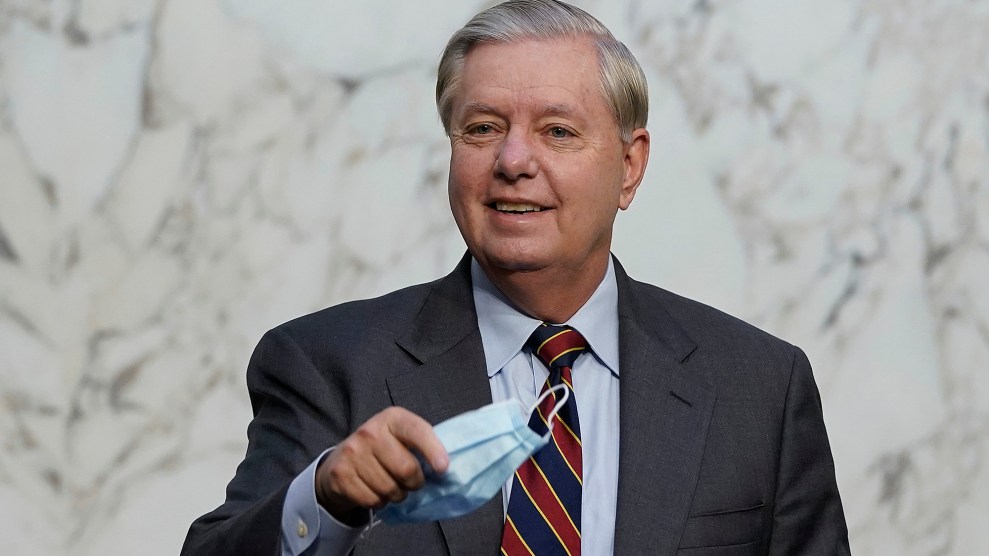 As the Supreme Court confirmation hearings for Judge Amy Coney Barrett entered its second day on Tuesday morning, Senate Judiciary Chair Sen. Lindsey Graham (R-S.C.) decided to dedicate his opening statements to a takedown of the Affordable Care Act and his tough reelection fight against Jaime Harrison, his Democratic challenger.

“Obamacare has been a disaster for the state of South Carolina,” Graham said. He argued that premiums have risen among those who receive their health care through the federal exchanges and blamed the closure of rural hospitals in South Carolina on the program. He then launched into a description of his own health care plan, which would involve bloc grants to states. “We want South Carolina Care, not Obamacare,” Graham snarled.

The Affordable Care Act, it turns out, has not quite been the “disaster” Graham suggests. The uninsured rate has dropped in South Carolina since Obamacare’s rollout, according to census data. Before coverage was available for purchase in the federal health insurance marketplace in 2013, 15.8 percent of South Carolinians were uninsured. By 2016, that rate had fallen to 10 percent, though it has since crept back up to 12.7 percent as President Trump has whittled away at the law. Over 190,000 people in the state buy insurance through the ACA’s exchange, and 93 percent of them receive federal subsidies to offset costs thanks to the law. As of 2018, 30 percent of the state’s adults have preexisting conditions that would preclude them from insurance coverage if Obamacare is wiped out by the Supreme Court, which is set to hear a case on the subject one week after Election Day, with Barrett potentially casting the ninth vote.

The drop in the uninsured rate following the ACA’s implementation has repeated itself across many states—especially those that also opted to expand eligibility for Medicaid coverage, which South Carolina has not. There are many reasons that the rural hospitals Graham spoke about are struggling, but studies have shown that they close at higher rates in states that rejected Medicaid expansion.

Harrison, who’s now neck-and-neck with Graham in recent polls, has centered much of his campaign on protecting and modestly improving upon the Affordable Care Act. “With the ACA’s day in court just weeks away, it’s no wonder that Sen. Graham is rushing to fill this vacancy,” Harrison said in a statement following Graham’s remarks. “He has tried and failed to repeal [the] Affordable Care Act the Senate, so is now trying to push repeal through the courts.

Graham couched his remarks as a response to his Democratic colleagues, who uniformly devoted their opening statements to portraying Barrett as a threat to Americans’ health care. They argued that Barrett, if confirmed, would overturn the Affordable Care Act and abortion rights, another issue expected to again find its way before the Supreme Court soon. Graham called his colleagues’ tactics a “political fight,” one that “has nothing to do with this hearing.”

But as he did, he twice took the unusual step of mentioning his tough reelection battle from the dais. “That’s the political debate,” he said. “We’re involved in a campaign in South Carolina, and my fate will be left up to the people of South Carolina.” Though Graham had been expected to cruise to reelection, election watchers have recently called the race a “toss-up,” and Harrison has been breaking fundraising records.

The most appropriate venue for such remarks might have been on a debate stage with Harrison. But Graham, who had been milling maskless around his GOP Senate colleagues who had tested positive for COVID, refused to get tested, and the debate was subsequently canceled and replaced with back-to-back individual interviews with local television journalists.

This story has been updated to include Harrison’s statement.