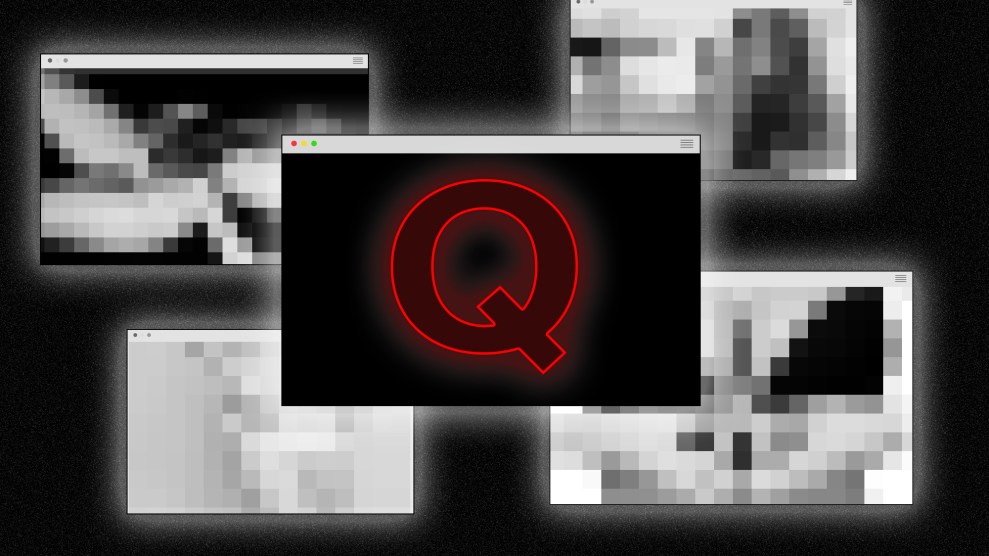 One dark irony of QAnon has always been that the conspiracy theory, which holds that President Trump is waging a war on a cabal of elite liberal pedophiles, rose to prominence on 8chan, an imageboard where users swapped child pornography.

But that irony may have a darker, deeper layer: Mother Jones has uncovered that Jim Watkins, the owner of 8chan and its successor site, 8kun, controls a company that hosted scores of domains whose names suggest they are connected to child pornography.

While Mother Jones did not visit the domains because of strict laws related to viewing child sex abuse material, internet registration and hosting data suggest at a minimum that Watkins profited from domains with names explicitly related to pedophilia—the very thing that QAnon followers say that they’re motivated to end. The domains’ names include terms such as “preteen,” “schoolgirl,” and “child” alongside graphic terms for genitalia and words like “rape” and “love.” It’s unclear what, if anything, is currently being served at the domains. However, an analysis of metadata collected years ago from one by archive.org shows dozens of filenames and links containing highly suggestive terms, including “xxxpreteen,” “children,” and sexual references to girls aged 12 to 15.

Some of the domains date back to the late 1990s and may no longer be active, while others currently resolve to IP addresses controlled by Watkins’ company, N.T. Technology, according to records compiled by Farsight Security, a cybersecurity company that archives historical routing data detailing relationships among domain names, IP addresses, name servers, and other digital assets.

Watkins, who some experts believe has an active role in maintaining the QAnon account on 8kun, dismissed Mother Jones’ questions about the domains as “an attempt to smear [his] name and print something awful,” offering varying explanations why they were on N.T. Technology’s servers. “We’re not child pornographers, and we don’t host child pornography, and we don’t condone that,” he insisted.

A group of anti-Q researchers that includes Aubrey Cottle, a founder of the online collective Anonymous, brought Watkins’ connection to the domains to Mother Jones’ attention. Another researcher, who asked not to be named to avoid harassment from Watkins supporters, reviewed the historical domain and routing information at Mother Jones’ request and agreed the records showed that N.T. Technology “hosted many domains with CP [child pornography] themed names over an extended period of time.”

Using a combination of open-source and commercially available data, the researcher confirmed that the domains pointed to IP addresses registered to N.T. Technology, and that the IP addresses were routed to the company’s network while the explicit domains were active.

One domain created in 1998 and hosted by N.T. Technology, which bills itself as “a powerhouse in the internet world, [s]upporting some of the largest sites on Earth,” lists Watkins as its administrator and names a separate holding company he owns, Is It Wet Yet Inc., as the administration organization. According to historical domain and web archive records, the domain has, over the years, been associated with dozens of subdomains—more specific and focused offshoots of the main domain—whose names combine terms like “preteen,” “kidnap,” and “rape.” They include a comprehensive system of subdomains referencing age ranges as young as 10. When asked about the specific domain, Watkins said “I have really no idea about” it.

Fredrick Brennan founded 8chan, but turned over control of the imageboard to Watkins in 2015.* They later had a public split over the site’s direction. Brennan told Mother Jones that he would not be surprised if “Jim was involved in pedophile sites going back that far given his attitude towards the problem on 8chan,” explaining that Watkins “would always find something more important to do” when Brennan proposed deploying machine learning tools to block child sexual abuse material from the board. Watkins dismissed Brennan’s claims, saying that “what we do with machine learning is private.”

Though press reports documenting 8chan’s notorious and toxic environment noted that child pornography continued to be found there, in a phone call, Watkins said that 8chan “had a lot of problems” with child sexual abuse content when he acquired the site, but claimed it was removed under him as “it became one of the strictest websites on the internet.”

Watkins is listed as administrator of a domain with subdomains named for terms including “preteen,” “kidnap,” and “rape.”

When asked about a particular domain in the batch with a name suggesting it hosted child sex abuse material, Watkins claimed he had deleted it “15 to 20 years ago” when it came to his attention. He said the domains with names suggestive of child pornography had no content when hosted by his company, but had been established for domain squatting, a practice where the domains’ owners would profit once they found willing buyers for URLs referencing things like children’s underwear and the sexual abuse of minors. In a subsequent conversation, he suggested the subdomains were created as part of a common turn-of- the-century search engine optimization tactic.

Watkins claimed not to know the domain whose metadata showed it hosting child sex abuse-related filenames and links, and said that if the domain actually hosted such material the domain itself would have been removed. “If there was ever a problem we removed and deleted and reported,” he said. Watkins said that he did not vet clients nor take action to determine whether they used his services to commit illegal acts unless it was brought to his attention: “It’s about the most un-American thing I can imagine, sir. That’s what the Soviets would be doing, or the communist Chinese. And we don’t have Soviets anymore. We defeated them.”

QAnon’s sprawl and constant evolution can make it difficult to follow. It started with a poster on 4chan who claimed to be a member of the federal government with high-level “Q” security clearance. Posts from Q dropped cryptic breadcrumbs that purportedly shed light on a pedophile ring being run by liberal elites. The conspiracy, which holds that Donald Trump is secretly battling this cabal despite opposition from the so-called “deep state,” has found ardent supporters among the president’s base.

A former associate of Watkins says he would not be surprised if “Jim was involved in pedophile sites going back that far.”

Watkins’ precise role in QAnon is murky. At a minimum, he is widely recognized as having played an instrumental part in giving the movement a platform where it could flourish as he has publicly encouraged the conspiracy. When he was subpoenaed to testify before Congress, he wore a “Q” pin. Just weeks ago, he was a featured speaker at a QAnon conference in Phoenix. In addition to running QAnon’s home on 8kun, the fact-checking site Logically.ai reported this month that Watkins appears to be playing a role in facilitating online QAnon community hubs elsewhere.

Brennan, 8chan’s original founder, has suggested Watkins’ involvement goes deeper, positing he took advantage of his power as the owner of 8kun to essentially hijack the account that claims to be Q. Other researchers and journalists have raised the possibility that Watkins has some involvement or knowledge of who runs the account. Watkins has denied that claim, or having acted as Q.

Even if he has no direct relationship to the QAnon account, as an active supporter of Q and the movement’s host, Watkins is an inextricable sustainer of a conspiracy that has falsely branded political opponents and innocent bystanders as pedophiles—despite his own apparent role in profiting from words that appeal to the real thing.