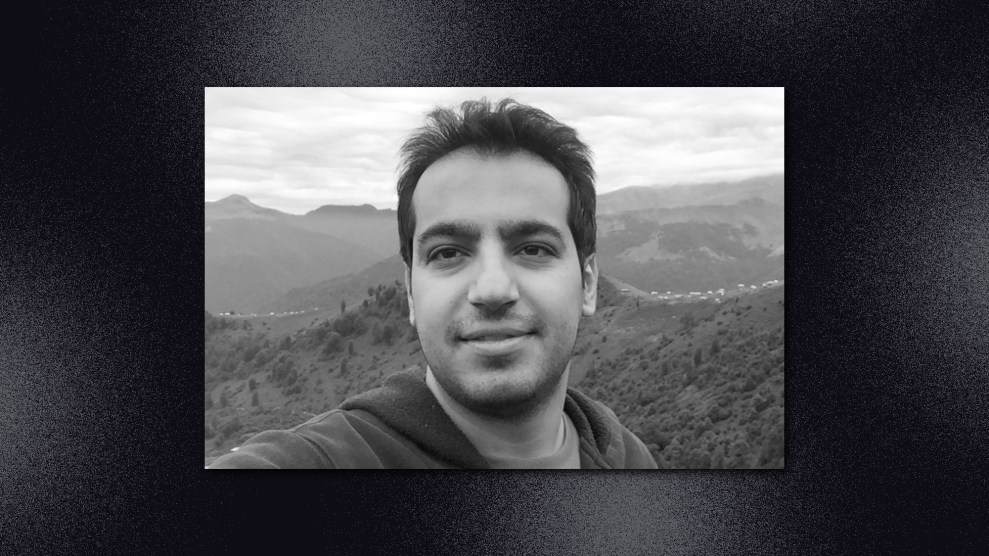 Following his campaign promise to bar Muslims from entering the country, President Trump enacted a travel ban one week after his inauguration. The policy was blocked in court, as was a second version. But in 2018, the Supreme Court upheld a third ban that restricts travel and immigration from six countries, including Iran.

In theory, the current ban allows for exceptions for people like Masoud Shameli, the son of Iranian immigrants living in Orange County, California. In practice, waivers have often proven impossible to obtain. Here’s Masoud’s father, Reza, and his older brother Ehsan.

From: Iran
Lives in: Isfahan, Iran

Reza Shameli and Ehsan Shameli as told to Noah Lanard

Reza: We’re from an ancient Iranian city called Isfahan. I worked for a bank for about 30 years until I retired. When my sons went abroad to study, they persuaded us to come here. God helped, and my wife and I were able to get our green cards through the diversity visa lottery. We’ve been married for 42 years. When you reach this age, the only thing that’s important to you is your children. Four of my five sons are here at the moment. The thing that makes us worry is that one of them is still in Iran.

Ehsan: My older brother, Amin, came to the US in 2003 to pursue his PhD in electrical engineering. I went to Canada for my PhD in mechanical engineering. Five years after me, my brother Ashkan came to Canada for his PhD in mechanical engineering as well. Masoud is one year younger than Ashkan. He graduated from his master’s program and started working in Iranian civil engineering. My youngest brother, Ali, came to the US with my parents when they came here via the visa lottery. He studied some English, then got into a PhD program in computer science and management. And now he’s been admitted to MIT for his postdoc.

Masoud lives in Isfahan. The situation is really bad because of the US sanctions. There’s a lot of industry in the suburbs—refineries, petrochemical plants—and it could become a target if there is a war with the United States.

All of the news about conflict with the United States creates a significant level of distress and anxiety, particularly for my parents. My dad has heart issues. He’s 75 years old, and they’re both kind of in a depression.

Reza: When they were kids about 35 years ago, we were at war with Iraq for eight years. Our house was hit two or three times. Buildings around us collapsed. We have very bad memories of those days.

Ehsan: I remember everything shattering. Part of the wall fell down. We all had to flee the city.

Reza: We always follow the news. We knew that politicians say things during the campaign, then do something different after they get elected. So I didn’t think that Trump was serious about the ban.

Ehsan: Masoud started the green card process in 2011. Because he’s in the queue for adult sons of US immigrants, it takes a long time. The election happened right when his turn came up. The travel ban was really bad timing. If the travel ban had happened three months later, Masoud would have been here for two years now.

Reza: When the travel ban happened, my wife and I got sick. Really sick. It was very stressful. We couldn’t sleep. It was devastating.

Ehsan: It got to the point where we had to take my parents to the doctor. My mom was so stressed that she collapsed a couple of times.

Reza: When I have trouble sleeping, I’m worrying about my children, about their fate, about their futures. Sometimes, I have to take a pill and walk around to be tired.

Ehsan: The idea that the travel ban was designed to stop terrorism has landed particularly hard on my parents. They can’t imagine that their son is being taken away by an accusation of terrorism. How could we be terrorists? We’ve been working in prominent companies in the US. I have many US patents. My brother has US patents. I was a professor at a university teaching US kids how to do engineering and physics.

When the ban happened, I remember thinking that if somebody in the government is violating the law, there is another branch of the government who stops it. You are in a country of laws, not a dictatorship. I remember my brothers and me telling our parents, “Don’t worry, we’re protected by the law. This court system is very fair. The government has to respond.” But you know the history.

We eventually had this family discussion about, what do we do? We hired a lawyer. Katie Porter, she’s a congresswoman in our area, we meet with her staff at least every few months. We wrote letters to the president’s office. Everything we could possibly do as citizens. We wrote a letter to Pompeo’s office. To no effect.

My parents can’t imagine that their son is being taken away by an accusation of terrorism. How could we be terrorists?

Reza: When you are in a situation like Masoud’s, you’re not on solid ground. You’re neither here nor there. He’s wanted to get married, but he could get a letter any time saying that he’s been approved. What can he do?

Ehsan: If Masoud gets married, then his case would become a different case. It would take much longer to process. So because of that, his life has been on hold.

Reza: Before the coronavirus hit, we used to go to Iran every year to see him. But because of COVID-19, it’s been more than two years since we’ve seen him. It’s the longest I’ve ever gone without seeing him. We communicate over video chat almost every day.

Ehsan: Normally, the plane tickets to visit him are about $1,400 per person. The last time that we all went as a big family it was me and my wife, my brother and his wife, and the other brothers, plus my two kids. You’re looking at like $11,000 just for tickets. Then there’s the cost of talking to lawyers. That’s not cheap in California.

The thing that’s very directly impacting our family is immigration policy. There are other issues like taxes, but 5 percent more or 5 percent less doesn’t change the way that we’re living. But the fact that one of our family members is directly separated from us because of this policy makes a huge difference for us. At least based on what you see on the news, it doesn’t seem that the immigration policies are going to get any better, or that this travel ban is going to get lifted, if Trump is reelected. It seems like he’s going to go even more in the direction he’s already gone.

I remember the day that Joe Biden said that he’d lift the travel ban on his first day in office. We were all texting it to each other. I think a lot of people are looking forward to that day. Not only us.