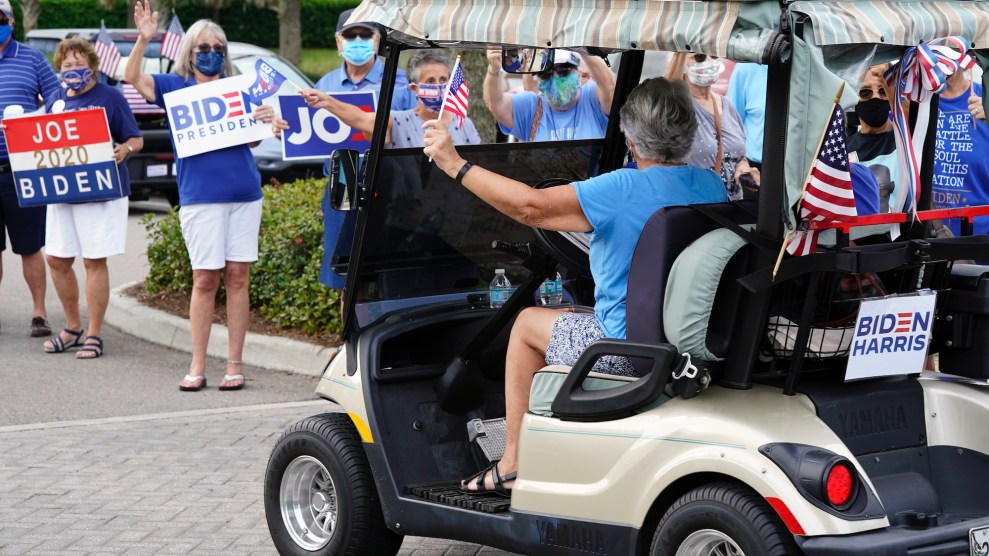 Supporters cheer and wave signs as voters arrive at the Sumter County Elections office drop off their ballots after taking part in a parade golf carts supporting Joe Biden on October 7, 2020, in The Villages, Florida.John Raoux/AP

Chris Stanley lives in the Villages, the sprawling retirement community in Central Florida that’s home to more than 115,000 of the nation’s over-55 set. At 56, she’s young by Villages standards. But as a veteran Democratic organizer who’s volunteered in every election since she was 18, she’s already found her way to the presidency of the Villages Democratic Club. She’s been putting in marathon phone banking shifts at the local party headquarters—“where I’m practically living these days,” she told me earlier this month—to remind people to return their mail-in ballots, the method many of her fellow seniors are relying on to vote safely during the pandemic. (In most places, including Florida, it’s now too late to mail back your mail-in ballot; instead, you should hand-deliver it, based on the rules in your state.)

Stanley doesn’t like the way President Trump has been talking about the election. She takes particular issue with his public efforts to urge the courts to shut down ballot-counting after Election Day. “So, my band of retirees and I are preparing to be useful,” she says.

“We’re hitting the streets, we’re going to talk to people, so they can’t pull the same stunt they did in 2000.”

By “useful,” she means staging a protest in the event that Trump follows through with those demands. In early October, Stanley invited Hardy Merriman, a scholar of civil resistance, to hold a virtual training for 150 of her fellow Villages Democratic Club members. Merriman walked them through the “Hold the Line” guide, a 55-page how-to that Merriman co-authored, offering guidance for what to do in the event that Trump and his allies try to steal the election. The guide also tackles how to remain nonviolent in the face of escalating political tensions, a crucial skill in the Villages, where geriatric citizens have leaned into some of the worst tendencies of Trump-era political discourse. One letter to the editor of the local paper catalogued threats to drive into people rallying on the sidewalk, keyed cars, and beer poured on the seat of a golf cart, the vehicle of choice in “Florida’s Friendliest Hometown.”

“I’m not saying we’re taking up bayonets,” Stanley adds to that end. But she does plan to act. “Otherwise,” she says, “that’s the end of American democracy. That’s it. It’s over.”

Stanley and her “band of retirees” are not alone in their concern for what could happen next week as the country awaits the outcome of the presidential election. Trump’s repeated statements undermining confidence in the results have been buttressed by the actions of Republican lawmakers and GOP-appointed judges running roughshod over the sanctity of electoral process. The Biden campaign has lawyered up to fight that battle in the courts, but the grassroots resistance that owes its renaissance to Trump’s 2016 victory has its own plans for that unwelcome outcome. These activists have spent the last four years protesting Trump at every turn: over his treatment of women, over the separation of immigrant families, and over his hostility toward racial justice movements. Now, they’re planning for a massive demonstration that they hope never comes to pass—one to defend the results of the election, while deescalating the violence they fear could accompany such an uprising.

The final weeks of the 2020 election have brought a particular strain of déjà vu for Stanley: the frustration she felt five presidential elections ago when the nation watched Florida election officials count the ballots in 2000. She tells me she had half a mind to leave her young child back home in North Carolina, where she was living at the time, and drive down to the Sunshine State to register her discontent. “Everyone was sitting back and waiting for votes to be counted!” Stanley says. “There was no reason to believe it would be done in a democratic manner whatsoever. I was so aggravated that there wasn’t mobilization on the ground.”

During those five uncertain weeks before the Supreme Court declared George W. Bush the victor, only the Republicans had managed to stage a meaningful protest: Hundreds of GOP operatives descended upon election canvassers in Miami-Dade County with the goal of shutting down the recount during the “Brooks Brothers Riot,” so named for the demonstrators’ starched-collar aesthetic. This year, she’s convinced she might finally get her own Florida recount moment, possibly one that revolves around GOP efforts to challenge mail-in ballots over technicalities. “It won’t be hanging chads this time,” she says, “but it’ll be signatures, dates, the sealing of envelopes, and outright fraud.” Hence, the Hold the Line training. “We’re hitting the streets, we’re going to talk to people, so they can’t pull the same stunt they did in 2000.”

Hold the Line was conceived by a group of veteran DC-based activists in late spring. They wondered if Trump, a proud eschewer of democratic norms, would commit to a peaceful transfer of power—and what he might do to protesters who challenged him. Then in June, the US Park Police fired tear gas at nonviolent demonstrators near the White House so Trump could cross the square for a photo-op at a nearby church. “That was another indicator of what we could be facing,” Ankur Asthana, one of Hold the Line’s co-founders, says. “It was really the galvanizing moment.”

The guide outlines three “red line” scenarios that, if crossed, should prompt activists to engage: Trump declares victory before the results are clear; the vote counts show signs of tampering; or Trump refuses to leave office after losing. It also imagines an attendant set of escalating dangers: Trump-aligned militias or white supremacists might try to instigate violence among peaceful protesters, or the police or military might be called in to suppress protests in a violent manner. The training then walks through how to prepare coordinated responses—strikes, boycotts, and, of course, protests—in an effort to shift the balance of power back toward democratic norms.

At first blush, the guide seems uniquely designed for the sort of DC-based clash that inspired its creation. And there will, of course, be a role for protesters in the nation’s capital. ShutDownDC, a direct action democracy group based in Washington, has a chain of events it will set in motion in the event of post-election chaos—and businesses in downtown DC have already begun refreshing the plywood barriers they placed over their windows during the racial justice uprisings this summer. But the point of Hold the Line is to encourage activists to make a plan to take action at local level that can ensure the national outcome is protected—to counter whatever the 2020 version of the Brooks Brothers Riot might be. “They’re the leaders amongst their own communities, and they know best how to hold the lines locally,” Kifah Shah, another Hold the Line co-founder, tells me. “It’s their efforts at those local levels that will cause a wave.”

This, too, is the sentiment behind Protect the Results, a mass mobilization initiative from the Indivisible Project and Stand Up America that encourages local organizers to commit to a protest for November 4. So far, more than 400 events in 45 states have been planned. Kierstyn Zolfo, a leader of an Indivisible group in Bucks County, Pennsylvania, tells me protesters will gather outside the county courthouse in response to any one of a number of ballot-counting disasters looming over the swing state—especially if it appears that mail-in ballots are being disregarded in an effort to hand the state to Trump.

Yurie Hong, who leads an Indivisible group outside the Twin Cities, is concerned about a recent ruling from a federal appeals court requiring that late-arriving mail-in ballots be separated from those that arrive on time—a move widely viewed as a precursor to throwing them out. “I think it’s very likely that protests will be triggered if President Trump seeks to declare only Election Day votes valid, especially if he seeks to do so extrajudicially,” Hong tells me.

Each of the various mobilization efforts stresses a nonviolent approach and de-escalation tactics in the event of clashes with Trump-aligned counter-protesters, a common side effect of civil disobedience in the Trump era. While high-profile cases of deadly political violence have garnered headlines, low-grade intimidation tactics have followed grassroots protesters everywhere. This has been particularly true in areas where Democratic engagement had been nearly nonexistent four years ago. The Villages hit a particular boiling point in June, when a man shouted “White Power” at anti-Trump protesters during a golf cart parade in honor of the president’s birthday.

“I am concerned about what people feel emboldened to do in the face of kind of mass citizen movements,” Hong tells me. She says her group was mocked and threatened by Trump supporters when they clashed at the president’s rally in Mankato, Minnesota, over the summer. Nothing dangerous happened then, she explains, but “I think tensions are much higher right now.” She worries that Trump might express a “legitimization or validation of violent groups” in the face of defeat. Bucks County’s Zolfo has a similar fear: She says her group encountered members of the far-right Proud Boys at a pro-impeachment demonstration last December. Nine months later, Trump publicly called on the Proud Boys to “stand back and stand by.”

Of course, one way to avoid mass protests and the potentially violent confrontations that might accompany them is for the presidential results to be decisive. The groups I spoke with about post-election organizing stressed that they are, first and foremost, pouring their energy into a final push to get out the vote. Sumter County, Florida, where most of the Villages is located, has been firmly red and will probably remain so, even though the seniors who pushed Trump over the finish line in 2016 are showing signs that they might to abandon him. On November 4, Stanley will come up for air and assess what comes next.