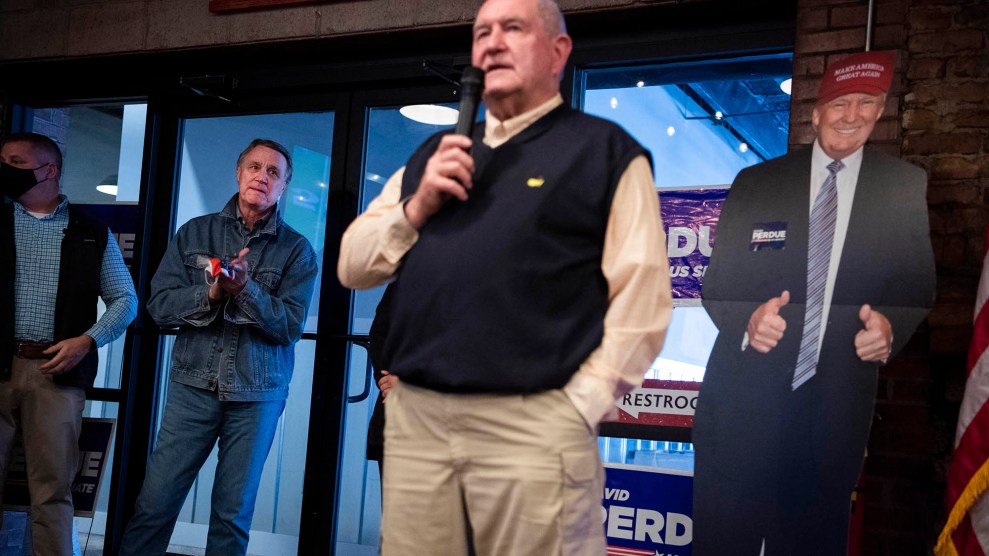 Before Donald Trump Jr. took the microphone to stump for his father in Cedar Rapids, Iowa, on Tuesday, the audience of Republican voters in this important swing state heard from a special guest: President Donald Trump’s Secretary of Agriculture, Sonny Perdue.

“I’ve been in Iowa for a few days,” Perdue said, “and lemme tell ya, Biden is running third behind Trump and ‘for sale’ signs.”

I don’t know about the signs, but Perdue has spent more than just a few days in Iowa. It was his third visit to the state in the last two months. And while no one doubts Iowa’s importance to agriculture, those visits fall into a pattern: Perdue has been showering attention on President Donald Trump’s most important re-election targets. This month he has visited Iowa (twice), Michigan, Pennsylvania, Georgia, Minnesota, and Wisconsin. In September, he stopped in Florida, Georgia, North Carolina (with Ivanka Trump), Nebraska’s second congressional district, and Iowa. In August, he was in Georgia, North Carolina (with Ivanka again—and the president), and Michigan. With the exception of his current trip, and Thursday’s campaign appearance with his cousin, Georgia Sen. David Perdue, all of those swing-state visits were considered official government business.

Perhaps no one in the cabinet has blurred his official duties with his political ones as much as Secretary of State Mike Pompeo, who has departed from a role that has traditionally been more, well, diplomatic in order to advance not just the president’s ambitions but perhaps his own.

But Perdue’s schedule is the norm among top officials in Trump’s government right now. As the president uses government resources for personal and political means to an unprecedented degree—it was the attempt to coerce a foreign government to smear Joe Biden that led to his impeachment—his subordinates have deployed to battleground states for photo-ops, placed op-eds, made media hits, and crafted videos sometimes indistinguishable from campaign material.

“To a certain extent there is an advantage of incumbency,” says Jordan Libowitz, a spokesperson for Citizens for Responsibility and Ethics in Washington, a watchdog group that has lodged Hatch Act complaints against a number of Trump White House officials. “What we’re seeing from this administration goes a bit further, in that there’s this blurring of the political with the actual running of the government.” CREW filed a complaint against Perdue after a North Carolina visit in which he told farmers they would continue receiving support, “If America gets out and votes for this man, Donald J. Trump.” In October, Perdue was ordered to reimburse the government for the cost of the event.

Perhaps no one in the cabinet has blurred his official duties with his political ones as much as Secretary of State Mike Pompeo, who has departed from a role that has traditionally been more, well, diplomatic in order to advance not just the president’s ambitions but perhaps his own.

In January, Pompeo visited The Villages, the sprawling Florida retirement community that’s crucial to Trump’s re-election plan, and asked voters at the Sumter County Fairgrounds, “Is anybody tired of winning yet?”

In July, he delivered a highly political speech at the National Constitution Center in Philadelphia (that’s in Pennsylvania, in case you forgot) attacking “rioters pulling down statues,” criticizing the media, and condemning the New York Times’ “1619 Project,” which emphasized the centrality of slavery to the American story. The next day he was in Iowa, where he met with the Iowa Farm Bureau to discuss trade policies and spoke to social conservative leaders about his faith. In September, he went to Texas (to speak at a church in suburban Plano) and Wisconsin (where he blamed China for the coronavirus in an address to Republican state legislators). He video-conferenced into a social conservative gathering in Florida, and in perhaps his biggest coup, addressed the Republican National Convention from Jerusalem.

On Tuesday, CNN reported that the Office of the Special Counsel was investigating whether Pompeo’s RNC speech had violated the Hatch Act. But the White House has taken a dismissive attitude toward that law. “Let me know when the jail sentence starts,” then-White House advisor Kellyanne Conway said last spring after criticizing Biden from the White House lawn. When White House chief of staff Mark Meadows was asked about possible Hatch Act violations at the RNC, he said “nobody outside the Beltway really cares.”

Pompeo’s media blitz is even less subtle than his travel schedule. On October 15, to pick just one date, he called into talk radio shows in Phoenix (where he discussed releasing new Hillary Clinton emails), Detroit (where he talked up trade deals that work for “Wisconsin and Michigan and Pennsylvania”), Orlando (Clinton emails again), and Atlanta.

Acting Homeland Security Secretary Chad Wolf held a press conference in Philadelphia in October to celebrate the detention of 170 undocumented immigrations by the Immigration and Customs Enforcement Agency—even though very few of those apprehensions actually took place in Pennsylvania. Wolf was in Arizona earlier this month. The week before that, he was in Michigan and Wisconsin. (CREW filed a Hatch Act complaint against Wolf after he participated in a naturalization ceremony at the White House as part of the Republican National Convention.) In September, ICE held a press conference in North Carolina to attack local authorities for sanctuary-city policies. On Wednesday, ICE held a press conference in Minnesota, one of Trump’s targets. The agency has put up billboards in Pennsylvania—and only Pennsylvania—with mug shots of undocumented immigrants who are wanted for crimes.

Interior Secretary David Bernhardt took some heat on Tuesday when he promoted a one-minute campaign-style video highlighting the president’s accomplishments, but it was hardly a one-time thing. Last week, he was in Nevada and in Arizona, where he held a press conference touting Trump’s efforts on “securing our border” and announced a major drug bust. Before that he was in Ohio. He paid a visit to a Colorado construction project to praise the “forceful advocacy” of Sen. Cory Gardner, one of the most endangered Republicans in the Senate. He’s visited Florida, North Carolina, and Wisconsin.

Energy Secretary Dan Brouillette has visited Pennsylvania four times since August to promote fracking—which is at the heart of Trump’s anti-Biden messaging in the state. (An October visit to Ohio was cancelled after staffers tested positive for Coronavirus.) He visited Wisconsin in October, Michigan in September, and North Carolina in August.

EPA chief Andrew Wheeler made trips to Pennsylvania in June, August, and October; went to Wisconsin in June and August; toured Michigan and Minnesota in September; and Ohio in October. This week he’s in Florida for the second time in as many weeks, as well as Georgia.

What about Education Secretary Betsy DeVos? Glad you asked. In the closing stretch of the election she traveled to North Carolina (twice), Iowa, Michigan, Texas, Arizona, and Wisconsin’s crucial Waukesha County. In September, she was in Pennsylvania and Michigan. She visited Georgia at the end of August.

Maybe you’ve noticed a trend! It’s not a recent one, either. As my colleague Rebecca Leber has noted, it was happening in the spring and summer too.

There is plenty of official business to take care of in all of these states, of course, and these officials have a lot of latitude on how they do it. (Perdue’s North Carolina trip, ostensibly to promote the Farmers to Families Food Box program, would have been perfectly legal if he hadn’t called for “four more years” during it—a slip-up he acknowledged when asked about the campaign on a subsequent trip.) Some justification can be made for almost all of these visits and media appearances.

A Department of Agriculture spokesperson noted that Perdue “has traveled to all 50 states at least once” and “believes the best way to hear the concerns of America’s farmers and ranchers is to get out of Washington, DC and listen to them directly.” A State Department spokesperson explained that “communicating our mission directly to the American people is one of the most important ways of strengthening it, and Secretary Pompeo continues to deliver on this essential priority.” In response to a request for comment, Interior Department spokesperson Ben Goldey said that “Elected officials—of both political parties—have been invited to participate in various aspects of the Secretary’s visits to states that these individuals represent,” and he noted that in recent months Bernhardt met with Colorado Democratic Sen. Michael Bennet and Utah Democratic Rep. Ben McAdams (a top Republican target) on their home turf.

“All travel has been on official business pertaining to agency priorities including cleaning up the Great Lakes, meeting with Puerto Rican stakeholders to discuss recovery efforts, curbing food waste, promoting water infrastructure, touring Superfund sites, and hearing from farmers directly on conservation efforts,” said EPA spokesperson James Hewitt, who noted that Wheeler has also visited three states that aren’t likely to be competitive—California, Wyoming, and Virginia. “We of course keep the White House apprised of our travels.”

But it sure is a pretty big coincidence that such a wide range of government agencies seem to be concentrating their attention on such a small collection of states at this particular moment in time.