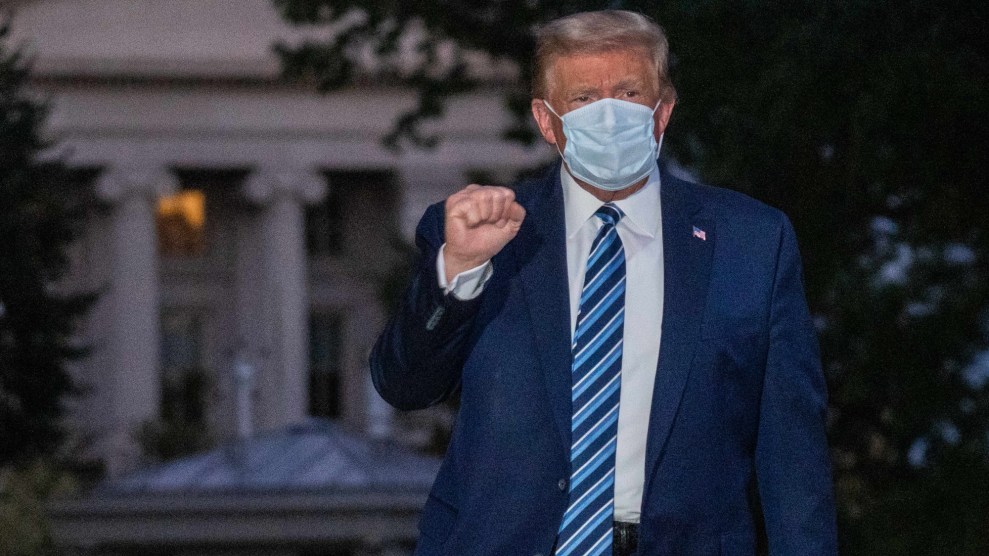 Less than a month before the election, President Donald Trump is pinning his hopes to yet another wild conspiracy theory. With the help of congressional Republicans, right-wing media, and his top intelligence official, Trump is falsely claiming that Hillary Clinton and her fellow Democrats fabricated the entire Trump-Russia scandal in 2016.

They went for a Coup. Almost destroyed our Country. You had the right President at the right moment. Current Voters, REMEMBER THIS WHEN YOU VOTE! https://t.co/w2s8LdiRu0

Not surprisingly, this claim is inaccurate, incoherent Fox News fodder that is unlikely to sway anyone not already deep in Trump’s camp. But importantly, it is being advanced through selective and misleading declassification by Trump’s pliant director of national intelligence, John Ratcliffe. And Trump seemed to cite it on Wednesday to assert that he is now “ENTITLED TO ASK THE VOTERS FOR FOUR MORE YEARS.” Who knows if he’s kidding?

Here’s what happened: Acting on orders from Trump, Ratcliffe on Tuesday declassified notes from former CIA Director John Brennan indicating that on July 28, 2016, Brennan had told President Barack Obama about US intelligence findings related to Russia. These finding included information suggesting that Russian intelligence analysis said that Hillary Clinton had approved “a proposal from one of her foreign policy advisers to vilify Donald Trump by stirring up a scandal claiming interference by the Russian security service.” This same intelligence was apparently the basis of documents declassified by Ratcliffe last week that describe Russian claims that Clinton’s campaign wanted to highlight Trump’s Russian ties as “a means of distracting the public from her use of a private email server.” Ratcliffe said the Russian claims may “reflect exaggeration or fabrication,” but he released them anyway.

These releases by the director of national intelligence have enabled Trump and co. to make a claims that, though they are false, have the virtue of simplicity. “They knew Crooked Hillary cooked up the Russia hoax the whole time,” the Trump campaign tweeted Tuesday.

The big problem with these assertions is that Russia—according to the unanimous conclusion of US intelligence community and a bipartisan Senate investigation—did indeed interfere in the 2016 election to help Trump. The Kremlin did so by hacking and then releasing sensitive Democratic emails, by social media manipulation, and through other efforts. The 2016 Trump campaign had extensive contacts with Russians and “expected it would benefit electorally from information stolen and released through Russian efforts,” special counsel Robert Mueller found. Mueller’s team said it “did not establish that members of the Trump Campaign conspired or coordinated with the Russian government,” but Trump publicly encouraged Moscow to hack Clinton’s emails. And Donald Trump Jr., Jared Kushner, and Paul Manafort secretly met with a Russian lawyer who, they had been told, would provide them with dirt on Clinton as “part of Russia and its government’s support for Mr. Trump.”

If Hillary Clinton had really decided to concoct a scandal about Trump and Russia to distract from her emails, how fortunate she was to happen upon an allegation that proved correct. What are the odds?

But of course, Clinton did not invent Trump’s ties to Russia. They were already public knowledge by the time Brennan briefed Obama—and probably by the time Russian spies speculated that Clinton would raise the matter, though the date of that “analysis” is not clear. On June 14, 2016, the Washington Post reported that “Russian government hackers penetrated the computer network of the Democratic National Committee.” The Russians passed stolen Democratic emails to WikiLeaks, which made them public in July. The hacked emails—which showed DNC staffers favoring Clinton over Bernie Sanders—led to the resignation of DNC chair Debbie Wasserman Schultz and disrupted the Democratic convention.

The Russian hackers reportedly gained access to the DNC’s opposition research on Trump. But they didn’t need it to know that Clinton would make an issue of Russian support for his campaign. Clinton and her team did that publicly. For his part, Trump refused to publicly acknowledge that Russia was behind the DNC hack, helping to cover for the Kremlin. Still, when asked at a July 27, 2016, campaign event why he didn’t tell Russian President Vladimir Putin to stay out of the US election, Trump famously invited more Russian hacking. “Russia, if you’re listening, I hope you’re able to find the 30,000 emails that are missing,” Trump said, referring to emails from Clinton’s tenure as secretary of State that she allegedly deleted. Trump has claimed he was joking, but Mueller reported that within hours of Trump’s remark, Russian hackers redoubled spear-phishing attacks aimed at hacking Democratic emails.

Notably, Trump today is promoting four-year-old Russian speculation that may have been deliberate misinformation. And he is pretending it was US intelligence, not unidentified Russians, that said Clinton planned to play up Trump’s ties to Russia. In fact, Brennan says he was outlining US intelligence on what Russians were saying. “I briefed President Obama and the rest of the national security council team about what the Russians were up to and I was giving examples of the type of access that the US intelligence community had to Russian information and what the Russians were talking about and alleging,” Brennan told CNN Tuesday. Ratcliffe acknowledged much the same thing last week, describing the claims as “Russian intelligence analysis” and noting that the US intelligence community “does not know the accuracy of this allegation or the extent to which the Russian intelligence analysis may reflect exaggeration or fabrication.”

Brennan told CNN that Ratcliffe is selectively declassifying information “to advance the political interests of Donald Trump and Republicans who are aligned with him.”

Because Ratcliffe has declassified select information while leaving much secret, Brennan and congressional Democrats have limited ability to rebut Trump’s claims. But Democratic aides privately say the claims Ratcliffe is pushing were dismissed years ago by US intelligence agencies as inaccurate or deliberate misinformation. Rep. Devin Nunes (R-Calif.)—who is the top-ranking Republican on the House Intelligence Committee and requested that Ratcliffe share the Russian claims—has had the intelligence for four years, a committee aide said. A Nunes spokesperson did not respond to a request for comment.

Meanwhile, Politico reported Tuesday that the “Russians’ assessment of Clinton was only one part of a larger intelligence report that was billed as an initial examination of Russian cyberattacks targeting the 2016 election.” That suggests that Brennan’s description of the baseless Russian allegations was part of a broader US intelligence finding that the Russia was, in fact, interfering in the US election. And the Russians, who still deny hacking Democratic emails, had ample reason in 2016 to try to distract from a crime they were in the middle of committing.

No one needed multiple spy agencies to figure out in the summer of 2016 that Hillary Clinton would try to make an issue of the Trump campaign’s enthusiastic acceptance of Russia’s help. But Trump and his supporters would like Americans to believe that Obama relied on the CIA spying on Russians to learn that Clinton might mention that topic on the stump. That is nonsensical bullshit.

As voters focus on Trump’s mishandling of an epidemic that has killed more than 210,000 people in the United States and has sickened 7 million, including the president himself, few outside the Fox News bubble are likely to care about more presidential tweets about Hillary. But it is worth noting that Trump, Ratcliffe, and congressional Republicans are attempting a perhaps unprecedented politicization of US intelligence. Four years after Trump helped Russia mess with a presidential election, by denying their meddling even as he worked to capitalize on it, he is trying his best to do it again.