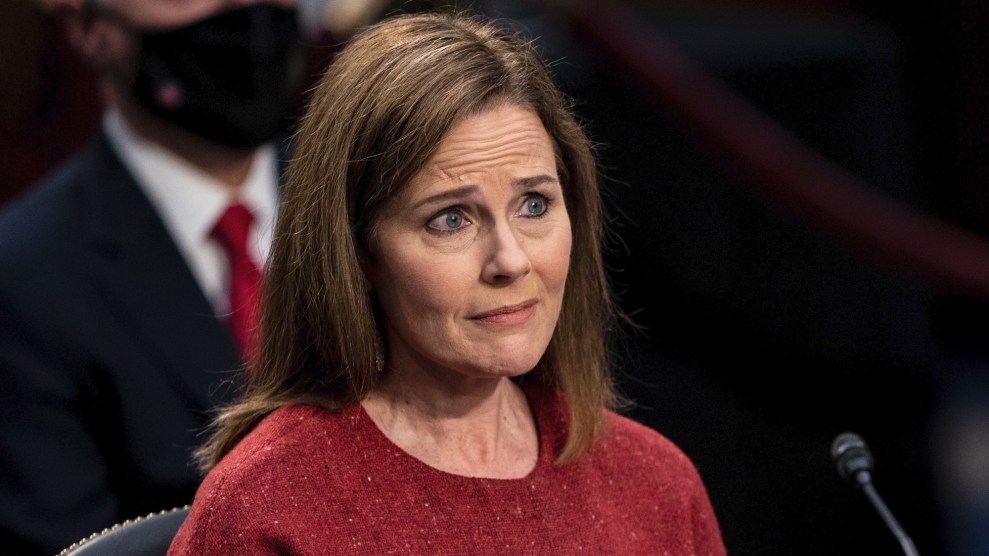 In a back-and-forth during Senate confirmation hearings today, Sen. Dianne Feinstein (D-Calif.) pressed Amy Coney Barrett, President Donald Trump’s nominee to replace Justice Ruth Bader Ginsburg on the Supreme Court, about her views on abortion. Barrett insisted that she’s entering the confirmation process with “no agenda” but to serve her country and the law.

With the passing of the liberal standard-bearer Justice Ginsburg, Barrett’s nomination has heightened fears that the right to an abortion could be jeopardized. There are special concern concerning the landmark decisions of Roe v. Wade in 1973, which first established the legal right to abortion, and Planned Parenthood v. Casey from 1992, which went one step further to say no law can place “undue burden” on that right. The precise meaning of “undue burden” continues to be argued about in the courts.

“I think in an area where precedent has been pressed and litigated, as is true of Casey, it would actually be wrong and a violation of the cannons for me to [grade precedent] as a sitting judge,” she said. “So if I express a view on a precedent one way or another, whether I say I love it or I hate it, it signals to litigants that I might tilt one way or another in a pending case.”

And yet, in many ways, her views on abortion law are already known.

Back in 2006, Barrett and her husband, both ardent Catholics, signed a two-page newspaper ad that ran in The South Bend Tribune, which described the Roe v. Wade decision as “an exercise of raw judicial power” and called for “an end to the barbaric legacy” established therein. As recently as last Friday, a second “right to life” ad, which is not dated but refers to the 40th anniversary of Roe v. Wade, urging people “to renew our call for the unborn to be protected in law” appeared in a supplemental filing disclosed by the Senate Judiciary Committee. The ad was signed by University of Notre Dame faculty and staff, including Barrett. According to the Associated Press, Barrett said her name was included as a member of the university’s “Faculty for Life” group, which sponsored the advertisement.

But that isn’t all. In 2013, she gave two talks—a lecture and a seminar—at Notre Dame hosted by anti-abortion student groups, according to CNN. Her lecture, entitled, “The Supreme Court’s Abortion Jurisprudence,” was advertised in a faculty newsletter as examining, “Roe v. Wade and the cases that followed it, concluding with a look at the cases that are currently being litigated in the lower courts.” The precise content of the talks are not known. Still, given all her previous work, the presence of “an agenda” may be difficult to ignore.