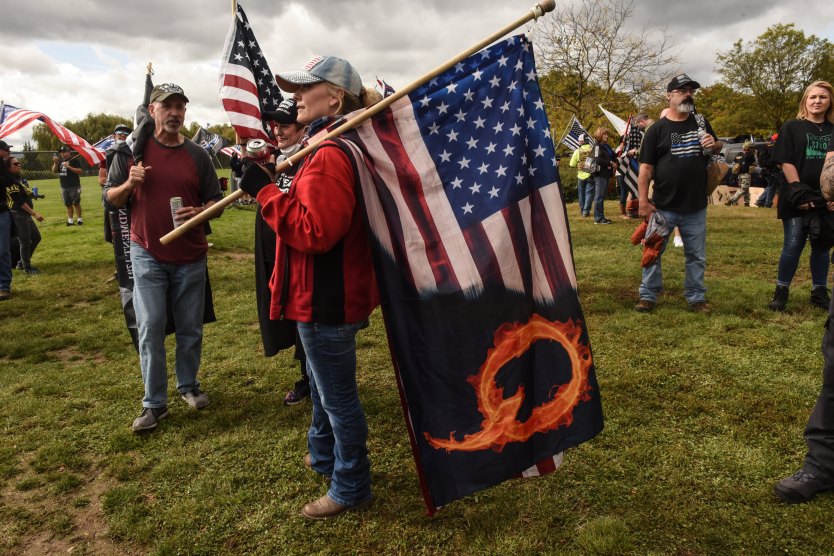 Seventeen Republicans and an independent libertarian voted on Friday against a resolution to condemn QAnon—the outlandish conspiracy theory that claims a cabal of liberal elite pedophiles is running a child sex trafficking ring and is locked in a battle with President Donald Trump, who is trying to stop them.

This is a new escalation in congressional Republicans’ flirtation with QAnon. The vote comes as an increasing amount of QAnon-supporting congressional candidates have run in and even won primary races around the country. Most have little-to-no shot at winning in November, though Marjorie Taylor Greene, a Republican running for a House seat in Georgia, has a likely shot of winning her race, and Lauren Boebert, a Republican running in Colorado for a House seat, has a shot at winning hers as well. The possibility of their electoral victories has put House Republicans in something of a bind: Some rank-and-file members don’t want to associate with QAnon, but House Majority Leader Kevin McCarthy has welcomed Boebert to its “Young Guns” fundraising and training program. And while McCarthy remained neutral in Greene’s race, he said that he had a “good and productive” relationship with her. President Trump has also recently declined to disavow QAnon and its followers when asked about it by reporters.

House Dems upped the pressure on their GOP counterparts when they introduced a resolution “[c]ondemning QAnon and rejecting the conspiracy theories it promotes.” The resolution acknowledges the danger the conspiracy movement poses and also encourages, but does not force, the FBI and intelligence community to strengthen their focus on mitigating QAnon-related threats. In the past three years since its founding, some QAnon supporters have plotted to carry out acts of violence and have committed at least one murder.

All Democrats voted for the resolution on Friday and Republicans overwhelmingly did, too. But still, a somewhat shocking 18 members of the House apparently have an issue with criticizing QAnon via congressional resolution.

It’s unclear exactly why. Mother Jones reached out to all 18 of these members after the vote and most didn’t return a request for comment. Three did, though: Reps. Justin Amash (I-Mich.), Jodey Arrington (R-Texas), and Drew Ferguson (R-Ga.). They all defended their vote out of concern for violating the First Amendment.

“There is a world of difference between conspiracy and criminal – one is protected by the First Amendment; the other should be condemned in all forms,” Arrington said, in an emailed statement provided by his office. He also criticized Democrats for not going after antifa and “radical leftist groups” instead of QAnon. (Nevermind that the centrist think-tank Center for Strategic and International Studies found that anti-fascists have been linked to no murders in the last 25 years, while right-wing extremists have killed over 300.)

In response to our query, Amash’s office directed us to a tweet from the libertarian congressman, in which he made a similar free speech argument:

The resolution threatens protected speech (absurd as that speech may be), and its prescriptions for addressing QAnon aren’t appropriate for what we know about them & may make things worse. These are conspiracy theorists who believe in a deep state that’s fighting against them,… https://t.co/POPukpQ5YM

Ferguson similarly said as much in an emailed statement: “Congressman Ferguson is not a supporter of QAnon. He in no way intended to lend credibility to conspiracy theorists or their outlandish ideas. He does, however, support the First Amendment and its protection of free speech.”

It’s unclear how a non-binding resolution that encourages other agencies to act within their own jurisdictions would supersede or threaten a Constitutional amendment. The lawmakers who voted on First Amendment grounds did not offer further explanation.

It’s worth noting that one of the congressmen who voted in favor of the resolution, Rep. Buddy Carter (R-Ga.), later backtracked his vote. On Twitter, he wrote that he “unintentionally voted” against the resolution. “In the interest of transparency, my intended vote was ‘aye’ and that will be reflected in the record,” he said. In a statement to Mother Jones, Carter clarified what happened: “I have made my position on QAnon very clear. This was an honest mistake and an unintentional vote on a non-binding resolution while I was distracted advocating for additional relief for small businesses and working families. I have already submitted a clarification, and my intended ‘aye’ vote will be reflected in the record.”

It’s not the first time Carter has “unintentionally” aligned himself with QAnon. In early August, Carter attended a “Save the Children” rally and march in Savannah that was organized by QAnon supporters. When he was criticized for attending the rally, Carter claimed that he didn’t know it was organized by supporters of the group and attended to show solidarity against human trafficking. “Congressman Carter was invited by a constituent who shares his strong stance against human trafficking, especially the trafficking of children,” a spokesperson for Carter told the Atlanta Journal-Constitution at the time. “Rep. Carter had no knowledge of any QAnon ties to the event, his attendance had absolutely nothing to do with QAnon, and Rep. Carter is in no way affiliated with QAnon.”

Here’s a full list of who voted against the resolution: