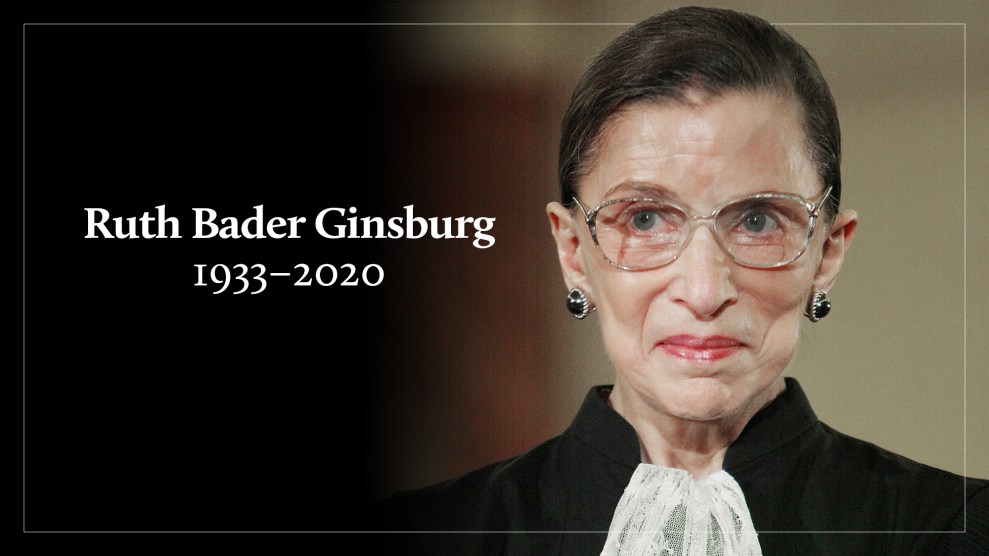 If Trump succeeds in filling Ginsburg’s seat with a justice in the mold of his two other appointees to the court, Neil Gorsuch and Brett Kavanaugh, it will be the court’s most extreme ideological shift since President George H.W. Bush nominated Clarence Thomas to replace legendary civil rights lawyer Thurgood Marshall in 1991.

Ginsburg, who was 87, had recently dictated a statement to her granddaughter. “My most fervent wish is that I will not be replaced until a new president is installed.”

Adam Feldman, who runs the Empirical SCOTUS blog, wrote recently that Ginsburg’s departure could be the left’s “biggest loss yet.” He pointed to some of the recent liberal victories on the court that would presumably have gone the other way if Ginsburg had been replaced with a conservative. Those cases include the affirmative action decision in Fisher v. University of Texas; Obergefell v. Hodges, which legalized same-sex marriage; National Federation of Independent Business v. Sebelius, which upheld most of Obamacare; and Women’s Health v. Hellerstedt, which struck down restrictive abortion laws in Texas.

For this reason, the confirmation fight over Ginsburg’s replacement promises to be every bit as brutal as that of Kavanaugh, whose nomination was marred by allegations that he had sexually assaulted a woman in high school. The fact that it will take place during a pandemic in the middle of a presidential election promises to make the fight an ugly one, especially given that Senate Republicans prevented President Barack Obama from confirming a nominee to the court to replace the late Justice Antonin Scalia in 2016.

Court-watchers have speculated that Trump may try to appoint a woman as his third high-court nominee to avoid any risk of another #MeToo moment in a confirmation hearing. At the top of the list is 48-year old Amy Coney Barrett, whom Trump appointed to the 7th Circuit Court of Appeals in 2017. Barrett had spent the previous 15 years as a law professor at Notre Dame, her alma mater, after clerking for Supreme Court Justice Antonin Scalia and working for a couple of years in a corporate law firm.

Barrett couldn’t be more different from the woman she might replace. She is popular with evangelicals and conservative Christians because she’s a devout Catholic with seven children, two who were adopted from Haiti. She is viewed as staunchly anti-abortion, thanks to her association with Faculty for Life at Notre Dame and her opposition to the birth-control coverage mandated in the Affordable Care Act, which she called “a grave infringement on religious liberty.” Barrett is also affiliated with a charismatic Christian group called People of Praise, in which female members were until recently assigned personal advisers called “handmaids.” Members of the group swear a lifelong loyalty oath to each other and donate 5 percent of their income to the group, which teaches that men have authority over the family, including their wives. They believe in prophecy, divine healing, and speaking in tongues, practices that could make for an interesting confirmation hearing. (Barrett did not disclose her membership in People of Praise before her 7th Circuit confirmation.)

Other potential replacements for Ginsburg include Britt Grant, a former clerk to Kavanaugh on the DC Circuit Court of Appeals whom Trump nominated to the 11th Circuit Court of Appeals last year; Third Circuit Judge Thomas Hardiman, whom Trump considered as a replacement for Scalia in 2017; and Neomi Rao, who ran the Trump administration’s deregulatory efforts as administrator of the Office of Information and Regulatory Affairs and was confirmed to Kavanaugh’s old DC Circuit seat in March 2019.

The White House has reportedly been preparing for Ginsburg’s departure for more than a year, as her health appeared to be faltering. In early November 2018, the 87-year-old justice fell in her office and broke three ribs. While Ginsburg was being treated for the broken ribs, doctors discovered two cancerous growths in her left lung.

Just before Christmas that year, the justice underwent surgery to remove the nodules and was declared cancer-free not long afterward. But the surgery seems to have been harder on Ginsberg than in her previous brushes with cancer. Ginsburg had had both colon cancer and pancreatic cancer, and she had never missed a day on the bench. But the lung cancer surgery kept her off the bench for the first week of oral arguments in 2019, for the first time in her 25 years on the court. In July, after being admitted to the hospital for an infection, Ginsburg announced that she had been undergoing chemotherapy to treat lesions on her liver that were detected in February.

Born in 1933 in New York City, Ginsburg was the second woman to ever serve on the Supreme Court. President Bill Clinton nominated her for the job in 1993. Although the Senate ultimately confirmed her on a 96-3 vote, her nomination wasn’t always a given. According to a recent biography by Jane Sherron De Hart, Ginsburg’s nomination required a sustained campaign organized by her late husband Martin Ginsburg, who fought to overcome the perception among feminists that Ginsburg might be too conservative. Her image as the feisty women’s rights lawyer working for the ACLU had shifted after President Jimmy Carter nominated her to the DC Circuit in 1980. She served on that court for 13 years, where she befriended Scalia and also Judge Robert Bork, the conservative lawyer famous for having his Supreme Court nomination rejected in 1987. Ginsburg’s record as an appeals court judge was far more restrained than her work as an advocate.

Once on the Supreme Court, however, she didn’t disappoint feminists. Just three years after her appointment, she wrote the majority opinion in United States v. Virginia, in which the court held that the male-only admissions policy at the Virginia Military Institute violated the Constitution’s Equal Protection Clause. The decision also rejected a proposal by Virginia to create a separate but equal women’s military institution as a substitute for admitting women to VMI.

Despite writing nearly 200 opinions during her tenure on the court, Ginsburg leaves behind few such landmark majority opinions. That’s because she spent virtually all of her career as part of the court’s liberal minority.

One of her most notable dissents came in the 2007 case Ledbetter v. Goodyear Tire & Rubber Co., a case in which the court ruled against Lilly Ledbetter, a woman who discovered as she neared retirement that over the 19 years of her career, she’d been paid far less than her male counterparts. Once she discovered the discrepancy, Ledbetter filed an equal pay lawsuit but the court ruled against her, saying Ledbetter should have brought the lawsuit within 180 days of her first discriminatory paycheck, even though she had no idea at the time she was being shortchanged. The 5-4 decision came at a time when Ginsburg was the only woman on the high court, and she was furious about the outcome.

In her dissent, which she read from the bench, Ginsburg fumed, “The Court does not comprehend or is indifferent to the insidious way in which women can be victims of pay discrimination.” She called on Congress to pass legislation to make it easier for women to bring lawsuits over pay discrimination, which it did. The Lilly Ledbetter Fair Pay Act was the first piece of legislation signed into law by President Barack Obama in 2009.

After the court shifted farther to the right with the appointments of Justice Samuel Alito and Chief Justice John Roberts Jr., Ginsburg was seen as the voice of the resistance to conservative efforts to roll back reproductive rights, civil rights, and women’s rights. But it wasn’t a place she always enjoyed. In 2005, after the retirement of Justice Sandra Day O’Connor, she became the court’s only woman, a four-year stretch she has said was “lonely.” She told NPR’s Nina Totenberg in 2014, “No one wants to be a one-at-a-time curiosity, and that’s what I was. I was the only one. It wasn’t the way the court should be at this time in our history.” In the same interview, Ginsburg also said that people frequently asked her how many women on the Supreme Court would be “enough.” She famously replied, “When there are nine.” Such comments helped fuel her status as a cultural icon as the Notorious RBG. Towards the end of her tenure, she became the subject of a documentary and a feature film and a wide array of merchandise—from water bottles to “dissent collar” pins to action figures to a LEGO figure minifigure that appeared in “LEGO Movie 2” in 2019.

Ginsburg’s political affiliation became more controversial in the summer of 2016, when she publicly criticized Donald Trump, who was then the presumptive GOP presidential nominee. She told CNN’s Joan Biskupic that Trump was a “faker” and that “He has no consistency about him. He says whatever comes into his head at the moment. He really has an ego. … How has he gotten away with not turning over his tax returns? The press seems to be very gentle with him on that.” Her comments created a small scandal, particularly among conservatives. Trump called on Ginsburg to resign, and she ended up issuing a statement calling her criticism of Trump “ill-advised” and promising to be “more circumspect” in the future.

Some Democrats had urged Ginsburg to retire in 2013, during the administration of President Barack Obama, fearing that Republicans would take control of the Senate and Obama would be unable to get any more nominees confirmed, and eventually a Republican president would end up naming her replacement. But Ginsburg, who believed that her friend Justice Sandra Day O’Connor had retired too soon, said she would continue to do the job as long as she was able to do it “full steam,” a statement she repeated after her fall in December 2018 and again in July when she revealed that her cancer had returned.