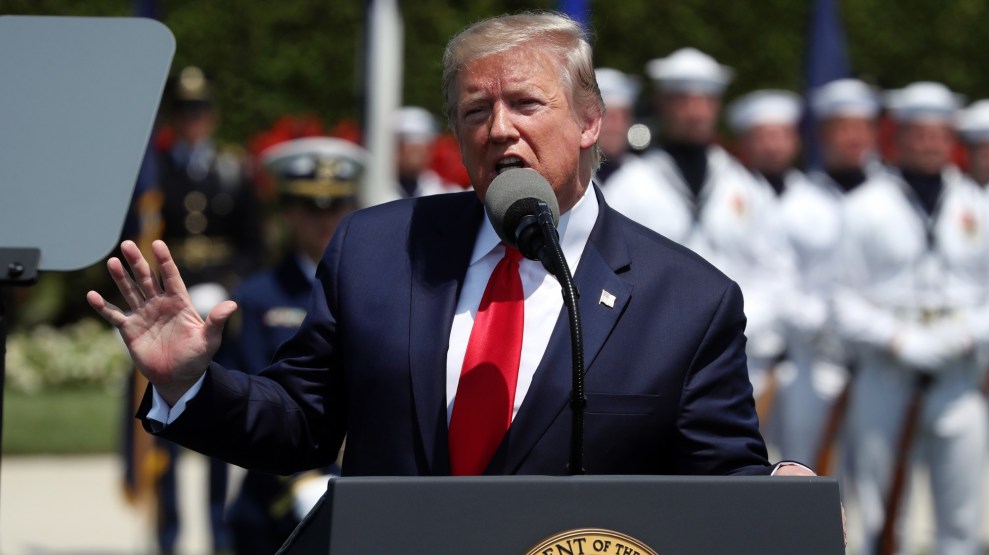 On Monday, President Trump delivered one of his most baffling lines yet at a White House news conference. Asked again about the Atlantic story detailing his disparagement of wounded veterans and soldiers who died in war, Trump said the “top people” in the military “probably” don’t love him “because they want to do nothing but fight wars so all of those wonderful companies that make the bombs and make the planes and make everything else stay happy.”

The idea that special interests hold too much sway at the Pentagon and ultimately benefit from its outsized budget is not a new one. Elizabeth Warren made pretty much the same argument in 2018 when she said, “It’s clear that the Pentagon is captured by the so-called ‘Big Five’ defense contractors-and taxpayers are picking up the bill.” But it’s confusing to hear Trump express that idea given his past actions regarding the Pentagon. Under Trump, the defense budget has risen for three straight years, an achievement he once was so proud of that he repeatedly exaggerated its scale and impact.

Two months after taking office, he told a joint session of Congress that he planned to propose a budget “that calls for one of the largest increases in national defense spending in American history.” His resulting proposal did “not appear to be a significant departure from the Obama defense budget,” per the Center for Strategic and International Studies’ budget guru Todd Harrison, and if enacted, would have only been the “ninth-largest increase in the past four decades.” Even Congress, which was controlled at the time by Republicans, thought Trump could do better and ended up appropriating $37 billion more than Trump requested for general Pentagon operations “and another $60 billion for war operations overseas in Iraq, Syria, Afghanistan and elsewhere,” the New York Times reported.

Trump’s budget proposals in 2018 and 2019 similarly raised defense spending, but not by nearly as much as Trump claimed in speeches on the campaign trail or in front of US service members. His repeated claim that he invested $2 trillion to burnish a “totally depleted” fighting force has been debunked over and over again.

But it’s not just the Pentagon’s budget; Trump has gone out of his way to boost defense companies directly. After the journalist Jamal Khashoggi was brutally murdered by agents of Prince Mohammed bin Salman of Saudi Arabia, Trump defended the Saudi dictator by noting that the kingdom had committed to spend $110 billion on “military equipment from Boeing, Lockheed Martin, Raytheon and many other great US defense contractors.” During a meeting with the Vietnamese prime minister, Trump pitched him on importing weapons from the United States. “We make the best military equipment in the world by far, whether it’s jet fighters or missiles or rockets or anything you want to name, we make, we’re acknowledged to have made, we make the best,” Trump said. He’s also used the White House Twitter feed to promote companies like Lockheed.

Far from being a critic of Pentagon waste, Trump has actively abetted it by rewarding defense contractors with high-level government jobs. Several ex-Boeing executives received plush national security jobs, including onetime acting Defense Secretary Patrick Shanahan. Mark Esper, the current Defense secretary, used to lobby for Raytheon. But now that his private remarks attacking the troops have become public, Trump, who spent three years exaggerating his own effort to boost defense spending, suddenly seems concerned about waste and corruption at the Pentagon.