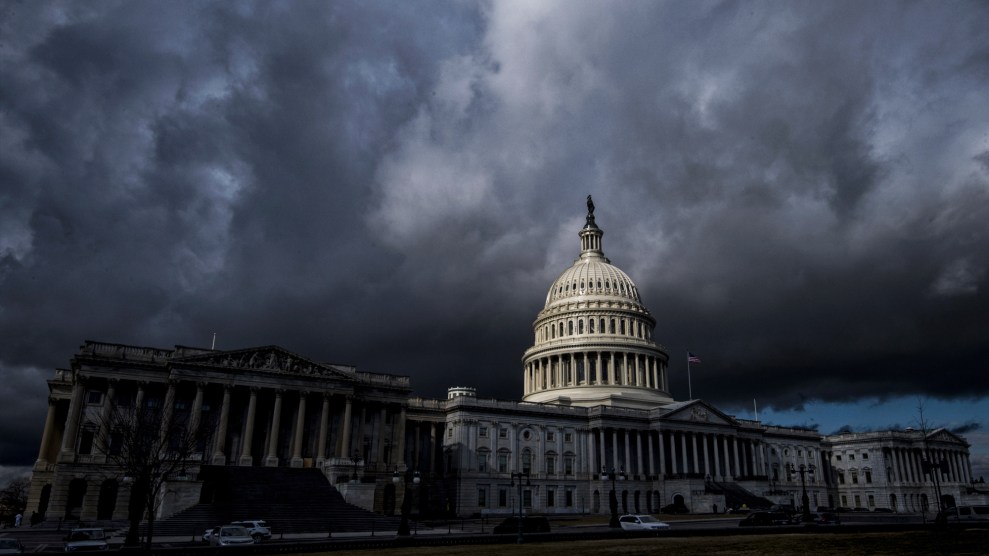 An important sticking point in negotiations over the next coronavirus relief package in Congress is funding for the US Postal Service, which will play a critical role in the November elections. As Democratic voters increasingly turn to voting by mail during the pandemic, Republicans reportedly do not want to spend the money to make sure those ballots are counted.

Democrats “want new money for the Postal Service, new money for elections and nearly $1 trillion for state and local governments,” Politico’s Playbook newsletter reported Sunday. Republicans “seem open to USPS money to address operational shortfalls, but they are a hard no on money going to a new mail-in balloting system. Dems want $25 billion for the USPS, Republicans think the number is closer to $5 billion.”

Other parts of the stalled negotiations have received more attention, including payments to the unemployed, aid to states and cities, and money for schools. But Democrats have also pushed for new funding to ensure that people are not disenfranchised in the 2020 elections by funding the Postal Service as well as providing money to local election administrators. This is especially crucial as growing numbers of voters turn to absentee ballots to preserve their health during the pandemic.

In order for absentee balloting to work, voters have to receive their ballots in a timely manner and return them in a timely manner. For that to happen, the US Postal Service needs more resources. (Voters will also have to ensure that their ballots are not discarded for problems with the ballot envelope, like a missing or mismatched signature, which regularly result in tossed ballots.) But amid a lack of resources, there are fears that the Trump administration is purposefully sabotaging mail delivery in the United States in an effort not only to interfere with the election but ultimately privatize the Postal Service.

President Trump began undermining the service early in his administration, in part as an attack against Amazon CEO Jeff Bezos because, Trump believed, USPS’s rates were too favorable to the e-commerce giant. Trump also faced pressure to privatize the Postal Service, long a goal among many conservatives; a precursor to privatization is to starve the Postal Service of funds so that it appears in need of rescuing.

The coronavirus pandemic only made the situation for the cash-strapped service more dire as a drop in sending packages cost billions in much-needed revenue. Recently, Trump installed a loyal mega-donor, Louis DeJoy, as postmaster general. DeJoy has stopped overtime pay for clerks and mail carriers necessary for completing each day’s deliveries on time. The result of overlapping and preventable crises is that mail delivery is slowing, in some places considerably, just when American democracy is dependent on mail delivery happening on time.

Mail delivery is slowing just when American democracy is dependent on mail delivery happening on time.

Requests for absentee ballots are soaring across the country as people seek ways to vote without getting sick. These rates are growing particularly for Democrats, at the urging of Democratic officials and state parties, while Republicans are slower to switch to mail balloting due to Trump’s false accusations, pushed out over social media, that voting by mail will lead to fraud. The number of mail-in ballots used this year will be magnitudes higher than in 2016, which puts millions of ballots at risk of not being counted. In 34 states, ballots received after Election Day—which falls on November 3, 2020—are not counted. In others, ballots need to be postmarked by Election Day, but a crippled Postal Service often fails to apply the postmark, which could result in more ballots being rejected.

Mail delivery failures are not hypothetical. “Neighborhoods across the Philadelphia region are experiencing significant delays in receiving their mail, with some residents going upwards of three weeks without packages and letters, leaving them without medication, paychecks, and bills,” the Philadelphia Inquirer reported Sunday. The recent cutbacks, end of overtime, and staffing shortages are leaving piles of mail unattended. “According to local union leaders and carriers, mail is piling up in offices, unscanned and unsorted.” If things don’t change, thousands and perhaps millions of ballots could be in those piles. Pennsylvania is a swing state.

An Inquirer analysis of voting in Pennsylvania’s June 2 primary elections found that voters who requested an absentee ballot more than three weeks in advance of the primary voted at a rate of nearly 90 percent, but among voters who requested an absentee ballot within the three-week window, participation dropped 76 percent. Pennsylvania’s tight deadlines for returning ballots, the frantic efforts of local election officials to keep pace with demand for absentee ballots, and slow mail delivery all contributed to thousands of voters being disenfranchised in the primary. Without a fix, the problem will only be magnified in November.

This crisis has been a long time coming. In 2018, close election results in races, including for Senate and governor, resulted in recounts and focused attention on the already poor mail delivery system in South Florida, where a majority of Democratic votes in the critical swing state come from. This year, millions of Florida voters will rely on mail-in ballots. But if they aren’t received by 7 p.m. on Election Day, they won’t be counted.