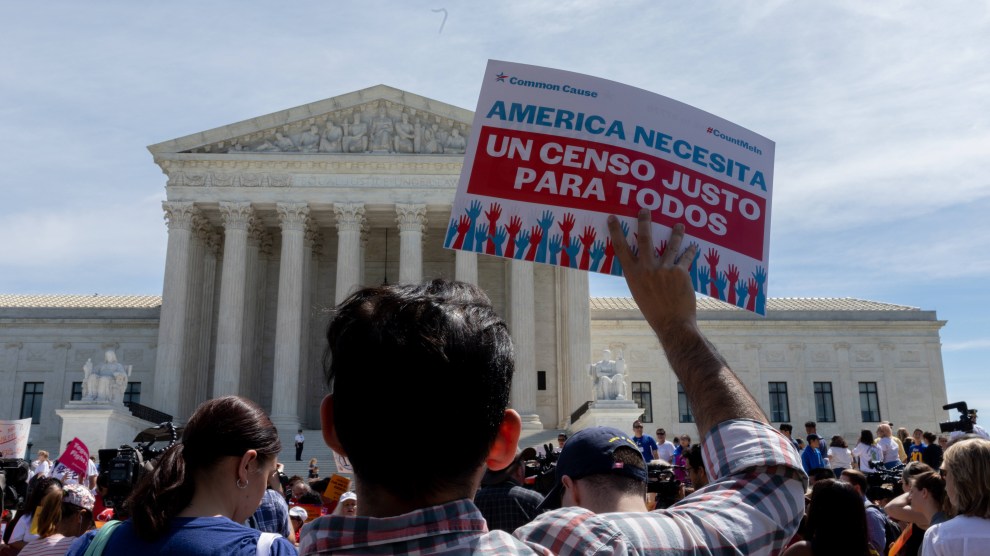 There’s less than five weeks left to complete the census, and more than a third of Americans have yet to fill out the questionnaire. The coronavirus threw a wrench in the Census Bureau’s plan for its decennial headcount, making it difficult for the agency to reach people who didn’t immediately respond online or return the forms they received in the mail. But instead of oiling the gears to boost response, the Trump administration tried dismantling the machinery.

The census determines the apportionment of seats in the House of Representatives. It dictates the distribution of hundreds of billions of dollars of government funds for the next decade. The profile it paints of the nation determines where governments will build roads and schools, and where businesses will chose to locate. It informs public health data and allows us to determine, for example, what percentage of the US population has recovered or died from the coronavirus.

But President Trump has for years sought to undermine the census by suggesting that it ask respondents about their citizenship status, and by pushing for the exclusion of undocumented immigrants from congressional apportionment after the Supreme Court found an outright count of noncitizens unconstitutional. Meanwhile, the social distancing requirements associated with the coronavirus pandemic have dogged the Census Bureau’s attempts to physically count each household that has not self-responded. After the Trump administration announced a series of political appointees to the Census Bureau, the agency said that it would cut enumeration—the dispatch of a fleet of door-knockers who follow up with people who haven’t responded on their own—a month short.

With the likelihood of a fully accurate census count growing slimmer each day, Justin Levitt, a constitutional law scholar at Loyola Law School who worked on voting rights at the Department of Justice’s Civil Rights Division under President Obama, walks us through the impact of the current administration’s assaults on the Census Bureau—and explores the legal possibilities for rectifying an incorrect count.

Before you read any further: Have you filled out the census? Have your friends and family? Here’s the link to the questionnaire. It should take about 10 minutes to complete.

The president recently issued a memorandum ordering that undocumented immigrants be excluded from congressional apportionment. Would it be constitutional for the president to deliver a count that excludes the undocumented population?

The answer is no, and it’s not even close. Flatly, clearly, no.

The 14th Amendment says abundantly clearly that when you’re counting the population for purposes of apportionment, you count everybody, “the whole number of persons in each state,” period. In order to come up with any different conclusion, you have to decide that people who are undocumented aren’t persons, or they’re not in a state. That is, “persons” doesn’t mean “persons,” or “in” doesn’t mean “in,” are the only available options for the president’s argument.

“The census is the largest peacetime mobilization in the country, and you can’t just snap your fingers and have a do-over.”

The president’s memorandum actually contemplates this. There’s an operational component that directs the Census Bureau to give him the information on the undocumented population so that he can exclude it from the apportionment count where consistent with applicable law and as practicable. What the general counsel of the Department of Commerce should come back with is, “Mr. President, we have read your memorandum. We have complied with your memorandum. I’m giving you a piece of paper with all of the information that would be consistent with applicable law and practicable.” And that piece of paper should be blank. It’s like saying, “Go rob a bank, but only if it’s legal.”

So the intent of the memorandum seems pretty clear.

There’s no question. He wants to convey the notion that we should, in his view, exclude the undocumented population in the apportionment count, and he wants to pretend like he will.

The Census Bureau recently announced that it would cut in-person enumeration short by a month. How will this affect the likelihood of an accurate count?

The pandemic substantially affected census operations. The Census Bureau acknowledged this when they originally made a request to Congress to extend follow-up into the end of October to take more time reconciling the results of that follow-up in getting the apportionment data out to Congress, and to take more time to get redistricting data out to the states. Then the Census Bureau came back and said, “Hey, remember when we told you we needed more time? We actually don’t need all of that extra time. We can do it in a month or less.” And I think there have been a lot of very disturbing questions and very little transparency about why the Census Bureau originally said they needed until October and then came back and said, “Nah, never mind.”

The Trump administration has also added several new political appointees to the census. Why is this concerning?

There have been so many irregular appointments through this administration that I don’t know that they’d be raising particular eyebrows at other times, or when there weren’t also these attempts to manipulate the census count. But a lot of people have very real questions, independent of the qualifications of the individuals he’s appointed, just because he has done so much damage to people’s ability to trust his administration and execution of basic functions related to self-governance—witness the brouhaha at the post office. I think people are very concerned about why now, why there, and why these people?

In the event that there is an inaccurate count or a severe undercount, is there anything that can legally be done to remedy that?

The big and obvious response is, can’t we just do a do-over? And the short answer is, we could, but the census is the largest peacetime mobilization in the country, and you can’t just snap your fingers and have a do-over. The preparation for the 2020 census started in 2007. Preparation for the 2030 census is already underway. It is possible, but it’s a slow train and enormously logistically complicated and enormously expensive.

Could Congress refuse to reapportion House seats based on this year’s data and just go with the numbers from 2010?

Unclear. They have actually neglected to reapportion Congress; curiously, the last time they did that was 1920, which was right after the last pandemic. But that was before a series of Supreme Court cases in the ’60s saying that you have a constitutional right to live in a place where our representatives are equally allotted, where we each have the same amount of representation. The courts haven’t had to deal with the question of what happens when we’re not sure what equal is, or when we know that the figures we’ve got via census are bad. The real answer is we don’t know.

To what extent can the Census Bureau rely on administrative records, like Social Security and USPS data, to fill in the blanks?

And, again, you can’t estimate for purposes of apportionment. It’s okay to use records that you have for actual people, but the efficacy of those administrative records runs out at some point. That’s where the non-response follow-up, in terms of actually getting information house to house, is so very important to avoid an undercount.