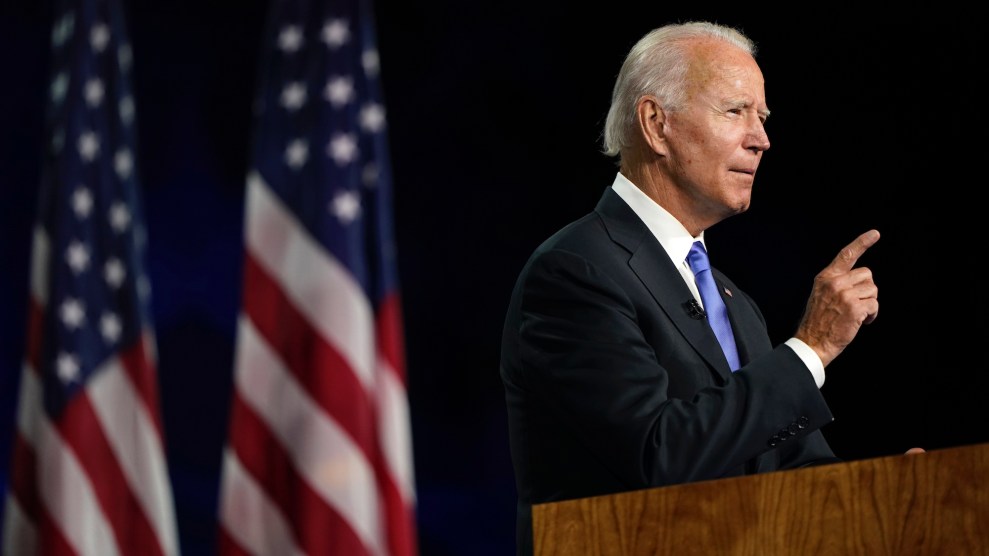 When Joe Biden went on TV to officially accept the Democratic nomination last Thursday, he likened the task ahead of him to the one that faced President Franklin Delano Roosevelt, who “pledged a New Deal in a time of massive unemployment, uncertainty, and fear.” It’s a historical precedent Biden has repeatedly turned to ever since the pandemic’s arrival in the United States coincided with the end of the Democratic presidential primary. Over the summer, he’s backed up that promise with an economic recovery plan that amounts to the most progressive platform proposed by a Democratic presidential nominee in modern history.

Alongside those policy rollouts, his campaign has been convening an ever-expanding universe of liberal wonks to map out what economic policy Biden’s would-be administration should pursue. These experts, providing their time on a volunteer basis, have spent hundreds of hours fleshing out key planks of Biden’s platform, delineating which proposals a Biden administration should tackle as executive orders, and recommending line items that should be in Biden’s first budget request. Many of the ideas emerging, like the experts themselves, hew to the party’s left.

The only question that remains: The scores of experts doing this work have no idea what degree of influence these proposals will have on the campaign as it maps out what a would-be Biden administration will pursue after Election Day.

The work is being done by an economic policy “working group”, the existence of which was first reported by the New York Times in June. At the time, the Times noted that more than 100 economic experts had been offering input into the campaign. In the months since, the economic group has ballooned to several hundred, according to the campaign; one source involved in the work estimates more than 500 experts are participating.

Their task is to develop memos detailing initiatives the would-be administration should pursue on the first day in office, as well as outlines for the first one hundred days, which could be budget proposals or task forces the White House should establish. “Our campaign is preparing across the board to be ready on Day 1 to address the economic devastation caused by Donald Trump’s reckless policies and failed leadership to combat the pandemic,” a Biden campaign spokesperson told Mother Jones when asked about the purpose of the working group. The campaign did not specify the degree to which the experts’ efforts will inform the campaign.

This economic policy committee has been organized into smaller subcommittees tackling topics such as taxes and budget, trade, poverty and mobility, macroeconomics, employment, consumer protection, housing, the “care economy”—work caring for the very old, young, and disabled—and the urban-rural economic divide. There’s also a committee dedicated to data-driven policymaking, a nod to the technocratic predilections of the Obama administration. The groups had been in “the midst of rebooting” around the time of the Times story, according to an email Biden campaign policy director Stef Feldman sent to participants in early June.

A number of the subcommittees are led by Obama-Biden administration alumni who have since rotated back into the consulting work, law firms, or private sector roles. Other subcommittees are led by the usual suspects from Democratic think tanks and left-leaning scholars. All members of the groups have been told by the Biden campaign to not speak to the press. When I reached out to Sharon Block, a Harvard labor expert and Obama administration alum who a source said is leading the employment subcommittee, and Brendan Duke, a tax expert with Congress’ Joint Economic Committee who is said to be reviewing tax policy, neither would comment. They both referred me to the same campaign email address, as instructions from the Biden campaign indicated they should do when contacted by reporters.

A spokesperson for the Biden campaign declined to respond to requests about the organization of the economic policy working group or specify its participants, but noted they represent a broad range of backgrounds, experiences, and perspectives. The experts’ volunteer work with the campaign is in a private capacity, not as representatives of their employers or clients.

The economic policy working group is just a sliver of a larger brain trust the campaign has convened. Other groups—some equally large, some even larger—have been brought together to address foreign policy and immigration; innovation; health care; education; and women’s issues. Coordinating the massive universe of liberal wonks is Larry Strickling, who worked at the Department of Commerce during the Obama years and served as policy coordinator for Pete Buttigieg’s presidential campaign.

At least some of these subcommittees are developing proposals that run to the left of what Biden himself has proposed on the campaign trail, a result of the grassroots nature of the groups’ efforts. One subcommittee, for example, is looking into reparations for descendants of enslaved Africans, something Biden himself has not committed to. Precisely what influence these efforts will have remains unclear—even to the experts crafting them. The memos are due back to Biden’s policy shop in the coming weeks, but where they go from there hasn’t been disclosed. There’s an expectation among participants that they will inform the transition in some capacity, but the Biden campaign maintains these groups are intended only to provide input to the campaign, not the transition.

While the final outcomes of these recommendations are unclear, participants who spoke with Mother Jones have been encouraged by the creativity and thoughtfulness their fellow experts have brought to the exercise. But the immediate, practical effect of the initiative has been the silence of a massive network of experts, many of whom had sided with Biden’s more progressive rivals and were critical of Biden during the primary. Participants are welcome to pen op-eds and speak to media about their subject matter expertise, but not under the auspices of their work with the campaign. The guidelines sent to participants state this plainly: “Simply put, do not talk to the press,” they read.