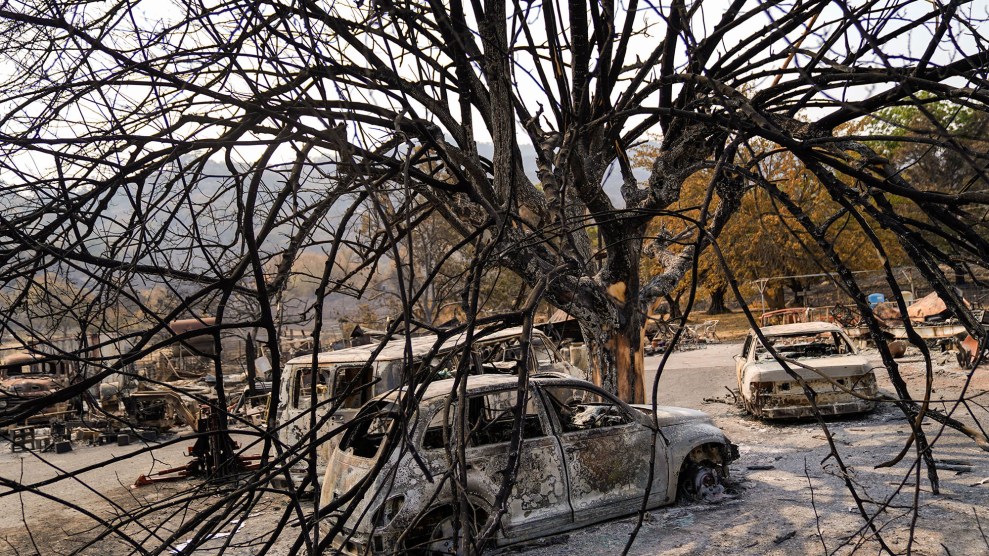 I cannot sleep; at night, my mind cycles through an Arya Stark-esque list of foes that’s too big for a clear revenge plan. A global pandemic. The fires ravaging California, where I live, and Colorado, where my sister lives. The bad actors pulling our democracy apart on multiple levels, taking center stage on TV each night. The officers killing Black men in front of their children. A hurricane that was predicted by experts to be “unsurvivable” that has swept through Texas and Louisiana (though now, the damage seems to be less severe than initially feared). Oh, and an asteroid—?!?!?!?!—that is potentially heading toward Earth. (It has been clarified that there is a less than one percent chance of impact, but still.) Which leads me to the potential signs of the end of the world, the Second Coming of Christ, the damn apocalypse: pestilence, affliction. Hellfire on earth. The war being waged over the vast racial inequality in this country, the unrest in the Middle East. The roaring of the sea. Signs in the moon and stars sounds a little more subtle than a freaking asteroid, but far be it from me!

My mind cycles through an Arya Stark-esque list of foes that’s too big for a clear revenge plan.

I was taking comfort in that there hadn’t been an earthquake…until my Utahn colleague Stephanie Mencimer (herself an expert on the signs of the end times in the age of Trump) reminded me that in March, Salt Lake City was rocked by a 5.7 that knocked the angel Moroni right off his spire at the top of the Mormon temple there. (I realize this is not the only earthquake to happen in the world since March, but this one feels particularly loaded, don’t you think?)

When I was growing up, we watched the first Left Behind movie in Sunday school; I think I was 10 or 11. If you are not familiar, then your therapist is probably grateful. Essentially, the film is an imagining of the end times from a Christian perspective, specifically that of two men, the ones who wrote the first book in a series on which the film is based, Jerry B. Jenkins and the late evangelical minister Tim LaHaye. For weeks, I had nightmares about people I love disappearing into thin air—vanishing on the spot, out of their clothes, leaving me alone to obsessively ruminate on why I had been abandoned, what horrible things I must have done to have been separated from my friends and family.

In a sense, that has happened. I am separated from my family, and I don’t know when I will see them again. If I have seen my friends, it has been at a distance, with our faces covered and our attention split between trying to be together and gauge risk at the same time, or their faces look into mine from a screen, disembodied, so they feel somewhat real but far removed from what we once had. My body feels all wrong, from being confined to a tiny granny flat where I live with my dog, my husband, and my husband’s experimental mustache (and in that last case, I do mean live with it); my carefully honed exercise routine has been shattered, replaced by half-hearted yoga sequences done in a futile attempt to unfurl my spine. My anxiety lives in my neck, my jaw, and my shoulders, and especially my hips, and lately, what it really wants to know is, “Oh god, what if I was really, really wrong and this is the end of the world and I am actually going to hell?”

Lately, what my body really wants to know is, “Oh god, what if I was really, really wrong and this is the end of the world and I am actually going to hell?”

I’m writing about this like I’m being completely tongue in cheek, but this is a very real fear. Most of my family members are still very devoted to their faith—and I am devoted to them—but I am agnostic, I suppose. I feel too small to possibly know the universe so intimately that I could know what is out there. Their faith says that I am bound for hell, that my soul will burn for eternity because I am not Christian. It is what it is. It’s not something we talk about, but it’s an edge of fear and anxiety I’ve heard in their voices. I understand it; I am not mocking it.

And lately, the more things go wrong, the more I feel that old fear creeping around the edges of my consciousness. When I was younger, when belief in a protective higher power came more easily, I vacillated between two minds—one in which I was having a terrible day and I couldn’t wait for the world to end so that I could just go to paradise and experience perfection, and the other in which I wanted to grow up and get married and have children of my own, a life of my own, before everything was taken away. Time is so different when you’re a child, and there’s so much more of it that can be devoted to just thinking and imagining and wondering. As an adult, there is less time for considering my own mortality or contemplating the mysteries of the universe; I have become, as I once would have said, of the world. I made a choice to leave my religion, and what if the cost really is eternal damnation? It’s 2020. Anything feels possible.