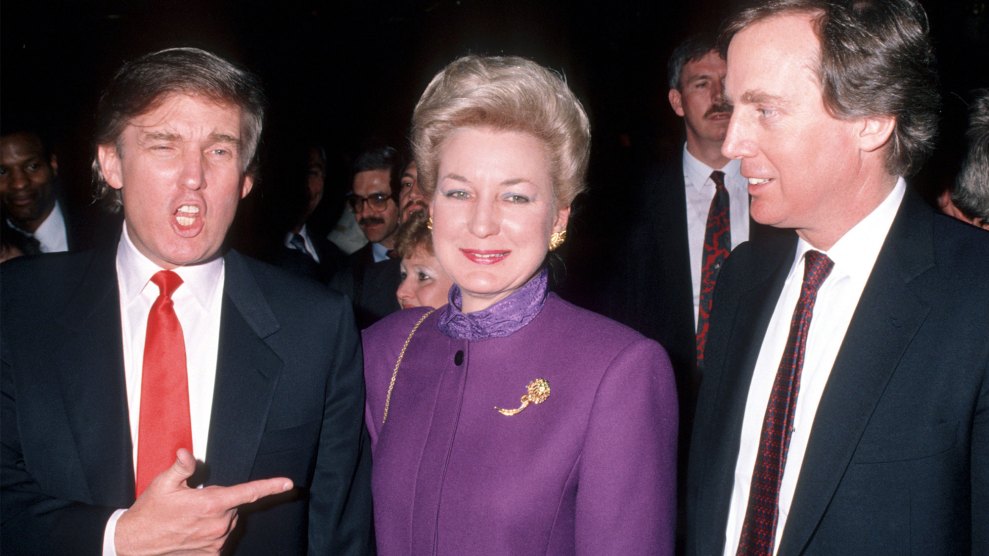 In newly released audio, President Trump’s sister Maryanne Trump Barry is candidly critical of her brother Donald, saying she did his homework for him and that he is, among other things, unprepared, a brat, and cruel.

“All he wants to do is appeal to his base,” Barry said. “He has no principles. None. None. And his base, I mean my God, if you were a religious person, you want to help people. Not do this.”

Mary Trump is the only person in Trump’s family to have publicly spoken badly of him. Last month, she spoke with Mother Jones about her tell-all book, Too Much and Never Enough: How My Family Created the World’s Most Dangerous Man, which my colleague David Corn described as “a harrowing account of a man and a clan shaped by ego, rivalry, the pursuit of wealth, and profound pathology.”

Barry, who is about ten years older than the president, had not spoken negatively about her brother in the past. At one point in the conversation with her niece, the former federal judge seemed to almost stop herself, saying that she was “talking too freely.”

Barry, 83, was aghast at how her 74-year-old brother operated as president. “His goddamned tweet and lying, oh my God,” she said. “I’m talking too freely, but you know. The change of stories. The lack of preparation. The lying. Holy shit.”

Lamenting “what they’re doing with kids at the border,” she guessed her brother “hasn’t read my immigration opinions” in court cases. In one case, she berated a judge for failing to treat an asylum applicant respectfully.

Mary Trump told the Post that she secretly recorded about 15 hours of conversations with Barry in 2018 and 2019. Barry had been out of the public eye until Trump told Fox News in 2018 that “maybe I’ll have to put her at the border,” to stop the thousands of families seeking asylum at the US border. This was also around the time the Trump administration was separating families at the border.

Maryanne Trump Barry is not just “Trump’s sister,” she was until 2019 a respected federal judge, appointed by Reagan to the District Court of New Jersey and by Clinton to the Third Circuit Court of Appeals. And these comments, which came during family separation… whew. https://t.co/361NiuNANi pic.twitter.com/rhF8AToZkm

The White House responded to the Washington Post after the story was published, with a statement that read: “Every day it’s something else, who cares. I miss my brother, and I’ll continue to work hard for the American people. Not everyone agrees, but the results are obvious. Our country will soon be stronger than ever before!”