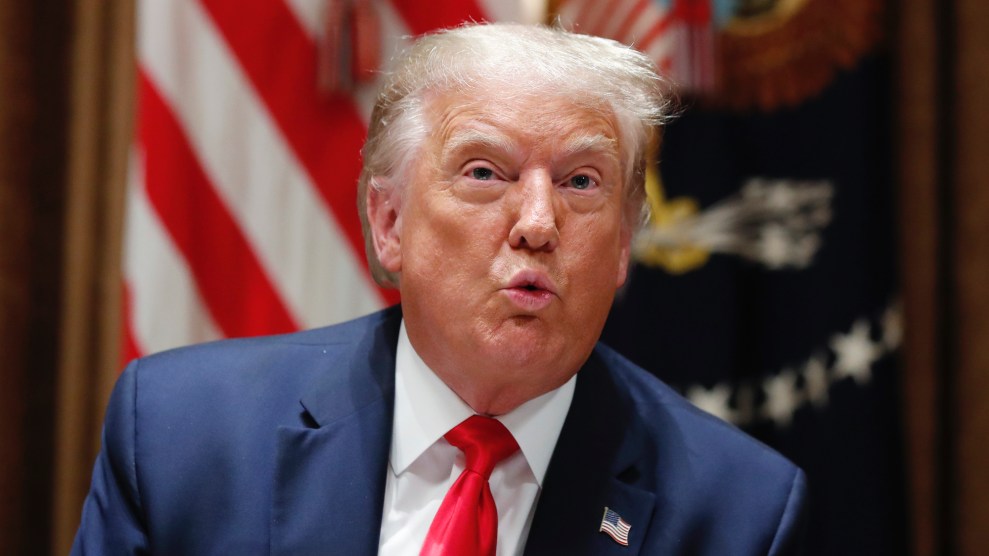 Before COVID-19 hit, Donald Trump’s business empire was continuing to earn hundreds of millions of dollars. But the president’s recently filed personal financial disclosures show that much of that came from hotels and resorts, two of the industries hardest hit by the pandemic. We won’t know the specifics of how COVID-19 has diminished Trump’s wealth until next year (and even then, only if he is reelected and has to file another disclosure), but based on last year’s report, it could get quite ugly for the president—right before he has hundreds of millions of loans due to private lenders.

Trump annually files a personal financial disclosure form that details the income he earned, the assets he owns, and the debt he owes. It is not as detailed as his tax returns, and it crucially leaves out key information for assessing the president’s financial status—for example, how much money he spends. According to the most recent copies of the forms, filed Friday night, Trump earned at least $446 million in the 2019 calendar year through his businesses and investments—a slight uptick from the previous year. But it’s not clear how much of that the president kept, and even when numbers appeared to be good for individual businesses in the president’s portfolio, all may not be as well in reality.

For instance, according to Trump’s disclosure, his Turnberry golf resort in Scotland earned $25.6 million in revenue in 2019, up $5.2 million from 2018. But those figures don’t include how much it costs to run the golf course—and it costs a lot. We know from corporate filings in the United Kingdom that in 2018, the golf course actually lost $13.1 million—far more than even the 2019 increase in revenue. Unless Trump dramatically cut costs at Turnberry (we’ll know later this fall when the British corporate filings are due), it seems unlikely the course was profitable.

At Trump’s Mar-a-Lago resort, which he touts as “the Winter White House,” revenues slid by $3.7 million to $21.4 million for the year. No information is available on how much Trump spends to operate Mar-a-Lago, but it’s not a good sign for one of his marquee properties. Down the road at the Doral golf course he owns—which he tried to steer an international summit to last fall—revenues climbed $2.4 million from 2018 to 2019, but profitability at the resort has slipped since Trump was elected.

Trump’s other favorite vacation getaway, his golf club in Bedminster, New Jersey, also had revenues rise by about $2.5 million last year, but across many of his other golf courses, revenues seemed to just inch up, even as the economy as a whole was roaring. Trump’s Jupiter golf course, in Palm Beach, Florida, where he frequently golfs while visiting Mar-a-Lago, saw an increase in revenues of just about $429,000.

One of the most prominent properties the president owns is a luxury hotel in downtown Washington, DC, which he opened shortly before Election Day in 2016 and quickly became a hangout for administration members, lobbyists, and foreign delegations hoping to make an impression on the president. Trump rents the building from the federal government and pays rent, partially based on how much profit he makes—and has yet to pay above the basic amount, suggesting that even as its revenues inched up to $40.5 million (a $150,000 increase from 2018), the property is still not making much money for the president when all its expenses are added up. The Trump family announced they were planning to sell the property last fall, but the sale seems to have been put on hold.

To the degree that the Trump Organization appears to have been financially healthy in 2019, much of the business is built on Trump’s resort and hotel business. Besides his golf clubs and hotels he owns, Trump manages hotels for others around the world. All told, revenues from resorts, hotels, or management fees accounted for $352 million, about 78 percent of all of Trump’s revenues. The bad news, for Trump, is that in 2020, just weeks after the period covered in this financial disclosure, the COVID-19 pandemic steamrolled across the global economy, with the hotel and resort industries hit particularly hard. One industry group estimates American hotels have lost $46 billion in revenue since the pandemic started.

At one point, nearly all of Trump’s resorts were closed, and he was forced to lay off as many as 1,500 employees. His Scottish golf courses rely heavily on wealthy American golfers, but with international travel out of the United States almost completely curtailed—the UK has maintained a two-week mandatory quarantine for travelers from the United States—any progress reported by Trump’s businesses in 2019 has likely been completely erased in 2020.

In that respect, the Trump Organization is no different than almost every other business around the world, but the president—who has retained full ownership of all of the properties, refusing to divest upon taking office—has some unique challenges. For one, he continues to owe a lot of money. The 2019 personal financial disclosure shows no substantive change in his listed debts—he still owes hundreds of millions to lenders on mortgages for some of his favorite properties. While Trump’s overall level of debt is not unusually high—the New York Times estimated his assets are worth about $1.35 billion compared to debt in the neighborhood of at least $470 million—several of his largest debts are coming due in the next few years, possibly during a second presidential term. Among others, Trump will need to repay Deutsche Bank about $125 million for mortgages on the Doral resort, and $170 million on the Washington, DC, hotel. If Trump doesn’t have the cash to pay these debts, he could try to refinance the loans—but banks will look toward his recent revenues to determine his creditworthiness, numbers that will probably not be pretty after the damage from the pandemic is totaled up.