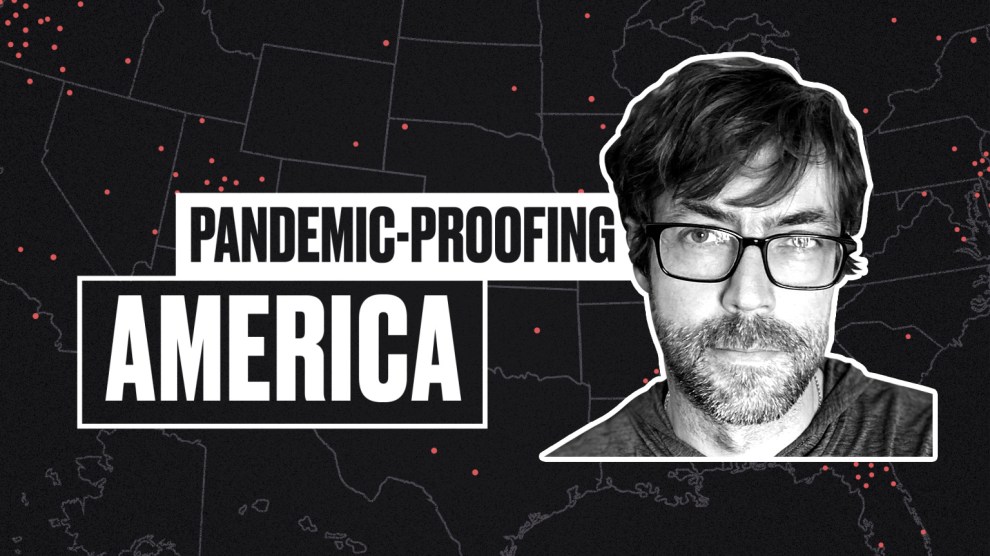 As the world grapples with the devastation of the coronavirus, one thing is clear: The United States simply wasn’t prepared. Despite repeated warnings from infectious disease experts over the years, we lacked essential beds, equipment, and medication; public health advice was confusing, and our leadership offered no clear direction while sidelining credible health professionals and institutions. Infectious disease experts agree that it’s only a matter of time before the next pandemic hits, and that could be even deadlier. So how do we fix what COVID has shown was broken? In this Mother Jones series, we’re asking experts from a wide range of disciplines one question: What are the most important steps we can take to make sure we’re better prepared next time around?

William Hanage is an epidemiologist at Harvard’s T.H. Chan School of Public Health who studies the spread of infectious diseases. In the past, Hanage, who is British and trained at Oxford University and the Imperial College London, has looked at how viruses and bacteria evolve. Since the pandemic began, he’s written a paper evaluating the effectiveness of coronavirus control measures in China—and he’s emerged as a sharp critic of the American government’s response to the virus. In a recent Washington Post op-ed, he wrote: “In the spring, the federal pandemic response was akin to bringing a rubber chicken to a gunfight. The attempt to defend against the greatest threat to public health in a century was limp, grudging and delayed. Now it is barely existent.”

It’s just not something that makes it possible for us to respond in any kind of coherent fashion. A pandemic comes at you really fast. My experience with this one was this absolute rushing sense of a tidal wave coming in early March. We were looking at the number of cases and predicting when that was going to be here—and then trying to convince people that we couldn’t be doing business as usual, because the doubling time was like twice a week. There is a real problem with a balkanized health care system of the sort we have in the United States. What is working in one place is not necessarily what’s going to be working in another place, due to all kinds of local regulations. The complicated system that the US has must be overhauled to become simpler, and that will take huge political will. Medicare for All could be a step in the right direction.

The most crucial part is to accept that mistakes are being made. Don’t try and hide them and sugarcoat them for some political game.

Historically people have seen health care as a profit-making thing, which means that there’s much less investment in the possibility of having things like ventilators for an emergency. And the situation in which states are having to compete for things like personal protective equipment or ventilators is utterly counter to everything that we would hope for health care in a pandemic.

On what we can learn from the UK and Germany: Having a one-stop shop for health care, like the UK’s National Health Service, is helpful. The dexamethasone finding came out of the UK, and I think one reason they could do that is it’s easier to do a trial like that there rather than here, where even the largest health care providers deal with coordinating massive numbers of patients in very different contexts.

Germany’s response has been widely praised, and I would join in that praise. It was focused on somewhat different things. The thing that was interesting was that each of the Lander [local regions] were able to devise their own testing systems. Whereas here, everything was supposed to be controlled by the FDA and the CDC, which ended up going completely awry in terms of developing a test that could be used effectively in order to study the emergence within the American population.

On the importance of learning from our mistakes: The most crucial part is to accept that mistakes are being made. Don’t try and hide them and sugarcoat them for some political game. Just accept that you have a once-in-a-century-scale public health crisis. And once you’ve accepted that, you can start working on how to make it better rather than pretending it’s not there. We need an honest accounting of the current situation, just looking at it and recognizing that the phases haven’t worked. We need to recognize that it’s not the same for every part of the country. Here in Boston, we’ve gone through our three-week ICU surge and had a really tough time in that area. But now community transmission has dropped. We need to be talking to people, for example, in Arizona, because they’re quite in the thick of it.

On why we need to consider the worst-case scenario: The last administration thought about pandemics. One of the biggest problems with the current situation actually dates back to 2009 and swine flu. In 2009, a pandemic was called, and, as a result of a pandemic being declared by WHO, the world swung into action against the virus, which, in the end, turned out to be pretty serious. It killed well over a million people. But it was not the kind of existential threat that people had initially worried about. And that means that when people warn about pandemics the tendency is to think that they are crying wolf, or that it’s not going to be as bad as they say it’s going to be—when actually, it could be.

When I talk to local people, like a city council or a schools’ committee, I say, “What cost are you willing to accept for being wrong? What is an acceptable cost to you?” Frankly, we got lazy, and we’re not prepared for something like this. Even people like me and my colleagues, we would look at the data and kind of think, can it really be that bad? It’s hard to admit to yourself that it really can be that bad, but you have to know in the back of your mind that it may well be.