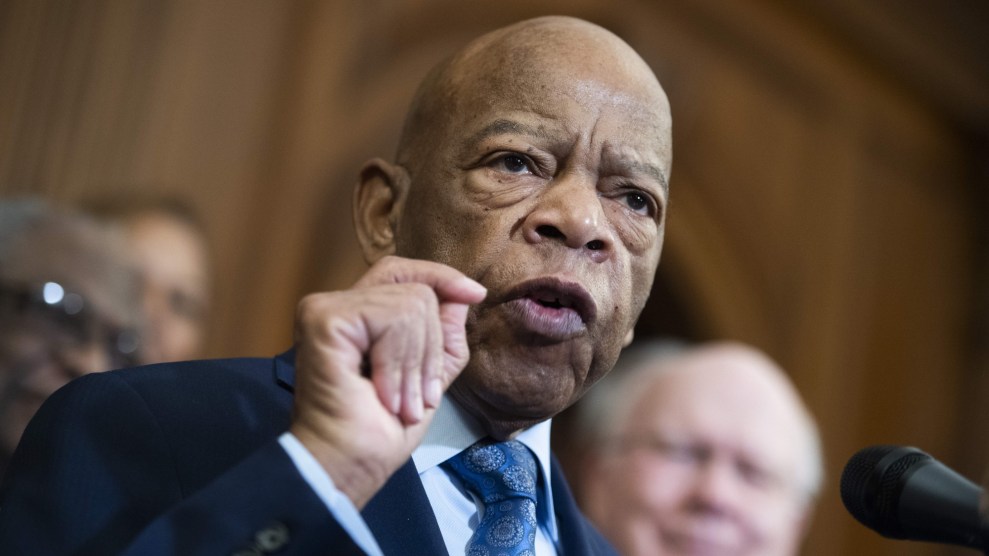 Civil rights hero John Lewis, 80, very much still needed, died Friday of pancreatic cancer. He had helped in the early 1960s to pioneer the regime of nonviolent confrontation in the fight against racial segregation, and his death came amid an uprising that had heartened him with its echoes of the racial justice movement of his youth.

“It was very moving, very moving to see hundreds of thousands of people from all over America and around the world take to the streets — to speak up, to speak out, to get into what I call ‘good trouble,’” Lewis told CBS in June, referring to massive Black Lives Matter demonstrations across the country. “This feels and looks so different. It is so much more massive and all inclusive.

“There will be no turning back,” he said.

Lewis was a son of sharecroppers. He spoke with a stammer, and he was once thought too country, too unpolished, by the movement he would eventually help lead. Taylor Branch, in his landmark history of the civil rights era, Parting the Waters, describes the first meeting between Martin Luther King and Lewis, then 18 years old:

King encountered a young man somewhat like himself in appearance—small, study, dark-skinned, with a rounded face built for warmth more than looks—but completely lacking in refinement. Lewis spoke with a stammer, and could barely complete a full sentence even when the stammer gave him peace. He said he had “come up” so far back in the country that he could not remember even seeing a white person in his youth. This made him decidedly not the type the NAACP lawyers had been choosing for integration test cases, because he appeared to be a Negro whom no amount of education could polish. Yet there was an incandescence in Lewis that shone through all his shortcomings.

Lewis took part in the 1961 “Freedom Rides” interstate buses into the segregated Southern United States. As the chair of the Student Nonviolent Coordinating Committee he was a key organizer of the 1963 March on Washington, where he was the youngest speaker. (His speech is notable not just for what he said but for what he was not permitted to say.) Lewis worked with King on voting rights demonstrations in Selma, Alabama. That’s where Lewis and other marchers were brutally attacked by Alabama state troopers on March 7, 1964, “Bloody Sunday,” after they crossed the Edmund Pettus Bridge. Lewis worked to register Black voters in the 1970s, worked in Carter Administration, served five years on Atlanta’s city council before claiming a House seat representing Atlanta in 1986, having defeated fellow civil rights activist Julian Bond in a primary.

Lewis, who in his younger days clashed with movement elders like attorney Thurgood Marshall who favored less aggressive tactics, died a universally celebrated figure. His passing caused “Not John Lewis” to trend on Twitter. On Saturday, even Republicans who are working to thwart voting rights, the principal cause of Lewis’ career, celebrated his early civil rights work, saying little of his more recent efforts.

Senate Majority Leader Mitch McConnell, who has declined to take up a voting rights bill passed by the House and championed by Lewis, called the late congressman “a pioneering civil rights leader who put his life on the line to fight racism, promote equal rights, and bring our nation into greater alignment with its founding principles.”

On Saturday, House Speaker Nancy Pelosi also ordered that flags at the Capitol be lowered to half-staff. “In the Congress, John Lewis was revered and beloved on both sides of the aisle and both sides of the Capitol,” she said. “All of us were humbled to call Congressman Lewis a colleague, and are heartbroken by his passing. May his memory be an inspiration that moves us all to, in the face of injustice, make ‘good trouble, necessary trouble.'”

Not many of us get to live to see our own legacy play out in such a meaningful, remarkable way. John Lewis did:https://t.co/KbVfYt5CeQ

“In so many ways, John’s life was exceptional,” Obama wrote. “But he never believed that what he did was more than any citizen of this country might do. He believed that in all of us, there exists the capacity for great courage, a longing to do what’s right, a willingness to love all people, and to extend to them their God-given rights to dignity and respect. And it’s because he saw the best in all of us that he will continue, even in his passing, to serve as a beacon in that long journey towards a more perfect union.”