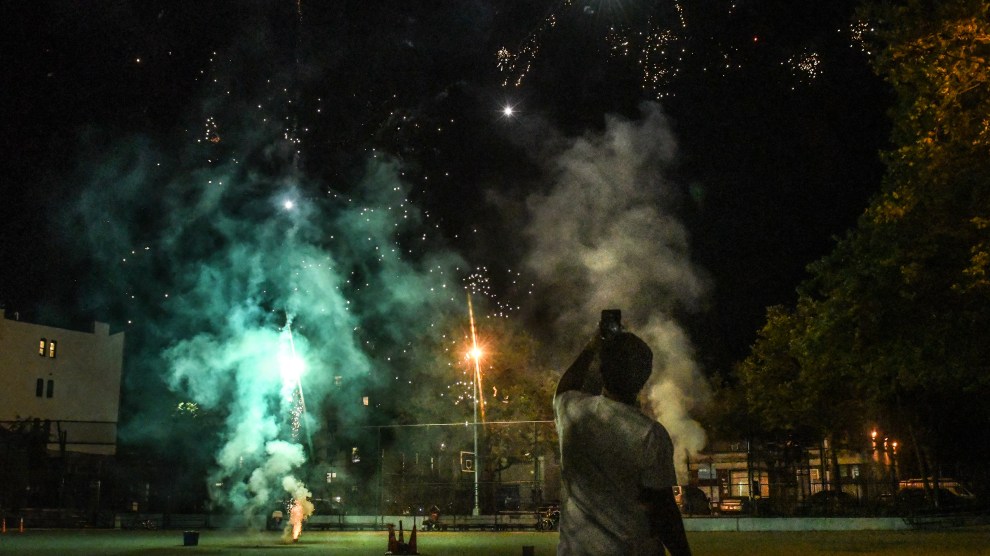 An amateur fireworks display in Brooklyn from June.Stephanie Keith/Getty

John Williams had just finished his fourth novel and was trying to figure out how to sell it. His 1967 book, The Man Who Cried I Am, focused on a CIA plot to stave off an inevitable Black uprising by exterminating all people of African descent. The existing avenues for promotion weren’t particularly receptive to Black fiction-writers like Williams. So he sought to generate buzz by photocopying sections of the book discussing the plot, which he dubbed the King Alfred Plan, and leaving them on subway seats in Manhattan.

Given the consistent onslaught of covert attacks on the Black community, conspiratorial thinking can be a survival tool.

As Williams admitted himself in a 1971 interview with Jet magazine, the marketing gambit didn’t help The Man Who Cried I Am sell particularly well. But it still had a lasting impact: as Herb Boyd, a journalist and New York college professor, wrote in a 2002 issue of Black Issues Book Review, the “ploy worked so well that soon after, black folks all over New York City were talking about ‘the plan’” which “many thought was true.”

It wasn’t, but the King Alfred Plan tapped into a very real fear of the government targeting and persecuting Black communities in an era characterized by grossly illegal plots, including the FBI encouraging Martin Luther King Jr. to commit suicide and the assassination of Black Panther activist Fred Hampton.

In the 60 years since Williams dreamed up the King Alfred Plan, the paranoia that helped the conspiracy spread is still embedded in the minds of many Black Americans. Most recently, that fear has manifested itself in popular explanations for the surge of fireworks that have been popping off in urban areas across the country, leading to sleepless nights and wild rumors.

For the last several weeks, city dwellers all over the United States have posted on social media about hearing and seeing unprecedented displays of fireworks. Reporting has backed up the claims. One fireworks wholesale retailer told the Atlantic that there were 60 percent more orders than normal, and that those customers were spending up to 40 percent more than usual. The president of the American Pyrotechnics Association told CNBC that some sellers have seen a 200 to 300 percent sales jump.

As posts about the fireworks went viral, suspicions that something unexplained was underway began to crop up. “Too many ppl from major cities sayin this,” rapper Wale tweeted on June 20. “Something is afoot.” More elaborate stories and conspiracies started popping up soon after his post.

“We think this is psychological warfare, the first wave before whatever the next stage of the attack is,” novelist Robert Jones Jr. wrote on June 20, in a Twitter thread about the fireworks that would go viral. “There is NO WAY IN THE WORLD that young Black and Brown people would otherwise have access to these PROFESSIONAL fireworks.”

Jones speculated that “the government is providing these to neighborhood young people,” theorizing that the fireworks could be a “desensitization” tactic for impending martial law or a method to cause sleep deprivation in minority communities in retaliation for protesting against police in the wake of the killing of George Floyd. “They clearly don’t understand that they’re pawns,” he wrote, before warning that “cops may be setting young folks up” for arrest. Jones’s thread got serious attention, receiving around 10,000 likes. It was even boosted by respected journalists on Twitter, including Pulitzer Prize-winning New York Times reporter Nikole Hannah-Jones.

It’s easy to laugh at the fruits of this paranoia when they are incorrect. But they are sometimes correct.

Since these theories took off, reporters have dug into the fireworks and found a simpler explanation. Legal fireworks sales are up, and the fireworks black market also appears to be thriving. Resellers have imported fireworks across state lines into areas where they’re illegal and sold them on the streets. Bored kids who had been pent up at home under coronavirus lockdown without anything to do are taking advantage of readily available fireworks to pass the time.

Despite all the counterfactual evidence to the fireworks as a psyop conspiracy, a lot of people thought that there was something to it.

Two days after Jones’s thread, Nigerian American writer Clarkisha Kent wrote about the theory in another moderately viral thread. Her points echoed Jones’s but also explained why, even in the absence of firm evidence, the theory caught steam. “Here’s the reason I’m not so quick to denounce Black ‘conspiracy theorists,'” Kent wrote. “The stuff that has happened to Black people in this country (and even elsewhere in the world) IS the stuff of conspiracy theories. It IS the stuff of science fiction.”

When she wrote the “stuff that has happened to Black people,” Kent was referring not only to government backed-suppression of civil rights era black activists, but to older official initiatives like the Tuskegee experiments—in which Black men were unknowingly coerced into becoming guinea pigs for Syphilis studies—and forcibly sterilizing large numbers of Black women in North Carolina for almost half a century that jeopardized Black lives or prevented Black births.

Patricia Turner, a professor at the University of California Los Angeles’s Department of African American Studies, says the fireworks conspiracies “reminded me of an adage: ‘Just because you’re paranoid, doesn’t mean they’re not out to get you.’”

While the mantra is usually used by deluded conspiracy theorists, for Black Americans, history has proven the advice valid. The idea that fireworks are being intentionally planted into the hands of Black youth as a part of a nationwide law enforcement effort is deeply paranoid. But is it less outlandish and unbelievable than lying about giving free healthcare to people with syphilis and then letting them die? Less outlandish than state-funded medical workers forcibly sterilizing women? Less outlandish than sending letters to civil rights leaders urging them to kill themselves? None of these are science fiction, novel plots, or conspiracies.

Being or feeling excluded from politics is a consistent trait among conspiracy theorists.

Turner told me that the fireworks conspiracy called to mind the enduring power of stories about crack cocaine being introduced to impoverished black communities by the federal government. Like drugs, “fireworks usually aren’t manufactured in the community,” they’re manufactured elsewhere and shipped in, she said, noting that “they both have the potential to be destructive to those using them and those around them.”

As with John Williams’s King Alfred Plan theory and the fireworks theory, there was no evidence of a government plot to spread illegal drugs to any segment of the U.S. population. But reporting in the ’80s and ’90s by the Associated Press and the San Jose Mercury News—later corroborated in key respects by information unearthed in official inquires—revealed that Central American paramilitary forces allied with the CIA had funded operations by selling crack and cocaine in the US with the agency’s knowledge.

Given the consistent onslaught of covert attacks on the black community, conspiratorial thinking is arguably a survival tool: a “productive resource” as Anthony Cooke, a former professor at Georgia Southern University, once put it in an article titled “Black Community, Media and Intellectual Paranoia-as-Politics.” Published in 2011 in the Journal of Black Studies, Cooke wrote that Black Americans in the 1960s, facing “segregation, unemployment, and anti-Black terror,” turned to deep suspicion and often outright conspiracy theories as a means of ensuring “both physical and psychic survival.”

It’s easy to laugh at the fruits of this paranoia when they are incorrect. But they are sometimes correct. In the 18 months prior to health officials acknowledging that there was something wrong with the water in Flint, Michigan, authorities repeatedly promised the water was fine. Black people, meanwhile, repeatedly said something was wrong, drawing national attention that ultimately proved the claims right, and giving some the opportunity to obtain alternate sources of water. The survival tool worked.

There is no single determinant of what kind of person turns to conspiracy theories, and believers sit along a vast spectrum of ideology and intensity. But being or feeling excluded from having a voice in politics is a consistent trait among many who believe in conspiracy theories. Journalist Anna Merlan, the author of Republic of Lies: American Conspiracy Theorists and Their Surprising Rise to Power, has observed that one driver of conspiracy ideation is “rising disenfranchisement, a feeling many people have that they are shut out of systems of power, pounding furiously at iron doors that will never open to admit them.” Social science research has reached the same finding.

Throughout American history, Black people have waded through both literal and metaphorical disenfranchisement, and been represented by elected leaders who don’t or can’t come through on policies that would alleviate suffering in their communities. It might not be a coincidence that the fictional King Alfred Plan found an audience ready to believe and spread it in 1967, just a few years after the enactment of the Civil Rights Act.

While Martin Luther King Jr. and allies who pushed for the bill never claimed that it would be a panacea ending racial inequity, by the end of the decade, it was becoming clear that changes in the law weren’t doing much to address structural racism. The wealth gap between Black and white households was more or less as large as it had ever been. Black incarceration rates were still on the rise. Even with sweeping civil rights legislation on the books, many things were still atrocious for Black America. It would not be unreasonable to suspect some conspiracy from “the man” launched to thwart promises of progress, even if like-minds disagreed on the specifics.

Today, as establishment Democrats tell Black Americans driven to protest after the George Floyd’s killing that demands of defunding or abolishing the police in the pursuit of racial justice are off the table, there’s been a proliferation of fireworks conspiracies positing a plot targeting Black youth. As the community’s demands have been rebuffed, highlighting their powerlessness, they’ve been drawn to a unsubstantiated story that nonetheless correctly identifies where the power is (in the hands of the police) and who it targets (Black youth and communities).

What will come out of the protests is unclear, but the fireworks rumors could portend larger conspiracies if, like in the 60s, gaping holes are left in policies to mitigate systemic racism. Even as the conspiracy has faded on Twitter, police in Boston, New York, Rhode Island, and elsewhere have promised crackdowns on fireworks. New York City Mayor Bill De Blasio said that the city’s ramped up response to fireworks would include “undercover buys” and “sting operations.” More arrests almost always mean more Black arrests—a very real consequence which the conspiracy theorists saw coming.