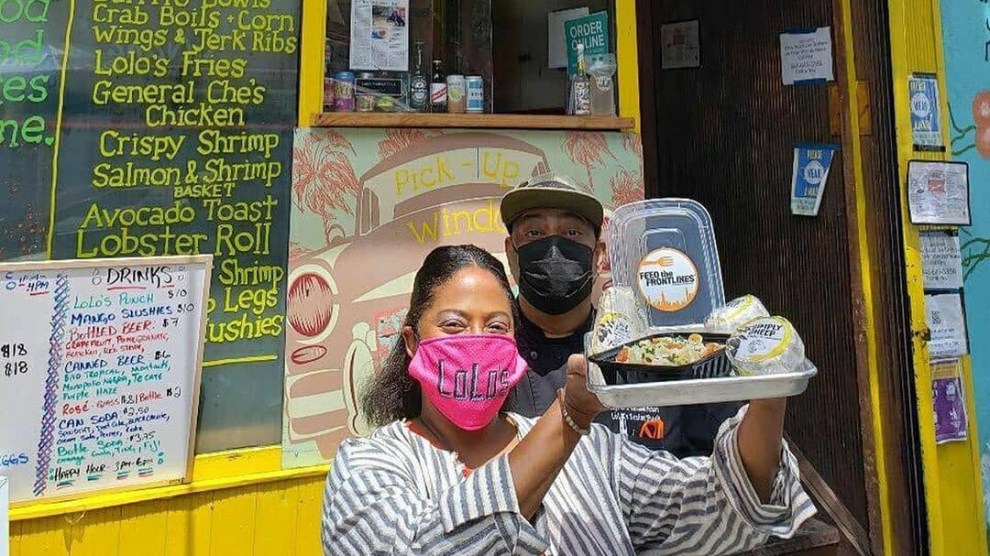 When New York City shut down in mid-March, Leticia “Skai” Young told herself that if her Harlem restaurant could earn 50 percent of its regular revenues in the midst of a pandemic, she would count it as a win. LoLo’s Seafood Shack—known for Caribbean-style fish dishes and decor that makes you feel like you’ve traveled to the tropics—got most of its business from dine-in customers who love its colorful patio. Another chunk came from corporate catering contracts. Suddenly, both of those revenue streams were no longer an option.

Young; her husband, Raymond Mohan, who is also the restaurant’s head chef; and the staff got to work. They added more delivery platforms, reconfigured the restaurant to create an outdoor order window, and joined an initiative that paid them to make about 300 daily meals for food-insecure households in the neighborhood. They reached 70 percent of regular revenues, which meant they were breaking even and “barely hanging on,” Young says.

Even with this lost revenue, LoLo’s was doing better than many Black-owned businesses in the United States. Between February and April of this year, 41 percent of Black-owned businesses closed their doors, a National Bureau of Economic Research study found, a higher share than for businesses owned by any other racial group. The overwhelming majority of Black-owned businesses didn’t qualify for the first round of the federal government’s Paycheck Protection Program loans designed to help small businesses, because recipients were required to use the bulk of the loans for payroll. As of 2012, more than 2.5 million of the 2.6 million US Black-owned businesses had no employees beyond their owners, notes Ron Busby, president of US Black Chambers, which represents local Black chambers of commerce across the country.

But in June, LoLo’s started to see a surge in business. As the racial justice protests sparked by George Floyd’s killing gave way to a national reckoning about police brutality and economic fairness, they also ushered in a movement to support Black entrepreneurs. Consumers have blanketed the internet with hashtags—#BuyBlack and #BuyBlackOwned—and with lists of Black-owned businesses to support. LoLo’s has been included on one such list after another. It has been highlighted on gourmand Instagram accounts, featured on apps, and tagged on social media. As neighborhood protests ramped up in June, more and more locals came by to grab food.

“It has been amazing,” Young says. “People are speaking up with their dollars.”

LoLo’s has returned to pre-pandemic revenue levels before New York City has even fully reopened. The Juneteenth holiday was the busiest day since the restaurant opened in 2014.

Young, like other Black business owners and leaders who spoke to Mother Jones, is glad to see the spotlight on Black-owned businesses but says it’s just the beginning of the changes that must happen before businesses like hers have an equitable shot at success.

“Sometimes I think that opening up a Black-owned business is an act of resistance in itself,” Young says. “We’re so grateful for the support. And I have all the hope that support will continue and hopefully increase. But the various obstacles to being a Black business owner are very real.” She adds, “Those things aren’t going to go away in a day or a week.”

The push to support Black businesses began almost immediately after slavery ended. Over the next century, civil rights activists from Booker T. Washington to Marcus Garvey urged African Americans to do business with one another to build wealth, amid a financial system that routinely targeted Black communities with violence and blocked Black access to credit.

The “buy Black” idea has morphed since then to encourage all consumers to support Black businesses to mitigate the racial wealth gap. National interest in the movement has ebbed and flowed in recent years, often surging on the heels of police brutality protests. That pattern has repeated itself following this summer’s protests—but on an unprecedented scale. In addition to the Black-owned businesses lists, apps that direct users to Black-owned companies have seen download spikes, while tech companies, from Yelp to UberEats, have created tools to allow users to search for Black-owned businesses. On Juneteenth, Beyoncé released her own Black-owned business directory. One website that encouraged people to upload their receipts from shopping at Black-owned businesses recorded more than half a million dollars of spending in three days.

Not everyone agrees that supporting Black businesses is the best way to advance racial justice. Jared Ball, a communications professor at Morgan State University and the author of a recent book critiquing the idea of Black buying power, believes that the focus on buying Black misses the point. In the long term, such efforts may help some Black businesses, he says, but will also push a “mythology” that this sort of spending can itself close the centuries-old racial wealth gap. Instead, he thinks what’s needed is policy change aimed at shifting “how wealth is generated and where it goes.”

For the moment, at least, “buy Black” efforts from Oakland to Houston to Chicago appear to be speeding up the recovery for Black-owned businesses during an economic crisis that has hit them disproportionately. If it continues, this surge in business would help to address the inequities that existing Black businesses can face, says Busby, including worse reviews and slower revenue growth. But that won’t fix the long legacy of discrimination that Black entrepreneurs have faced when they’re trying to start or expand a business, particularly when it comes to accessing financing.

“We got your understanding and your attention through the marches and protests,” Busby says. “What we don’t want to see is that once the emotion is gone, we go back to business as usual.”

For the last three months, Busby and the US Black Chambers have been working on this issue. Busby says he’s met with the Small Business Administration on behalf of dozens of local Black chambers to explain ways the PPP program could better serve Black-owned businesses and to push for reform of the SBA’s business development program aimed at helping minority-owned businesses. He also has plans to meet with the Congressional Black Caucus, he says, to present a list of policy proposals, including the establishment of a $5 billion Black entrepreneurship fund.

Busby also has plans to meet with representatives of more than 30 corporations to discuss private-sector solutions. One proposal calls on companies to interview Black candidates for all executive positions, with the goal of increasing Black representation on Fortune 500 boards and in c-suites by 15 percent. But Busby’s top priority is getting corporate America to remove barriers to borrowing for Black entrepreneurs.

“The number one, two, and three concern of Black businesses is access to capital,” says Busby. He adds that only about 30 percent of Black-owned businesses “have a true banking relationship”—the key to accessing credit when times get rough and money gets tight—due in large part to the unequal reception that Black business owners receive when interacting with banks, where they’re turned down for loans at double the rate of white-owned businesses.

One 2017 study found that Black-owned firms applied for new funding at a rate 10 percent higher than white-owned firms, but approval rates were 19 percent lower. A 2016 paper by Stanford University economists found that Black-owned businesses finance significantly more of their operations from personal funds than white-owned firms. Their data, the authors write, “suggests that black-owned businesses have more difficulty in accessing formal credit channels…This results in businesses that start with smaller amounts of financial capital and that do not ‘catch up’ over time.”

Rumia Ambrose-Burbank, the majority owner of VMS365, an industrial supply management company in Michigan, says she met with her banker monthly for years, well before she might need to ask for a loan, because she was aware of the extent to which weak banking relationships can hurt Black entrepreneurs. “Most startups, your basic thought is just getting the operations and stabilizing,” says Ambrose-Burbank, who co-founded the $54 million company in 1999. “The last thing you’re thinking about is going to have lunch with your banker when you’re not in need of a loan…Being a minority-owned business, we have to do things that companies that are not minority-owned don’t have to do.”

Several banks have pledged in the last month to boost lending to Black-owned businesses. But they haven’t yet revealed key details, Busby says, such as how they’ll ensure that interest rates are equitable for all borrowers.

“We’re paying 19.8 percent and the white [business owner] is paying 10 percent,” he says. “Having access to the funds is important, but it needs to be affordable as well.”

Young, of LoLo’s, is also no stranger to the challenges of accessing capital.  She and Mohan opened LoLos with their own funds, with a vision for a restaurant that would give back to the Harlem community where Young grew up and embody the spirit of the British West Indies, where Mohan was born, and where the pair lived for a time. After five years in business, they applied for a bank loan for an offshoot restaurant and were denied; Young says the bank saw the investment as too risky. They sought funding elsewhere and got a loan from the Harlem Entrepreneurial Fund, started by Black entrepreneurs with a focus on investing in minority owners in Harlem, the Bronx, and nearby neighborhoods.

Young says she is hopeful that the recent protests will “shine a light” on the need for more access to capital for Black-owned businesses and the systemic racism that underlies the challenges faced by Black entrepreneurs. At the same time, she says, her own experience securing funding is indicative of how much progress remains to be made. At the end of the day, “after having a successful restaurant and all of our experience and education, it was still people from the neighborhood who believed in us and invested in us.”