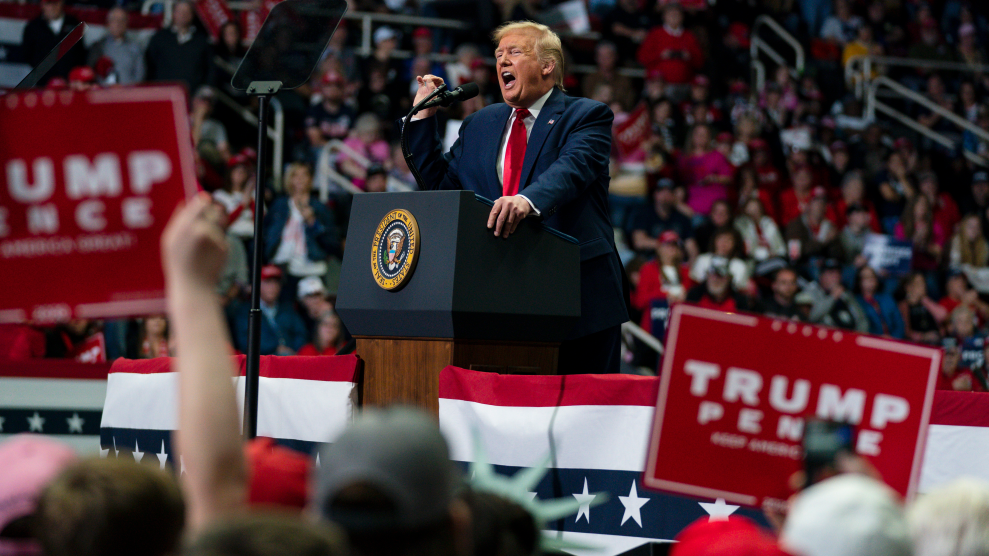 Chaos in the streets. Looters running free. Rioters threatening you and your family. Anarchists destroying…everything. And there’s only one way to stop the end of civilization: reelect Donald J. Trump as president.

That’s what Trump’s core campaign message is becoming. While once Trump intended to run in 2020 on the strength of the US economy, he has now shifted to a new narrative: Americans are in immediate danger due to the Black Lives Matter protests that have spread across the nation. Focusing on the limited violence and looting that has accompanied the demonstrations (which have mostly been peaceful), Trump is selling a dark and apocalyptic vision. The end is nigh, unless Trump can deliver the “LAW & ORDER,” he repeatedly vows in his tweets.

This isn’t any secret. On Thursday, his campaign sent out an email to supporters that began with this description of the present moment: “It’s past time for Democrat Mayors and Governors to get tough. Violent thugs are running rampant – these people are ANARCHISTS.” And the media, the missive noted, was in cahoots with the forces of disruption: “the Fake News has been inciting hatred and chaos.” But Trump, his campaign said, was standing strong in the face of this threat: “President Trump is working around the clock to restore LAW AND ORDER in these communities where liberal leadership has FAILED. It’s time for this madness to END.”

Look out your window. How much madness and chaos do you see? Nevertheless, Trump and his campaign want voters to believe their homes are about to be overrun by mobs associated with the ongoing protests against police violence and social inequities.

In the past week, Trump has repeatedly tweeted about antifa, the unorganized band of anti-government left-wing activists, as if it is the number one threat to the nation. (Coronavirus who?) Trump has often ignored the orderly protesters and, instead, zeroed in on the isolated incidents of violence, amplifying these actions. “If you watch Fake News @CNN or MSDNC,” he tweeted on June 3, “you would think that the killers, terrorists, arsonists, anarchists, thugs, hoodlums, looters, ANTIFA & others, would be the nicest, kindest most wonderful people in the Whole Wide World. No, they are what they are – very bad for our Country!” And on June 11, he posted a tweet that seemed to justify the security forces attack on peaceful demonstrators at Lafayette Square across from the White House, which cleared the way for Trump to conduct his Bible-holding photo-op stunt: “Our great National Guard Troops who took care of the area around the White House could hardly believe how easy it was. ‘A walk in the park’, one said. The protesters, agitators, anarchists (ANTIFA), and others, were handled VERY easily by the Guard, D.C. Police, & S.S. GREAT JOB!” (Trump even claimed in a tweet that a 75-year-old longtime peace activist who was pushed to the ground by a Buffalo police officer and seriously injured during a protest was an antifa provocateur.)

So this is Trump’s new playbook. But it’s really an old playbook. When Trump accepted the Republican presidential nomination at the party’s convention in 2016, he decried criminal violence and declared that if he were to be elected president he would “restore law and order to our country… I am the law and order candidate.” (“I alone can fix it,” he also said, referring to a nation supposedly racked with “death, destruction and weakness.”) During his inaugural address, Trump described the country in horrific terms—overrun by crime and gangs—and stated, “This American carnage stops right here and stops right now.” In the run-up to the 2018 mid-term elections, Trump asserted the nation was in peril due to the caravan of migrants who had approached the US-Mexican border seeking entry and asylum. He tried to manufacture a crisis—”very bad people” are coming to the United States—for political gain. It didn’t work; the Democrats won control of the House.

Of course, Trump—who weeks ago tweeted, “when the looting starts, the shooting starts”—isn’t the first conniving politician to cynically embrace law-and-order as a campaign mantra. And his current moves are being compared to those of Richard Nixon in 1968. As historian Rick Perlstein recently pointed out, Nixon’s “most famous campaign commercial was a montage of riot scenes over a jittery, shrieking electronic soundtrack, the camera lingering on the naked white torso of a mannequin. Then came Nixon’s voice: ‘So I pledge to you, we will have order in the United States.'” Nixon, though, was running as a challenger against Hubert Humphrey, who as the incumbent vice president could be targeted as one of the guys in charge as chaos, protest, and social disorder engulfed the United States.

Trump clearly wants to duck responsibility for the civil unrest that has occurred on his watch while positioning himself as the thin orange line between stability and societal collapse. It’s American Carnage, Part II. In this script, protesters are malicious marauders who are heading to your town. And Trump alone can protect you and your loved ones from the angry (black?) hordes. It’s a campaign of fear and loathing. It trades racist dog whistles for bullhorns. As millions of Americans are rising up to demand adherence to the nation’s professed values of justice and equality, Trump is fostering an atmosphere of darkness, despair, and doom. Be scared, my fellow Americans, be very scared, he says. Because then he has a better chance of winning your vote.

This is the message his campaign has begun unleashing in a highly coordinated fashion. “The radical Democrats went off the deep end this week, voicing their full-fledged support for defunding our law enforcement while bending the knee to rioters and looters,” Kimberly Guilfoyle, national chair of the Trump Victory Finance Committee, huffed on Wednesday. Bending the knee to rioters? The intent of that clever phrase is obvious; it equates the demonstrations against police violence to acquiescence to looting. They are all thugs: Colin Kaepernick, Nancy Pelosi, the protesters, and the criminals. “It is vital that we re-elect President Trump to keep Joe Biden and the socialist mob from destroying everything that makes America great,” Mercedes Schlapp, a top strategist for the Trump campaign, proclaimed this week. “Trump is standing up for law and order, while the radical Democrats have refused to condemn violence in our cities and are working to defund the law enforcement officers who have prevented chaos in our streets.”

The buzz words are glaring. Let’s push those buttons: Chaos, mob, law and order. That’s the plan. Trump can no longer politically exploit the economy. He cannot tout (convincingly) his inept response to the coronavirus pandemic that has claimed the lives of over 110,000 Americans. He can only cook up a fictitious threat, incite terror, stir panic—and posture as the strong man who can beat back an imaginary calamity. He is a scared president trying to whip up phantom threats he can then boast of defeating. This is how he is appealing for support. This will likely be a key theme in the campaign rallies he is starting next week, with a kick-off in Tulsa, Oklahoma (where 99 years ago, there was indeed a race riot…with white people destroying a black neighborhood and massacring scores of its residents).

Trump likes chaos. He doesn’t play by the rules. He is not encumbered by truth or by norms of decency. His pitch now is that he can save America from anarchy and disarray. This latest con of his is hardly surprising. Perhaps the more troubling matter is how far Trump is willing to go as president to create the discord that he believes he needs to hold on to power.