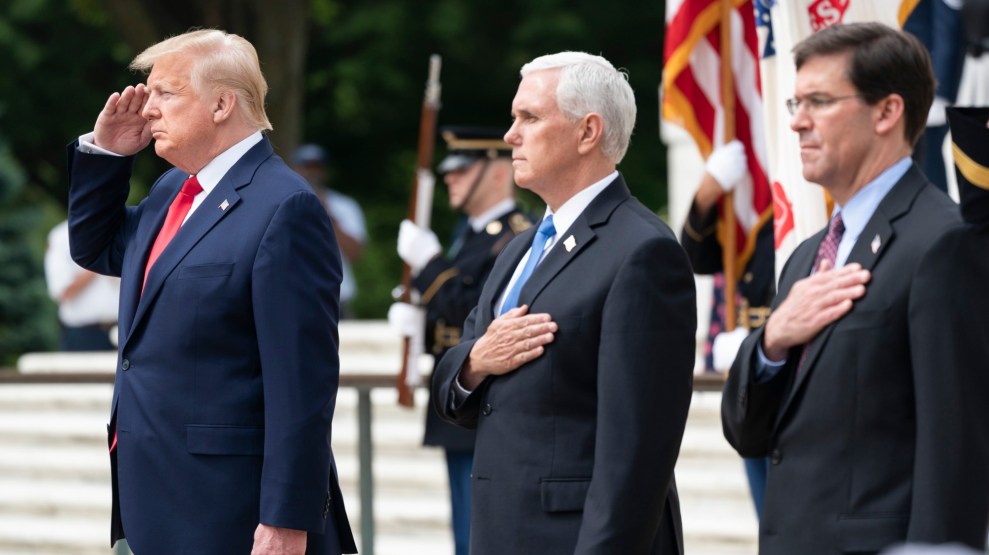 Defense Secretary Mark Esper, in a public press conference from the Pentagon Wednesday morning, said he does “not support invoking the Insurrection Act,” breaking with Donald Trump, who threatened Monday night to use the 1807 law as a way to have the military crack down on protesters nationwide.

Deploying active-duty troops “should only be used as a matter of last resort and only in the most urgent and dire situations,” Esper said, adding that “we are not in one of those situations now.”

The Pentagon’s civilian leader has been in the news over the last 48 hours for his role in Trump’s decision to stage a controversial photo op on Monday at a church near the the White House. Peaceful protesters who were gathered along the path were attacked with tear gas and rubber bullets to make way for Trump’s entourage. Reports emerged that DC National Guard members, in addition to the US Secret Service and Park Police, were tasked with the assault on the protesters, but Esper denied the group’s involvement. As for his own role, Esper said he went to the White House expecting to check in on Guard units, which is the same flimsy excuse Joint Chiefs Chair Mark Milley provided for his presence, only a day after Esper told NBC News that he thought they were going to look at a “vandalized bathroom” in Lafayette Square.

On Wednesday, Esper said he knew Trump wanted to go the church, but said he “did not know a photo op was happening.” As for the controversial plan to clear the park, which the Washington Post reported was due to Attorney General William Barr’s order, Esper said he “was not aware of law enforcement’s plans for the park or briefed on them.”

In recent days, Trump has openly mulled the benefit of using the military as a bulwark against protesters. Esper might have said he disagrees with that strategy, but he may not ultimately have a choice. On Monday, a National Guard medical helicopter was spotted flying close to the ground in what onlookers described as a menacing attempt to disperse protesters, a maneuver known as a “show of force” that the military has used in international combat zones but not meant to happen in a domestic policing context. Esper said Wednesday that he opened an investigation into the incident after confirming it was a military helicopter, but strained credulity by telling reporters he believed it was only out to observe a Guard checkpoint.