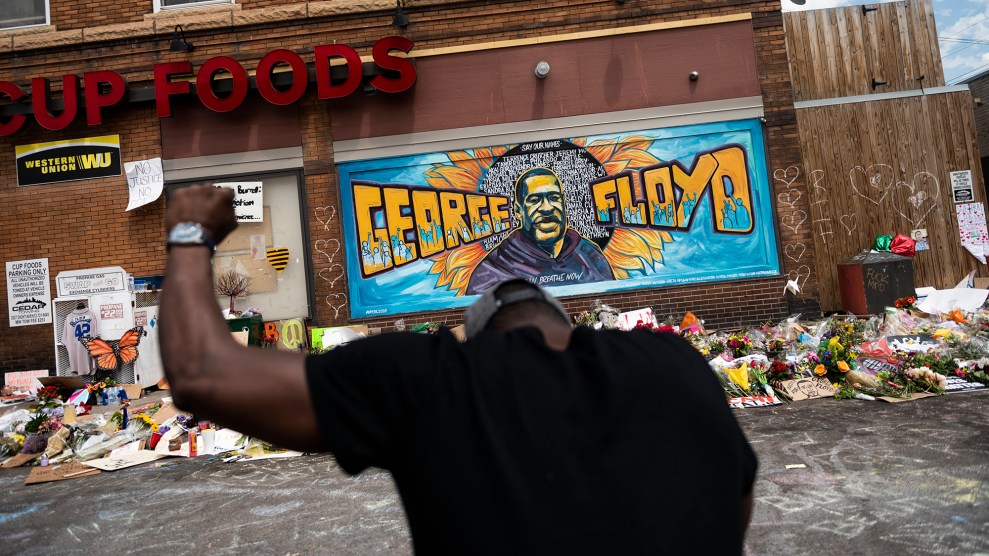 A man kneels and holds up his fist at a memorial site where George Floyd died May 25 while in police custody, on June 1, 2020 in Minneapolis, Minnesota.Stephen Maturen/Getty Images

Update 10am Tuesday: On Monday evening, the Hennepin County medical examiner released its full autopsy report on George Floyd. Unlike the county’s preliminary findings, the manner of death was listed as homicide. But the cause differed from the asphyxia finding of the private autopsy and continued to place more blame on underlying health conditions than the actions of the police officers: “Case of death: Cardiopulmonary arrest complicating law enforcement subdual, restraint, and neck compression.”

“Not only was the knee on George’s neck a cause of his death, but so was the weight of the other two police officers on his back, who not only prevented blood flow into his brain but also air flow,” Antonio Romanucci, a lawyer for the family, said Monday. Only Derek Chauvin, the officer who kept his knee on Floyd’s neck for nearly nine minutes, has been charged in Floyd’s death.

Floyd’s family hired Dr. Allecia Wilson of the University of Michigan and Dr. Michael Baden, a former New York City medical examiner, to determine the cause of death. Baden has previously conducted autopsies on Eric Garner, who died when police placed him in a chokehold in New York City in 2014, and like Floyd told officers he could not breathe, as well as Michael Brown, the 18-year-old black man shot and killed by a police officer in Ferguson, Missouri the same year. “The autopsy shows that Mr. Floyd had no underlying medical problem that caused or contributed to his death,” Baden said, according to the New York Times. “This is confirmed by information provided to Dr. Wilson and myself by the family.”

“Professional buffoonery at its best.”

The findings lie in stark contrast to the Hennepin County medical examiner’s initial conclusions, which seemed to absolve the officers of wrongdoing even as video evidence showed Floyd losing consciousness under their weight. “The autopsy revealed no physical findings that support a diagnosis of traumatic asphyxia or strangulation,” the criminal complaint filed by the state against Chauvin stated. “Mr. Floyd had underlying health conditions including coronary artery disease and hypertensive heart disease. The combined effects of Mr. Floyd being restrained by the police, his underlying health conditions and any potential intoxicants in his system likely contributed to his death.”

Video taken at the scene shows Floyd, a 46-year-old with a fit and slim physique, repeatedly claim he cannot breathe before losing consciousness and going limp, all while a police officer pressed a knee into his neck. When the county’s autopsy findings are read alongside, they come off as a remarkable attempt at gaslighting: Who are you going to believe, the medical examiner or your lying eyes?

The county medical examiner’s findings have been criticized by professionals beyond the team working with Floyd’s family. “I am extremely disappointed with, and pissed by the preliminary cause of death opinion of the Hennepin County Medical Examiner on the George Floyd case,” medical examiner and frequent expert witness Bennet Omalu tweeted. “Professional buffoonery at its best.” In a short blog post, Omalu added that “Human beings frequently die from asphyxial injury of the brain without any physical injury to the neck following compression of the neck” and that despite any other contributing factors, “the manner of death would be a homicide.”

Neither autopsy teams has released a final report. But it’s hard to believe that Floyd would be dead today had multiple officers not pressed his neck and back onto the street pavement until he lost consciousness.