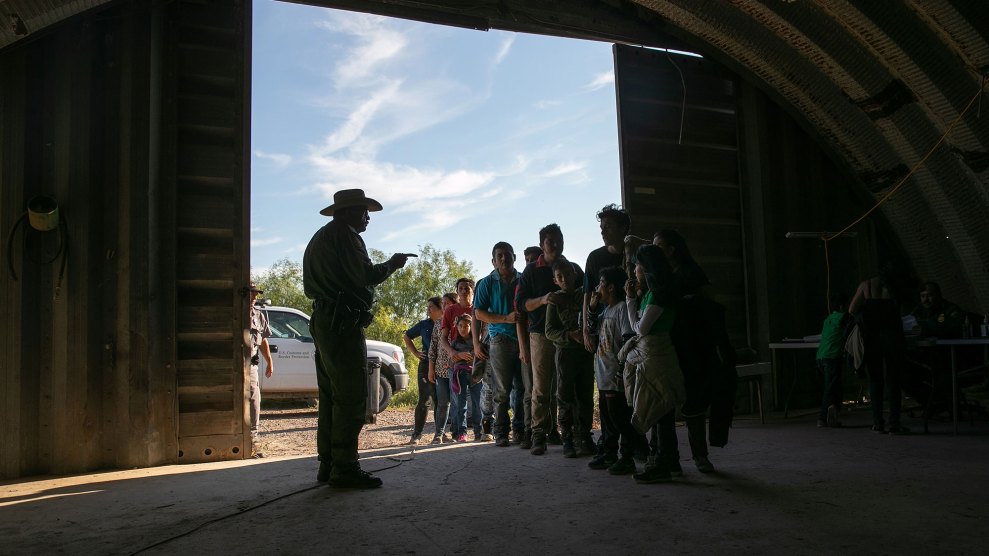 A Border Patrol agent in South Texas gives instructions to families, mostly from Central America, who had crossed the Rio Grande in September 2019.John Moore/Getty Images

Over the past couple of years, the Trump administration has been slowing chipping away at asylum seekers’ ability to seek refuge in the United States. With the advent of the coronavirus, Donald Trump and Stephen Miller finally had their chance to shut down the border indefinitely, ending asylum as we know it, at least through the 2020 election.

But on Wednesday, they proved that they won’t stop until the border is virtually sealed to asylum seekers in the future—COVID-19 or not. The Department of Homeland Security posted 161 pages of proposed regulations that, according to advocates and attorneys, include virtually everything the White House has wanted to do to gut asylum in the United States.

Before most of us could finish reading the dense, legalistic document, Aaron Reichlin-Melnick already had broken it down on Twitter, calling the “Kafkaesque” new rules a “sick joke.” So I called Reichlin-Melnick, policy counsel at the American Immigration Council, to make sense of what these proposed changes could mean for tens of thousands of people who are seeking refugee here. “The top line here is that the Trump administration is frustrated that it’s been losing in court on the definition of asylum,” he said. “So rather than accept that its definition is wrong, it wants to simply change the rules and declare itself the winner.”

The proposed changes would create brand new bars for asylum and redefine what asylum means. Essentially, Reichlin-Melnick said, the Trump administration is saying: “If we don’t get you one way, we’re going to get you another way. If we don’t get you a third way, we’ll get you a fourth way. Every single one of these things are overlapping tools to ensure that no one wins asylum.”

Here are some of the most egregious proposed rules that Reichlin-Melnick flagged:

Many of these changes hinge on what it means to be a member of a “particular social group” when claiming persecution. But Reichlin-Melnick says that’s problematic because “particular social group” has no definition written into law, so “they are trying to overturn generations of law that define what it means to be a refugee to fit their narrow definition—which would exclude most people who currently win asylum in the United States.”

Starting Monday, there will be a 30-day comment period open for responses; by law, the government then has to review the comments before issuing the final rule. Reichlin-Melnick said it’s unlikely that we’ll see a final version of this rule anytime before the fall, and that it may not even be set in stone until after the election (a new president or a new Congress could overturn the rule). He said some of the “more blatantly illegal provisions” could be taken out between now and the final draft: “But the fact that they included those shows how little they’re concerned with following the law and how much they want to simply rewrite asylum law to do what they want.